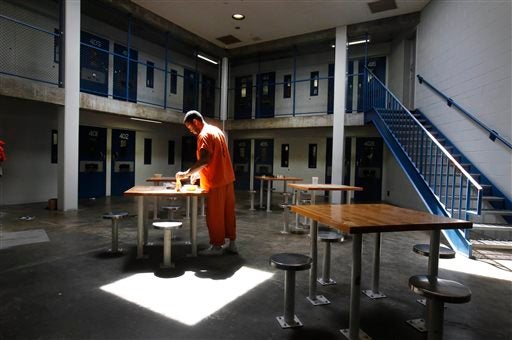 SACRAMENTO, Calif. (AP) – Some of California’s most dangerous inmates could be getting more sleep under an agreement announced Thursday that requires guards to hold down the noise.

Dozens of prisoners complained that they were being kept awake around the clock by overnight welfare checks every half-hour.

Under the agreement between attorneys representing inmates and the state, guards in Pelican Bay State Prison’s notorious security housing unit will conduct the checks half as often between 10 p.m. and 6 a.m. to minimize the clanging of metal doors.

Guards are even handing out earplugs to help inmates rest.

Department of Corrections and Rehabilitation spokesman Jeffrey Callison said the department has asked the manufacturer to look at how the doors operate and propose ways to reduce the noise.

The checks began in August as a way to deter suicides. But attorneys say the resulting sleep deprivation was causing health problems and psychological stress.

The welfare checks have been used successfully at other state prisons.

But the noise agreement filed with a federal judge in Sacramento says the unique design of the security housing unit is causing the problems. Guards have to enter each pod of cells through a metal door, then climb up and down metal stairs to make their rounds.

The segregation unit houses about 1,100 gang leaders and those who commit serious crimes behind bars.

It’s at the center of a landmark court settlement in September that effectively ends indefinite solitary confinement in California state prisons.