Goose and miniature horse looking for forever home together 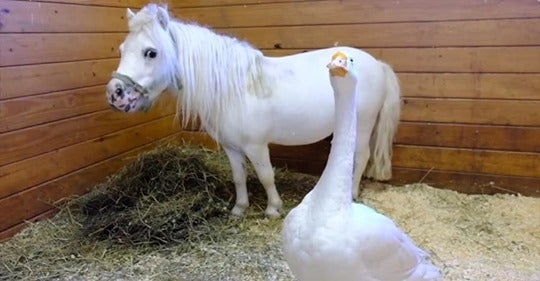 BUCKS COUNTY, Pa. (CNN) – Good friends may be hard to come by – but as many people know, they can come in any size or shape – and any species too!

Bucks County’s SPCA adopts out big animals, depending on your definition of big.

Waffles may be small, but his personality isn’t.

He loves grass and carrots, and there’s one other thing that he loves.

This mini horse and Hemingway, a goose, are best buddies.

A package deal – like two peas in a pod – that go way back.

“These animals were removed under warrant from a farm. The conditions were not good,” Reider said.

Perhaps that removal bonded them.

When Waffles was sick, Hemingway was apparently comforting and also protective.

“When we go to give medicines or injections Hemingway would get in between and say, ‘I’m sorry, that’s my buddy the horse, he doesn’t want a shot today!!’” said Reider.

Waffles hasn’t been cleared for adoption just yet, but once he is approved Bucks County SPCA will begin accepting applications. Just remember, they’re a package deal.