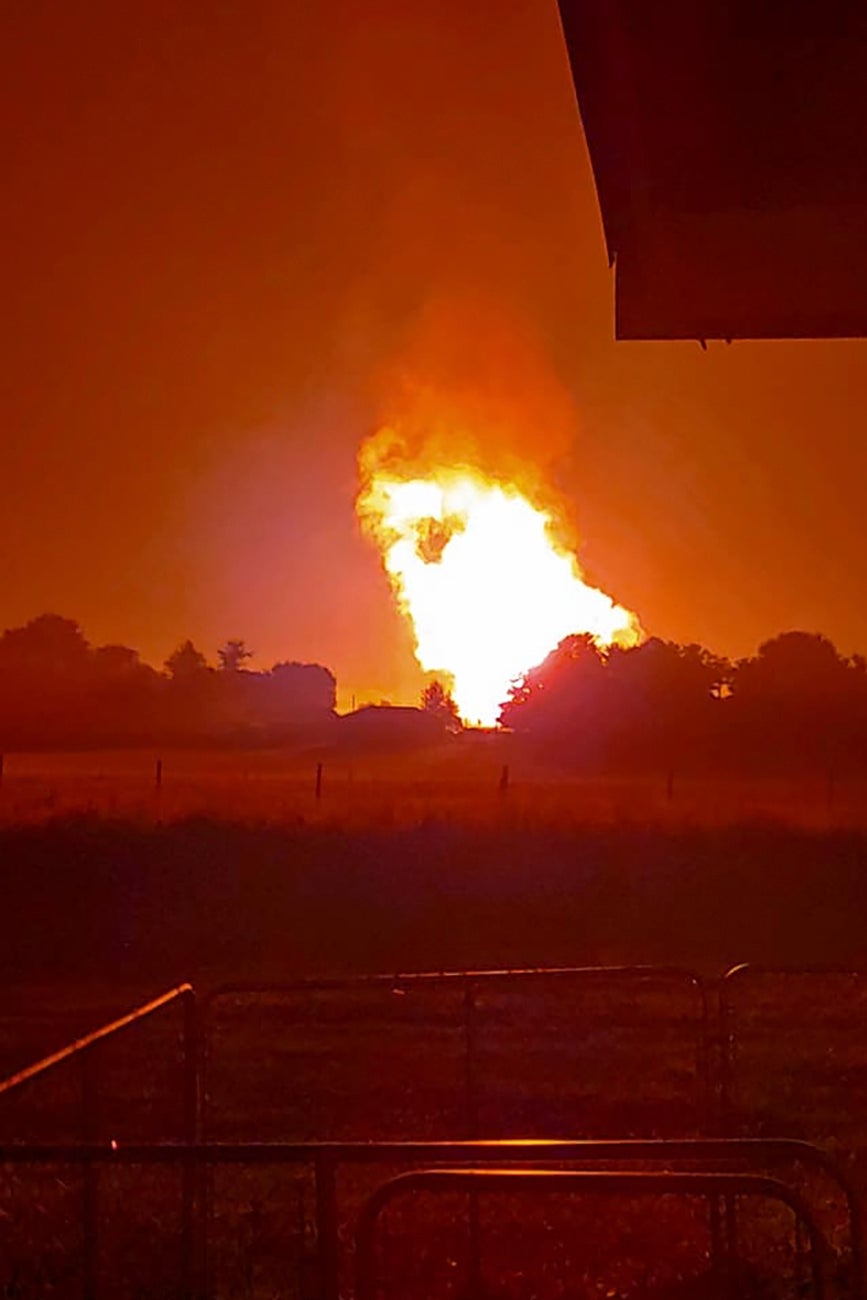 “The part of the area that has been compromised, there’s just nothing left,” Gilliam said when asked whether residents might return to their trailer homes. “The residences that are still standing or damaged will be accessible. There doesn’t really look like there’s any in-between back there. They’re either destroyed or they’re still standing.”

Kentucky State Police spokesman Robert Purdy said at least five homes were completely destroyed and structures within 500 yards (457 meters) had damage. He said a handful of people who were missing after the blast have now been accounted for.

The 30-inch (76-centimeter) wide pipeline moves natural gas under such high pressure that the flames reached about 300 feet (91 meters) in the air and could be seen throughout the county, he said.

The explosion around 1 a.m. was so huge that it showed up on radar, according to a tweet from WKYT-TV meteorologist Chris Bailey. It took hours for firefighters to douse the flames, with trucks repeatedly refilling their tanks and returning to the scene.

Purdy said the fire burned so hot that it left the landscape barren, burning trees and grass and leaving only red dirt, rocks and gravel.

Nearby residents said they were awakened by the initial blast.

Naomi Hayes told The Associated Press that she lives within a mile of the scene and felt her home shake, then saw light outside the window.

“It was so bright that it was like daylight outside, just with an orange tint,” she said.

“When we went out the door, we could see the flames. They were so high and so bright … and the noise was insane,” she said about the burning fire. “It was a roar, like a monster roar. We had to yell to talk to each other. That’s how deafening it was.”

Another nearby resident, Sue Routin, told WLEX-TV that the blast shook her home too.

“It woke us up and it was just a big roar and it was fire going up into the sky as far as you could see,” she said. “Our windows were shaking really bad, and our doors and the ground, you could hear the ground just moving and tumbling and rolling. And then we got to feeling the heat from the fire, so we got in our vehicle and took off to get away from it.”

Purdy said the woman who died was taken to the medical examiner’s office in Frankfort to determine her cause of death. Purdy said it appears she may have left her home due to the fire and was overtaken by the heat. Lincoln County Coroner Farris Marcum identified the woman as Lisa Denise Derringer, 58, of Stanford.

Emergency managers said the rupture involved the Texas Eastern Transmission pipeline, which is owned and operated by Enbridge. The pipeline stretches several thousand miles from the Mexican border in Texas to New York City. A statement from the company based in Calgary, Canada, said “Enbridge is aware of and is responding to a rupture on the Texas Eastern system in Lincoln County.”

Enbridge spokesman Jim McGuffey said two other nearby gas lines don’t appear to be affected but will be inspected. He said there’s no indication of what might have caused the explosion.

The blast also damaged railroad tracks, forcing 31 trains to back up overnight, authorities said. Crews were working to repairs the tracks. Purdy said the track should reopen later in the day.

Some 75 people in the Indian Camp trailer park in the Moreland community were evacuated to the New Hope Baptist Church in Stanford. Gilliam encouraged anyone who fled the scene and hasn’t been accounted for to check in at the church. Authorities also urged people gathering for the multistate 127 Yard Sale to stay away as crews worked to contain the damage.

Gilliam said residents whose homes are still standing should be allowed back in later in the day.

Purdy said several agencies are investigating to determine what caused the explosion.

The National Transportation Safety Board said it is sending three investigators to the site.

This story has been corrected to say the pipeline is several thousand miles long, instead of more than 9,000 miles long.