Lock of Lincoln’s hair and bloodied telegram up for auction 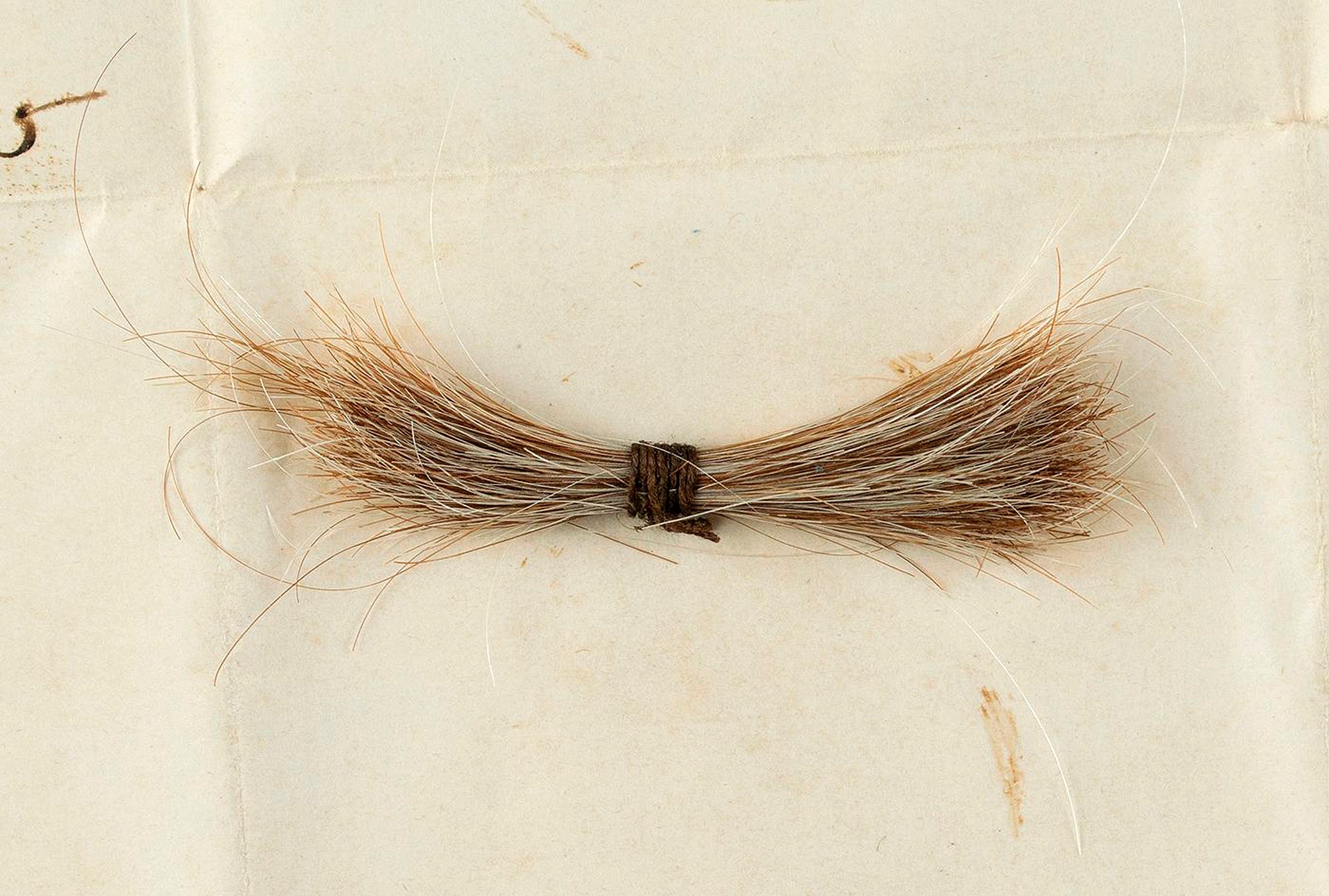 This July 2020 photo released by RR Auction shows a lock of hair from former President Abraham Lincoln, to be auctioned Sept. 12, 2020, by the Boston-based auction firm. The lock of hair was removed during Lincoln's postmortem examination in April 1865 after he was fatally shot by John Wilkes Booth at Ford's Theatre in Washington. (Nikki Brickett/RR Auction via AP)
by: WILLIAM J. KOLE, Associated Press
Posted: Aug 28, 2020 / 05:44 PM EST / Updated: Aug 28, 2020 / 05:44 PM EST

(AP) — This is one macabre auction: A lock of Abraham Lincoln’s hair, wrapped in a bloodstained telegram about his 1865 assassination, is up for sale.

Boston-based RR Auction said bidding has opened online for the items ahead of a live auction scheduled for Sept. 12 in New Hampshire. The auction house set the minimum bid at $10,000 but expects the lock and telegram to fetch $75,000 or more, spokesman Mike Graff said.

Measuring roughly 2 inches (5 centimeters) long, the bushy lock of hair was removed during Lincoln’s postmortem examination after he was fatally shot at Ford’s Theatre in Washington, D.C., by John Wilkes Booth.

It was given to Dr. Lyman Beecher Todd, a Kentucky postmaster and a cousin of Mary Todd Lincoln, the 16th president’s widow, Graff said. The physician was present when Lincoln’s body was examined, he added.

The hair is mounted on an official War Department telegram sent to Dr. Todd by George Kinnear, his assistant in the Lexington, Kentucky, post office. The telegram was received in Washington at 11 p.m. on April 14, 1865.

A caption typed by Todd’s son reads: “The above telegram … arrived in Washington a few minutes after Abraham Lincoln was shot. Next day, at the postmortem, when a lock of hair, clipped from near the President’s left temple, was given to Dr. Todd — finding no other paper in his pocket — he wrapped the lock, stained with blood or brain fluid, in this telegram and hastily wrote on it in pencil: ‘Hair of A. Lincoln.’”

Dr. Todd gave a slightly different account later in life, writing in 1895 — three decades after the assassination, and seven years before his own death — that he clipped the lock of hair himself.

In Lincoln-era papers kept at Allegheny College in Meadville, Pennsylvania, he wrote in an account of the autopsy: “When all was over, General Hardin entered, and handed me a pair of scissors, requesting me to cut a few locks of hair for Mrs. Lincoln. I carefully cut and delivered them to General Hardin, and then secured one for myself which I have preserved as a sacred relic.”

Could scientists clone Lincoln from the lock? Forget about it. Hair follicles rarely contain viable DNA, the genetic material that maps human beings.

RR Auction said it vouches for the authenticity of the lock and telegram, in part based on a 1945 letter written by Dr. Todd’s son, James Todd. The letter says the clipping of hair “has remained entirely in the custody of our family since that time.” It last was sold in 1999, the auction house said.

Bobby Livingston, executive vice president of RR Auction, disputes the notion that the offerings — particularly the lock — are a little on the dark side.

“It’s not macabre. It’s a fascinating artifact from a horrible tragedy,” he told The Associated Press in a telephone interview. “Collecting locks of hair was common after someone passed away. It’s such a piece of history. The assassination of President Lincoln was obviously such a shock.”

Historians say the telegram itself is significant because it disproved a conspiracy theory that then-Secretary of War Edwin Stanton plotted to kill Lincoln because of their personal and political differences.

At the time, some claimed that Stanton ordered military communications to be disrupted, allowing Booth to briefly elude his captors. The time stamp on the dispatch shows that military telegraph lines were, in fact, functioning on the night Lincoln was assassinated.

The telegram “is evidence to disprove the misinformation and conspiracy theories in the Lincoln assassination,” Graff said.