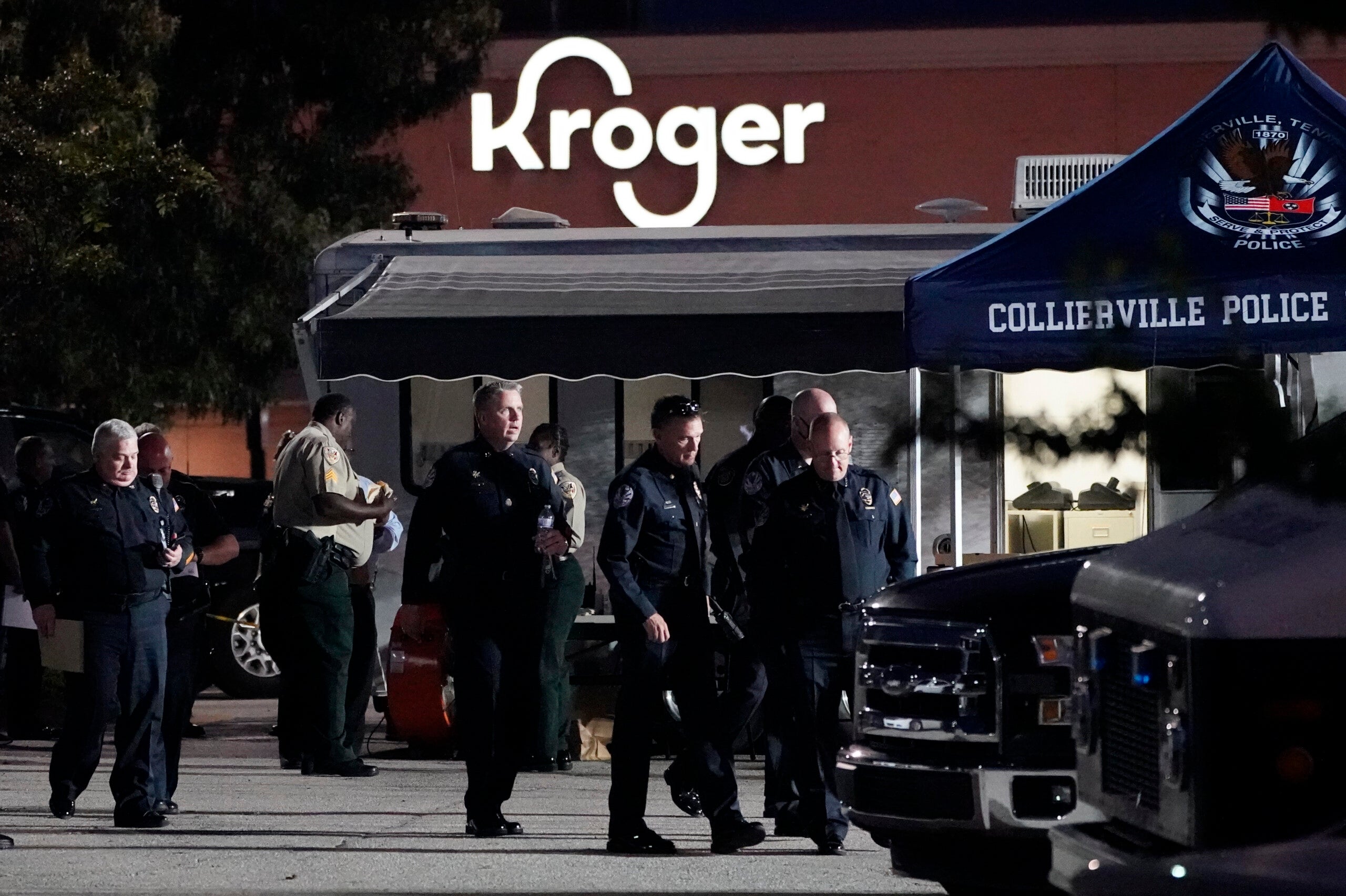 Law enforcement personnel work in front of a Kroger grocery store as an investigation goes into the night following a shooting earlier in the day on Thursday, Sept. 23, 2021, in Collierville, Tenn. Police say a gunman attacked people in the store and killed at least one person and wounded 12 others before the suspect was found dead. (AP Photo/Mark Humphrey)
by: Madeline Holcombe and Rebekah Riess, CNN
Posted: Sep 27, 2021 / 08:29 PM EST / Updated: Sep 27, 2021 / 08:44 PM EST

(CNN) — Investigators have learned that the shooter identified in an attack Thursday at a Tennessee Kroger, which killed at least one person and wounded 14, was asked to leave his job that morning, according to an update provided by the Collierville Police Department on Monday.

The shooter, identified by police as 29-year-old U.K. Thang, moved into Collierville in the summer of 2020 and was a third-party vendor working inside Kroger, the update said.

Collierville Police are processing electronic evidence, as well as the crime scene vehicles, and interviewing other potential witnesses in the case, the update said.

“With active police investigations, many of the case details cannot be shared until the investigation is complete,” the release added.

When the shooting began Thursday, 44 employees were working in the store, Police Chief Dale Lane said. By the end, at least one person, customer Olivia King, was killed in the chaos, Kroger said.

“Our family is devastated by this senseless act of violence,” King’s family said in an earlier written statement. The asked for prayers “for all families and friends affected by the events today, as well as for God’s mercy on the shooter and his family.”

In total, the man shot 10 employees and five customers. Of those wounded, four victims remain at Regional One Hospital in Memphis in stable condition, according to the release

The shooter was found dead, apparently of a self-inflicted gunshot wound, Lane said.

In the coming days, officials from the town and Kroger are expected to meet to discuss the re-opening of the Kroger store, as well as next steps involving employee and community support, the update said.

Shootings have happened in at least two other grocery stores this year. In March, a mass shooting in Boulder, Colorado, left 10 people dead. And one person was killed in a supermarket shooting in West Hempstead, New York, in April.

Around 1:30 p.m. CT on Thursday, the Collierville Communications Center received a 911 call about an active shooter at the Kroger, Lane told reporters outside the store. There actually was a patrol car near the store when the 911 call came in, Lane said.

Brignetta Dickerson was working the cash register when she said the shooting began in the deli section.

She said she ran with some of her coworkers to hide but the gunman came right behind them and started shooting.

Dickerson, who has worked at Kroger for 32 years, said she was alright, but a little scared and shaky.

When officers entered the store, they found people who had been shot. A SWAT team, patrol officers and other command staff members went aisle to aisle and room to room, bringing out employees who were hiding and helping the injured victims, Lane said.

Some people “were (down on the ground) pretending to be shot,” and an employee who ran to the roof was eventually escorted down, he said.

Several employees were found hiding in freezers or locked in offices. “They were doing what they had been trained to do: Run, hide, fight,” Lane said.

The shooting was over minutes after police received a call, and investigators believe the gunman fatally shot himself “as we were pulling up to the scene,” Lane said.