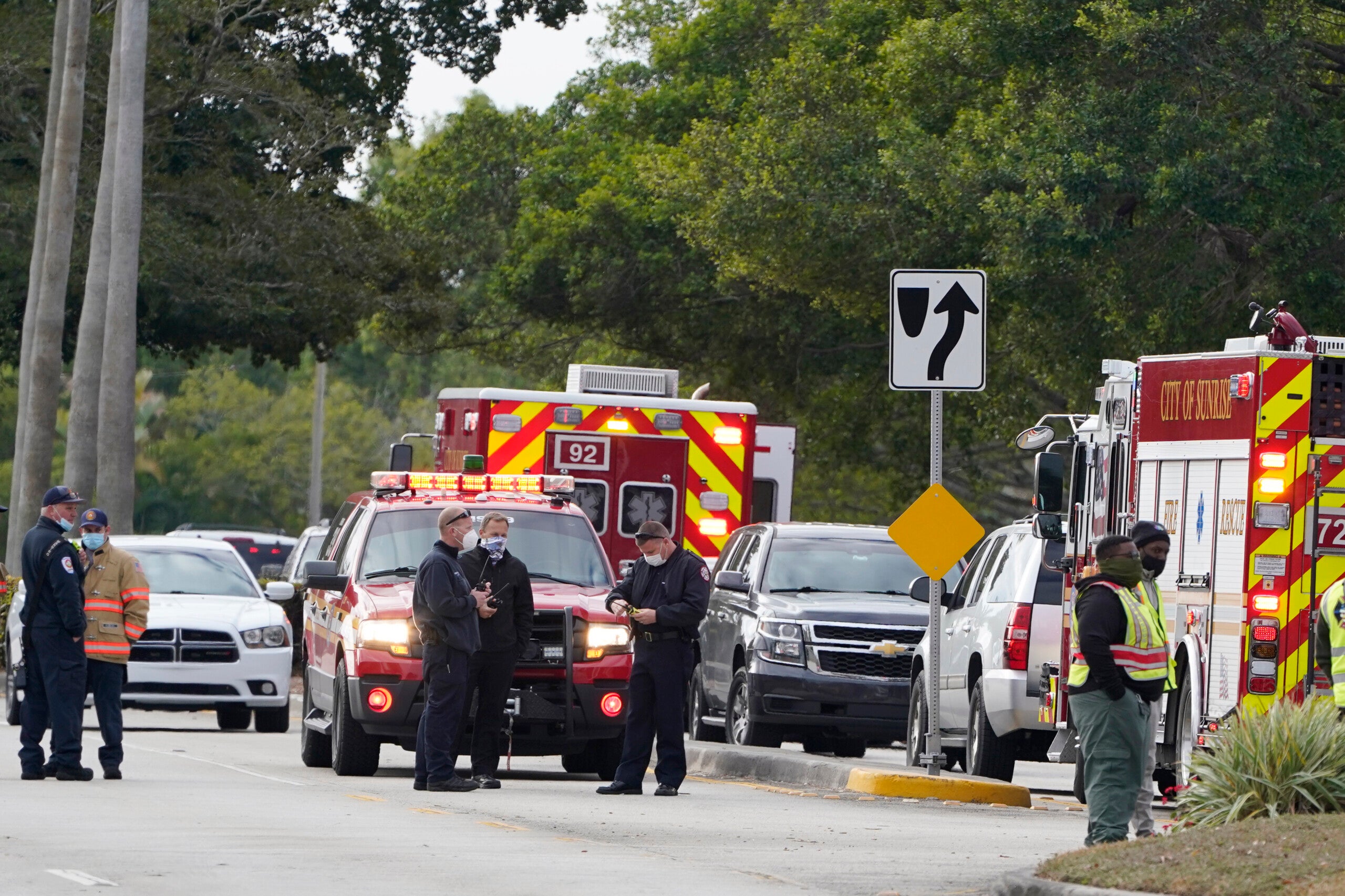 SUNRISE, Fla. (AP) — Two FBI agents were killed and three wounded in a shooting that erupted on Tuesday when they arrived to search an apartment in a child pornography case, a confrontation that marked one of the bloodiest days in FBI history. The suspect is believed to have killed himself.

The violence forced residents in the Fort Lauderdale suburb of Sunrise to huddle inside their homes as a SWAT team stormed the apartment building and police helicopters circled overhead.

FBI Director Christopher A. Wray identified the two slain agents as Daniel Alfin and Laura Schwartzenberger, both of whom specialized in investigating crimes against children.

Two of the wounded agents were taken to hospitals to be treated and were in stable condition, Leverock said. The third did not require hospitalization, Wray said.

Based on a preliminary investigation, federal officials believe the suspect fatally shot himself, according to a law enforcement official familiar with the matter. The person cautioned that an official cause of death has not yet been determined and spoke to The Associated Press on condition of anonymity because they were not authorized to discuss the investigation publicly.

The shooting happened around 6 a.m. in a middle-class neighborhood of single family homes, duplexes and apartment buildings located west of Fort Lauderdale, near the Everglades.

At first McLymont thought the gunfire was a car backfiring, then two minutes later he heard about five more shots. He went outside and looked over his fence as police cars and ambulances rushed in. Then he saw officers working on someone lying on the ground before they loaded the person into an ambulance.

A SWAT team appeared next, with officers donning riot gear. Then they went around the building, yelling, “Go, go, go!” McLymont said. He said he couldn’t see the apartment where the shooting happened from his location.

Hours later, Sunrise Police urged residents of Water Terrace to remain inside their homes while law enforcement blocked the entrances to their community.

The FBI agents had come to the apartment complex to serve a federal search warrant in connection with a case involving child pornography and violent crimes against children, according to Miami FBI Agent Michael D. Leverock and FBI Agents Association President Brian O’Hare.

The shootings marked one of the bloodiest days in FBI history in South Florida and among the deadliest nationally as well, according to the FBI website.

Schwartzenberger, 43, had been an agent with the FBI since December 2005 and worked in the Miami field office on a squad of agents handling violent crimes against children, according to court records. Her work primarily focused on tracking offenders who sexually exploit children online and investigating other crimes against children.

Alfin, 36, who also investigated child exploitation cases, had previously worked at FBI headquarters handling major cases involving violent crimes against children, according to court records. He had a degree in information technology and went through the FBI’s specialized training programs for cybercrimes. He was involved in a major child exploitation investigation dubbed Playpen that resulted in arrests around the world.

“Special Agent Alfin and Special Agent Schwartzenberger exemplified heroism today in defense of their country,” Wray said. “The FBI will always honor their ultimate sacrifice and will be forever grateful for their bravery.”

After the shootings Tuesday, police motorcycles with their lights flashing escorted a fire rescue truck as it brought the body of one of the agents to the medical examiner’s office in nearby Dania Beach. Law enforcement officials from numerous agencies lined up to pay their respects as a flag-covered body was removed from the vehicle and taken inside.

Alex Piquero, a University of Miami sociology professor who has specialized in criminology, said serving search warrants at a person’s home is incredibly hazardous for law enforcement officers.

“Serving warrants, next to domestic dispute calls and high speed chases, are among the most dangerous for law enforcement — they don’t know what awaits them on the inside,” Piquero said.

There have been several other shootings throughout the FBI’s history in which two agents have died, according to the bureau’s Wall of Honor.

In South Florida, the infamous “Miami Shootout” in 1986 claimed the lives of Agents Ben Grogan and Jerry Dove in a gunbattle with two heavily armed robbery suspects who were also killed. Five other FBI agents were wounded in that shooting, which led the bureau to upgrade the weapons that agents carry.