Police: 3 hurt in shooting outside mall in DC suburbs 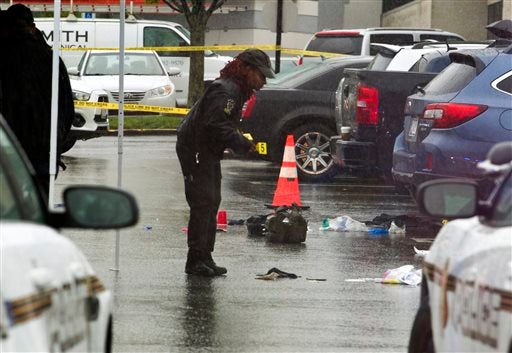 BETHESDA, Md. (AP) – The Latest on the three fatal shootings in the Washington suburbs (all times local):

Authorities say a suspect in three fatal shootings in the Washington, D.C., area has been taken into custody.

Police announced at a news conference Friday that 62-year-old Eulalio Tordil had been taken into custody without incident. Tordil is an employee of the Federal Protective Service, which provides security at federal properties. He was put on administrative duties in March after a protective order was issued against him.

The first shooting occurred Thursday at a high school. The second occurred in a mall parking lot Friday morning and the third happened about 30 minutes later at a nearby shopping center.

Police say a two people are dead and two others are wounded after two shootings at a mall and a shopping center in the Washington suburbs.

Police said a woman was shot earlier at a grocery store about 5 miles away. Police later tweeted that the woman has died. It’s not clear if the shootings are connected.

Police in Maryland say a woman is dead and three people are injured in shootings at a mall and a shopping center in the Washington suburbs.

Montgomery County Police Assistant Chief Darryl McSwain says three people were shot in the Westfield Montgomery Mall parking lot in Bethesda on Friday morning. He says one person was shot and two others may have been shot coming to that person’s aid. He says there’s no reason to believe the victims knew the shooter.

McSwain says a woman was shot at a grocery store about 5 miles away. Police later tweeted that the woman has died. It’s not clear if the shootings are connected.

McSwain says no one is in custody, but police are looking at a person of interest.

We Stand Together / 44 mins ago