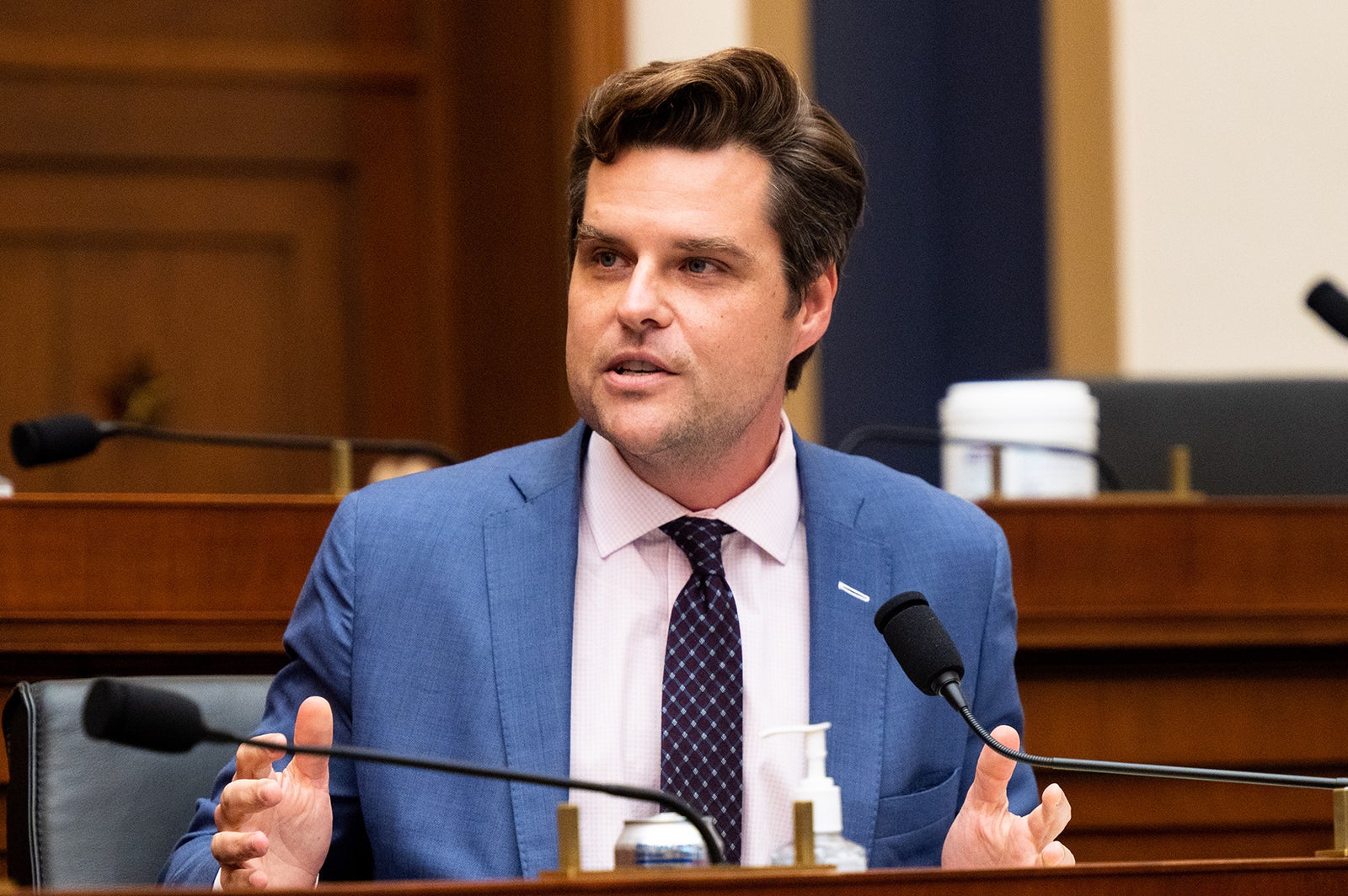 September 29, 2020 - Washington, DC, United States: U.S. Representative Matt Gaetz (R-FL) speaking at a House Judiciary Committee markup hearing on H.R. 7370, the Protecting Employees and Retirees in Business Bankruptcies Act of 2020; H.R. 2648, the Student Borrower Bankruptcy Relief Act of 2019; H.R. 8366, To amend title 11 of the United States Code to increase the amount of the allowable homestead exemption or the Protecting Homeowners in Bankruptcy Act of 2020; H.R. 8354, to establish the Servicemembers and Veterans Initiative within the Civil Rights Division of the Department of Justice, and for other purposes or the Servicemembers and Veterans Initiative Act of 2020; and H.R. 5227, the Technology in Criminal Justice Act of 2019. (Photo by Michael Brochstein/Sipa USA via CNN)
by: Evan Perez, Jeremy Herb, Ryan Nobles and Katelyn Polantz, CNN
Posted: Mar 31, 2021 / 04:50 AM EST / Updated: Mar 31, 2021 / 08:37 PM EST

(CNN) — The Justice Department is investigating Rep. Matt Gaetz over allegations involving sex trafficking and prostitution, including involving a minor, according to a person familiar with the investigation.

Federal investigators are examining whether Gaetz had a sexual relationship with a 17-year-old girl, reported The New York Times, which first disclosed the investigation into Gaetz. The Florida Republican denied the allegations Tuesday and claimed they were part of an extortion plot against him.

A person briefed on the probe confirmed to CNN that federal authorities were investigating Gaetz as part of a broader probe into trafficking allegations against another Florida politician, an investigation that began in the closing months of the Trump-era Justice Department under Attorney General William Barr.

The Times reported that investigators were examining whether Gaetz violated federal sex trafficking laws, including whether Gaetz had a sexual relationship with the 17-year-old girl and whether he paid for her to travel with him. Gaetz has not been charged with any crimes.

Gaetz was shopping for a lawyer a few weeks ago, approaching at least one major criminal defense firm in Washington, DC, to represent him, according to a person familiar with the matter.

On Tuesday evening, Gaetz said the allegations were completely false. He also claimed that they stemmed from an extortion plot against him and his family, saying in a statement to CNN that “no part of the allegations against me are true” and that the claims were being pushed by people who are targets of an “ongoing extortion investigation.”

“Over the past several weeks my family and I have been victims of an organized criminal extortion involving a former DOJ official seeking $25 million while threatening to smear my name. We have been cooperating with federal authorities in this matter and my father has even been wearing a wire at the FBI’s direction to catch these criminals,” Gaetz claimed.

“The planted leak to the New York Times tonight was intended to thwart that investigation. No part of the allegations against me are true, and the people pushing these lies are targets of the ongoing extortion investigation. I demand the DOJ immediately release the tapes, made at their direction, which implicate their former colleague in crimes against me based on false allegations,” Gaetz added.

Pensacola, Florida-based federal prosecutors are examining the extortion allegations, according to one source, which is being handled separately from the investigation of Gaetz. The source did not disclose who was being investigated for the extortion.

Gaetz, who was elected to Congress in 2016, is one of former President Donald Trump’s staunchest defenders in Congress. He is a frequent guest on Fox News and conservative cable outlets, and Axios reported hours before the news broke about the DOJ investigation that he was considering leaving Congress for a job at Fox News’ conservative rival Newsmax.

Federal authorities are investigating Gaetz as part of a broader probe into Joel Greenberg, the person briefed on the probe told CNN, a former county official in Central Florida who was arrested last year on charges that include sex trafficking of a minor. Greenberg has pleaded not guilty and is set to go on trial.

Public integrity prosecutors in Washington, DC, and Tampa are overseeing the Gaetz investigation, the person added.

Barr “was briefed on the Gaetz investigation multiple times” before he left office, according to a source familiar with the matter. The source said Barr did not object to the investigation. Barr had issued a memo during his tenure requiring leadership be notified of any probes of politically sensitive investigations.

The Department of Justice declined to comment. In a statement to CNN, the FBI in Jacksonville said, “The FBI declines to confirm nor deny the existence or status of an investigation.”

In an interview on Fox News Tuesday evening, Gaetz strongly denied the accusations.

“The person doesn’t exist. I have not had a relationship with a 17-year-old. That is totally false. The allegation is, as I read in the New York Times is, I have traveled with some 17-year-old in some relationship. That is false and records will bear that out to be false,” Gaetz said.

Gaetz also accused a former Department of Justice prosecutor, David McGee, of attempting to extort him and his family over the allegations.

McGee, in a statement Wednesday, denied that he is involved in attempts to extort Gaetz or is connected to the DOJ investigation.

“Congressman Matt Gaetz made an allegation on The Tucker Carlson show last night that David L. McGee, a partner in the firm of Beggs & Lane, had attempted to extort money from Gaetz and his family in exchange for McGee making the investigation against Congressman Gaetz ‘go away.’ The allegation by the Congressman is both false and defamatory,” McGee’s law firm said in a statement. “While he was with the DOJ he would never have entertained a scheme such as what Congressman Gaetz suggests nor would he today. Unsubstantiated allegations do not change that fact.”

The Washington Post reported Wednesday that Gaetz’s father, Don Gaetz, was presented with a proposal by two men to help his son if he donated a sum of money to fund the effort to locate Robert Levinson, a former FBI agent kidnapped in Iran, it could help his son’s situation.

Later Wednesday, the Washington Examiner said it had obtained documents in Gaetz’s possession purporting to lay out the alleged extortion scheme. The documents included a text message saying the sender could make Gaetz “future legal and political problems go away” and an unsigned document titled “project homecoming.” The document had no markings indicating the author.

That document suggested the FBI “became aware of compromising pictures” of Gaetz and another election official involved with “underage prostitutes” during an unrelated investigation into political corruption. It suggests that Gaetz can mitigate his potential legal troubles by arranging for the funds needed to release Levinson from captivity in Iran.

“If there is a tape, play the tape,” McGee told the newspaper. “There is nothing on that tape that is untoward. It is a pleasant conversation of a dad concerned about his son and the trouble his son was in.”

Don Gaetz’s lawyer Jeffrey Nieman, said in response to CNN’s request for comment, “I am not commenting at this time.”

Democrat calls for Gaetz to be removed from committee

The allegations against Gaetz prompted one House Democrat, Rep. Ted Lieu of California, to call on Gaetz to be removed from the House Judiciary Committee pending the outcome of the reported investigation.

But Rep. Jim Jordan of Ohio, the top Republican on the panel, said in a statement to CNN Wednesday that Gaetz should remain on the committee.

“I believe Matt Gaetz. He should not be removed from the Judiciary Committee,” Jordan said.

McCarthy said Wednesday on Fox News there were “serious implications,” and he would remove him from the House Judiciary Committee if they were true. He said that he had not yet spoken to Gaetz but planned to later Wednesday.

“There was a New York Times story that I read, I haven’t been able to talk to Mr. Gaetz yet. Mr. Gaetz denies the story. I look forward to talking to Mr. Gaetz,” McCarthy said at a town hall event in Iowa Wednesday. “I haven’t heard anything from the DOJ or others, but I will deal with it if anything comes to be true.”

The Times reported Tuesday that it was not clear how Gaetz met the 17-year-old girl, but that federal investigators were examining encounters that allegedly took place about two years ago, according to two of their sources.

Gaetz told the newspaper in an interview that his lawyers had been in contact with the Justice Department. He said they were told he was the subject, not the target, of an investigation.

“I only know that it has to do with women,” Gaetz told the Times. “I have a suspicion that someone is trying to recategorize my generosity to ex-girlfriends as something more untoward.”

The investigation into Greenberg, a former Seminole County, Florida, tax collector, resulted in an indictment last June on allegations of elaborate schemes against a political opponent and making fake IDs. He now faces 12 counts, including one charge for sex trafficking a child between 14 and 17 years old, though allegations details there available in court records are scant.

The bulk of his current charges revolve around accusations Greenberg stalked and harassed a political opponent who worked at a school, by trying to falsely frame the person as a white supremacist and child abuser, on a fake Twitter account he allegedly set up using the person’s name and photograph and in nine letters he mailed to the school where he posed as an anonymous student.

He is also accused of making fake driver’s licenses. He has pleaded not guilty and is in jail pending his trial, after he broke his bail terms earlier in March.

New criminal charges were made public Wednesday against Greenberg related to his business ventures and actions while serving as tax collector. Greenberg now is accused of sending payments to a Small Business Administration employee and submitting false claims to help two dormant companies he controlled receive more than $100,000 each in coronavirus pandemic disaster loan funds, according to the latest indictment from March 30 and made public on Wednesday.

He also faces a new wire fraud allegation, for using money from the tax collection office he ran to purchase Michael Jordan and Kobe Bryant memorabilia and to run a cryptocurrency businesses.

Fritz Scheller, Greenberg’s lawyer, said he could not comment.