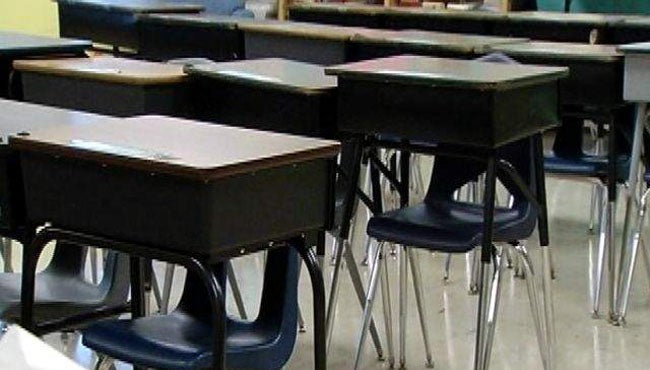 A Lincoln Public Schools spokesperson said that as of Monday morning, no one had made an official report with the district or Lincoln Police. Other reports stemming from the dance that emerged on social media over the weekend are false claims, school officials said.

The students gathered over the lunch hour across the street from the entrance to Northeast, waving signs and chanting as classmates watched from inside the building’s cafeteria.

Joined by a few parents, the students described how their peers laced water bottles with drugs, causing students to become ill at the dance on Friday night. At least one student said she was sexually assaulted by a classmate.

In a message to families on Saturday, hours after the reports first emerged on social media, Northeast Principal Keri Applebee called the claims “rumors” and said police and staff were on hand and did not witness the alleged incidents.

“We had staff positioned throughout the building, including near the restrooms. While there were a few incidents of students being hot, we did not see any students ‘passed out’ or display side effects of using narcotics during the dance,” Applebee said.

Water bottles provided by the school were sealed and claims that the dance was ended prematurely are false, LPS officials said.

“We understand these rumors can be concerning. Northeast High School and Lincoln Public Schools take student safety seriously and we have put measures in place to mitigate risks,” Applebee said. “We also ask you speak with your child about spreading misinformation and rumors.”

The school district encouraged students who are either victims or witnesses to illegal or dangerous activity to contact police or report incidents on LPS’ website.

Lily Kirk, a junior at Northeast, told the Journal Star that she started to lose consciousness at the dance, became ill and left the building. She believes her drink was spiked by classmates.

“It was a really horrible night,” said Kirk, who was not hospitalized and did not report the incident to police.

Cheri Stollar, Kirk’s mother, said her daughter was not drinking or using other substances and downplayed the idea that heat caused an adverse reaction.

Other students at Monday’s protests and on social media made similar claims of feeling ill.

Stollar, a representative of the advocacy group Stand In For Nebraska, believes the protest is an outgrowth of the demonstrations last month following an alleged sexual assault at a University of Nebraska-Lincoln fraternity.

Stollar and her daughter were both involved in those protests, too.

“They’re here not only trying to stand up for themselves, but for each other,” Stollar said. “All they’re asking is to feel safe at their school.”