The joy of celebrating a rover landing on Mars 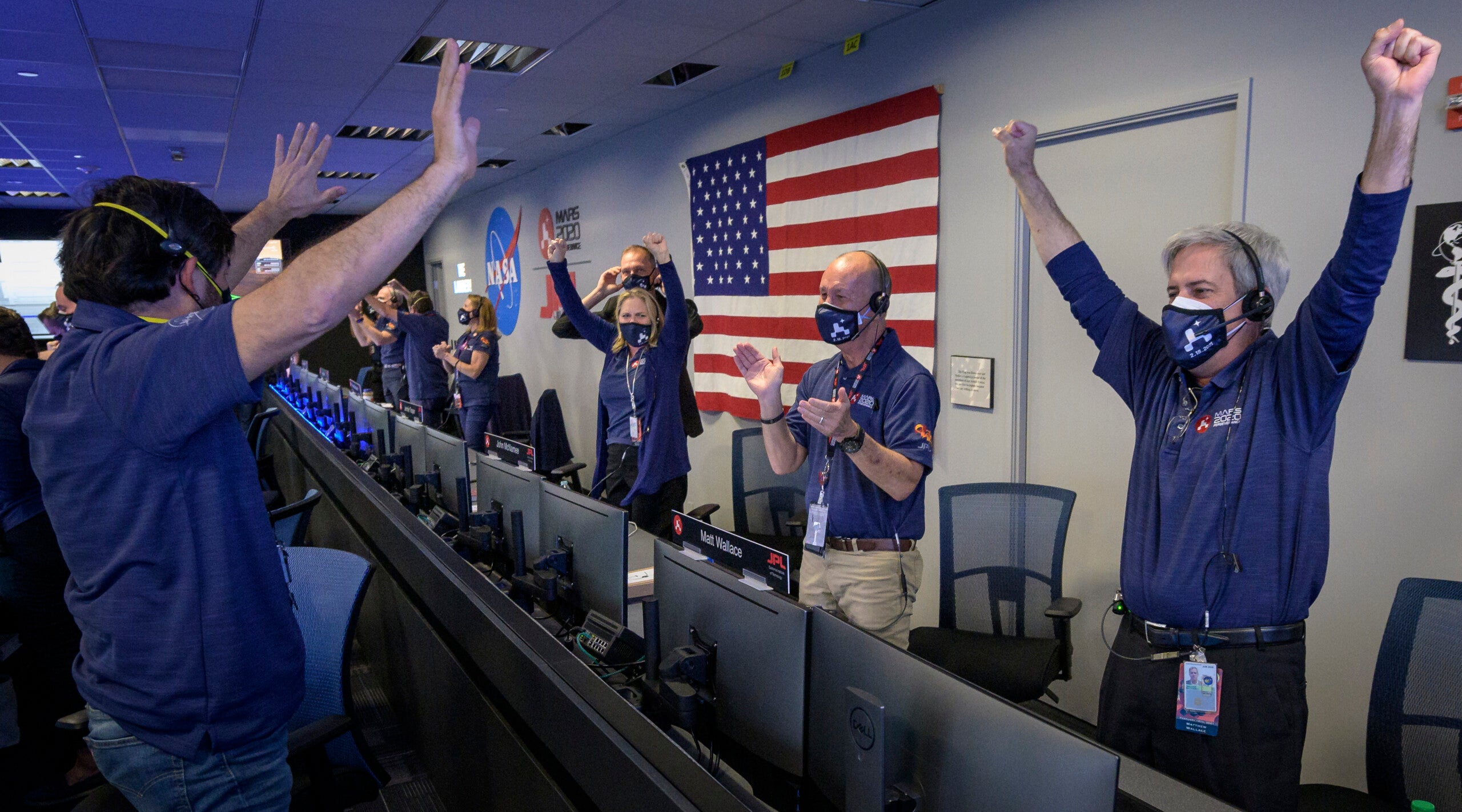 Members of NASA’s Perseverance rover team react in mission control after receiving confirmation the spacecraft successfully touched down on Mars, Thursday, Feb. 18, 2021, at NASA's Jet Propulsion Laboratory in Pasadena, California. A key objective for Perseverance’s mission on Mars is astrobiology, including the search for signs of ancient microbial life. The rover will characterize the planet’s geology and past climate, pave the way for human exploration of the Red Planet, and be the first mission to collect and cache Martian rock and regolith. Photo Credit: (NASA/Bill Ingalls)
by: By Ashley Strickland, CNN
Posted: Feb 19, 2021 / 01:24 PM EST / Updated: Feb 19, 2021 / 01:24 PM EST

(CNN) — We needed this moment.

It’s a sentiment that’s continued to echo since the world watched NASA land the Perseverance rover on Mars Thursday.

Tense anticipation gave way to immense relief at the words of Swati Mohan, Guidance, Navigation and Controls Operations Lead for the Perseverance mission.

“Touchdown confirmed. Perseverance is safely on the surface of Mars, ready to begin seeking the signs of past life.”

Pure joy poured out of mission control at NASA’s Jet Propulsion Laboratory as the rover’s team jumped out of their chairs and erupted into cheers and applause.

It’s a moment to be preserved and played on infinite loop — those seconds where anxiety dissipates in the face of hope and possibility coming together.

In that beautiful airborne moment, it didn’t matter that so many of us were watching from the places where we’ve quarantined for almost a year. As humans, we were together, united in joy. We leaped, laughed and cried with them, full of effervescence.

They did it. We did it. In a year of seemingly endless bad news — and even more as the pandemic continues and winter storms impact much of the country — something wonderful was achieved.

President Joe Biden, First Lady Jill Biden and Vice President Kamala Harris all shared their joy and congratulations on social media about the success of the landing.

Even Ringo Starr felt compelled to share in the joy and tweeted his congratulations to NASA, as well as the observation, “David Bowie will be pleased peace and love.”

Almost instantly after landing was confirmed, Perseverance sent a message: Images of her landing site, confirming the safe end of her long journey.

A mission of firsts

Mohan’s words, the ones we all needed to hear, came not only after enduring the “7 minutes of terror” as Perseverance hurtled down through the Martian atmosphere — but nearly 10 years of planning, hard work and beating the odds.

The thousands of people who worked to bring Perseverance to life lived up to the mission’s namesake most when they had to prepare the rover for a July 2020 launch during a pandemic. Then, there was the agonizing wait for her to safely land on the Martian surface.

Perseverance had to land in the most dangerous site on Mars ever attempted. A graphic shows her landing site, wreathed in red — which would have meant certain “death” if she landed on those boulders or cliffs. But in flawless fashion, due to the tireless work of many, she landed in a safe blue dot.

If you felt shaky watching the tense faces in mission control ahead of landing, just imagine how they felt. Some team members, like deputy project managers Jennifer Trosper and Matt Wallace, have worked on all five of NASA’s rovers. It takes a village — artists, engineers, scientists and even those working on other missions.

So much was riding on this. Perseverance isn’t just another rover — there’s no such thing. It takes years of work, planning, coordination and innovation to design and build an SUV-size robotic explorer that will autonomously land and drive on another planet.

She carries technological advancements that could pave the way for a human mission to Mars, such as the MOXIE instrument that will convert carbon dioxide into oxygen.

And her cameras and microphones will provide unprecedented views, as well as the sounds of Mars for the first time. Did we mention there’s also Ingenuity, the first helicopter that will fly on another planet?

It borrows from a Theodore Roosevelt quote: “Far better it is to dare mighty things, to win glorious triumphs, even though checkered by failure, than to take rank with those poor spirits who neither enjoy much nor suffer much, because they live in the gray twilight that knows neither victory nor defeat.”

Why care about a robot?

The Curiosity and Perseverance rovers on Mars aren’t “Wall-E” — we know that. Yet the idea that robotic explorers are venturing across the surface of another planet on behalf of humanity is still overwhelmingly impressive — even though NASA has been landing rovers on Mars since the Sojourner experiment in 1997.

And we can’t help but project personalities on these rovers — especially when they have charming social media accounts run by some clever NASA folks.

On Twitter, Perseverance’s hobbies are listed as: “Photography, collecting rocks, off-roading.” Shortly after landing, Perseverance tweeted, “I’m safe on Mars. Perseverance will get you anywhere.”

The Curiosity rover account replied, “Bots before boots. So proud of you, @NASAPersevere, and the work you will do paving the way for future astronauts, and searching Mars for signs of ancient life.”

Why should we care about a robot, at the end of the day?

For one thing, they’re essentially part of us, an extension of Earth now sitting on Mars. Nearly 11 million people submitted their names to hitch a ride with Perseverance on silicon chips.

“There is something special about the first few days, because we have just landed a representative of the planet Earth on a place on Mars that no one has ever been to,” said Mike Watkins, JPL director, after the Thursday landing.

For me, it’s become a very personal thing. Following the journey of this rover from concept to amazing reality has been an inspiring one.

Along the way, I’ve met so many of the people who have dedicated years of their lives this mission. It’s impossible not to feel caught up in their motivations, hopes and passion to explore.

Together, against so many challenges, they have created a technological marvel with a fitting name: Perseverance. Her search for evidence of ancient life on Mars could help answer that fundamental question at the core of humanity: Did life ever exist on another planet?

Seeing Perseverance during a visit to JPL in the summer of 2019 was a powerful moment. I was struck by the fact that this machine, just one room away from me, would be landing on another planet.

Throughout her journey, there have been so many moments of wonder. It’s impossible not to feel some inexplicable bond to this 6-wheeled robot. That will only deepen as Perseverance explores Mars.

The tire tracks rovers leave on the surface of Mars could one day have human footsteps next to them. Robots go there first, so that we may follow next. Helicopters like Ingenuity could even act as scouts for both human and robotic explorers.

Mars is an enduring point of fascination for us as humans for a multitude of reasons, said acting NASA administrator Steve Jurczyk.

“Mars is the most Earth-like planet in our solar system,” he said. It’s also more accessible than other planets, and given that Mars was likely habitable billions of years ago, it’s definitely worth exploring for past signs of life.

Perseverance is just the first of a multi-tiered effort made possible by international collaboration and future missions that will return samples collected by Perseverance on Mars to Earth.

“Percy” has already inspired students like eighth grader Alexander Mather, who named her. High school student Vaneeza Rupani named the Ingenuity helicopter that was up tucked under the rover during the journey to Mars.

Students who watched the historic landing could one day be the scientists analyzing those coveted samples or working on future missions to Mars.

“It involves many other nations as well, and leaders. Many of them are still in school, or even in kindergarten or younger, and those leaders we’re going to need as we achieve those amazing goals.”