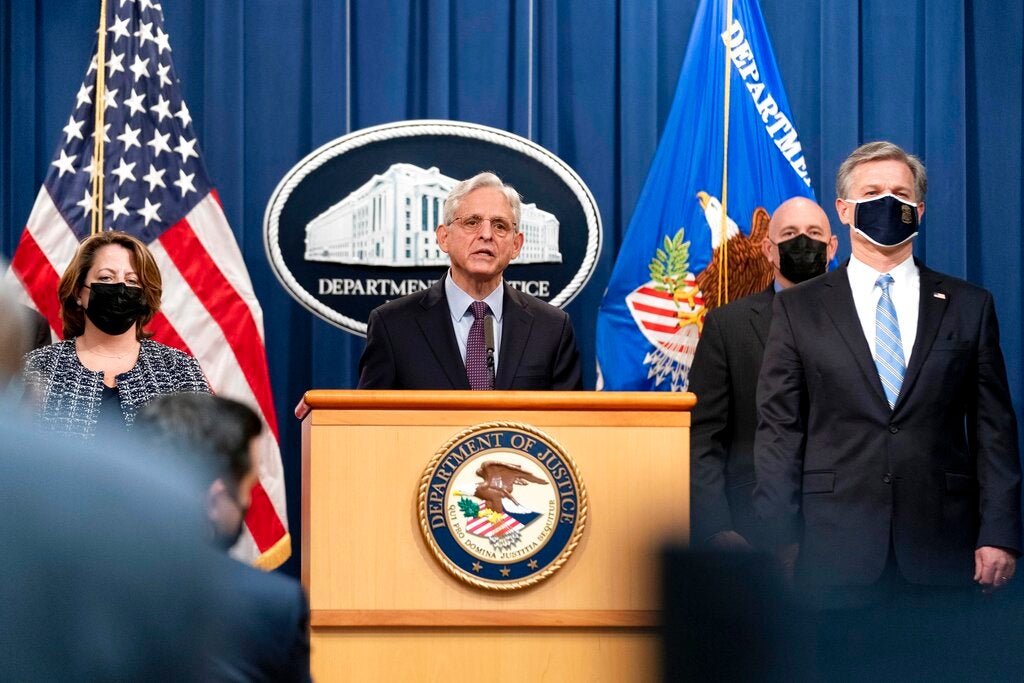 WASHINGTON (AP) — Two suspected criminal hackers have been charged in the United States in connection with a wave of ransomware attacks, including one that led to the temporary shutdown of the world’s largest meat processor and another that snarled businesses around the globe on the Fourth of July weekend, U.S. officials said Monday.

Attorney General Merrick Garland and other top officials announced charges against Ukrainian Yaroslav Vasinskyi and Russian Yevgeniy Polyanin, alleging them to be part of the REvil ransomware gang. Officials said Vasinskyi was recently arrested in Poland and that the U.S. government had recovered $6.1 million in ill-gotten funds from Polyanin.

“The Justice Department is sparing no resource to identify and bring to justice anyone, anywhere who targets the United States with a ransomware attack,” Garland said.

The Treasury Department also announced sanctions against the pair as well in what it said was a virtual currency exchange, Chatex, the department said was used by ransomware gangs.

The arrests were part of a law enforcement investigation called GoldDust that involved the United States and 16 other countries. REvil, also known as Sodinokibi, has been linked in recent months to ransomware targeting the world’s largest meat processor, JBS SA, as well as a Fourth of July weekend attack that snarled businesses around the world through a breach of a Florida-based software company called Kaseya.

Deputy Attorney General Lisa Monaco appeared to foreshadow Monday’s announcement in an interview with The Associated Press last week, saying that “in the days and weeks to come, you’re going to see more arrests” as well as seizures of ransomware proceeds.

The Justice Department has tried multiple ways to address a ransomware wave that it regards as a national security and economic threat. Arrests of foreign hackers are significant for the Justice Department since many of them operate in the refuge of countries that do not extradite their own citizens to the U.S. for prosecution.

The Justice Department in June seized $2.3 million in cryptocurrency from a payment made by Colonial Pipeline following a ransomware attack that caused the company to temporarily halt operations, creating fuel shortages in parts of the country.