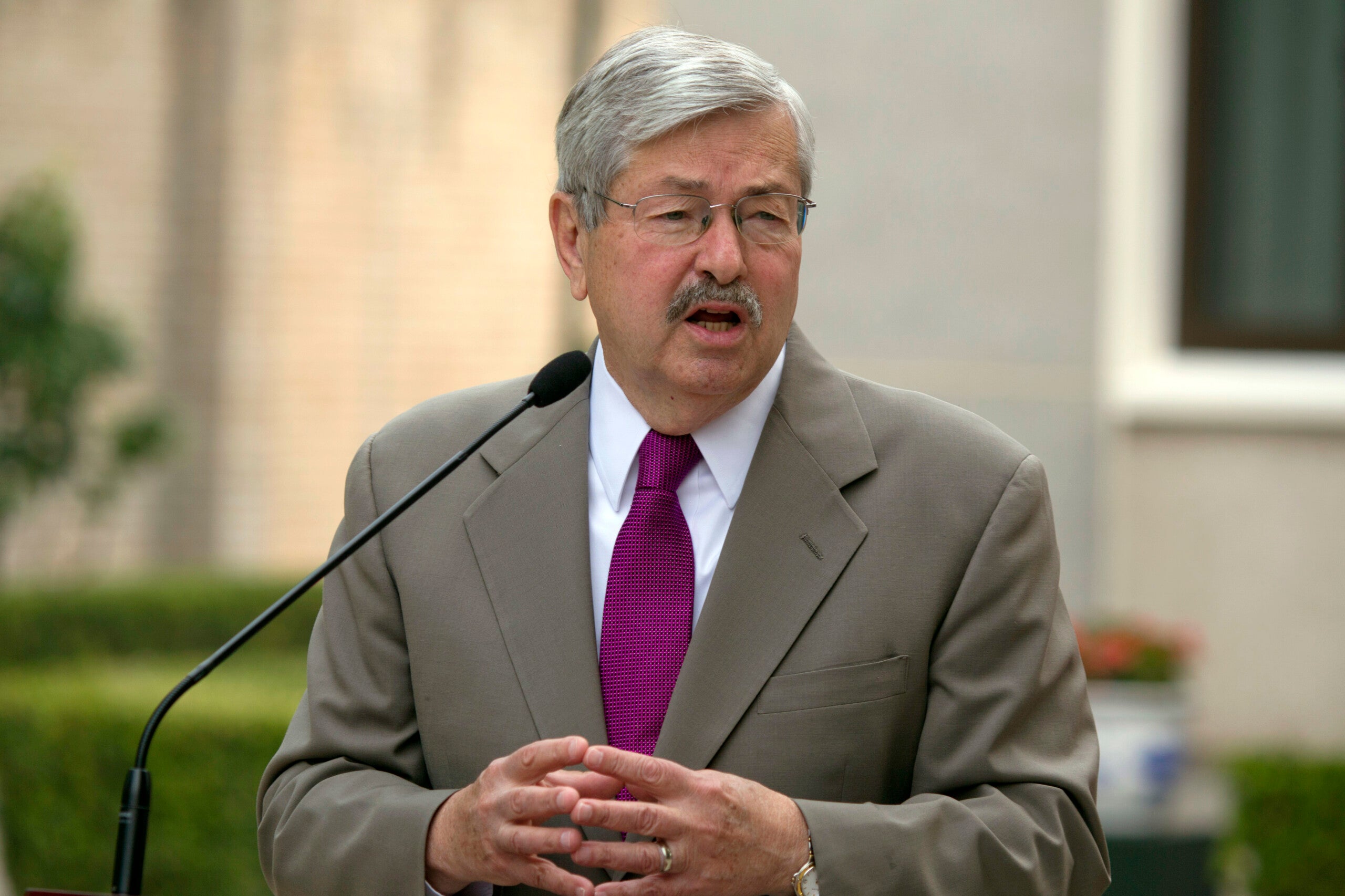 FILE - In this June 28, 2017, file photo, U.S. Ambassador to China Terry Branstad makes comments about pro-democracy activist and Nobel Laureate Liu Xiaobo during a photocall and remarks to journalists at the Ambassador's residence in Beijing. Branstad appears to be leaving his post, based on tweets by Secretary of State Mike Pompeo. Pompeo thanked Branstad for more than three years of service on Twitter on Monday, Sept. 14, 2020. (AP Photo/Ng Han Guan, File)
by: David Culver and Ben Westcott, CNN
Posted: Sep 14, 2020 / 05:40 AM EST / Updated: Sep 14, 2020 / 05:40 AM EST

(CNN) — Terry Branstad will be stepping down as United States Ambassador to China after more than three years in Beijing, a source confirmed to CNN Monday.

Branstad is expected to leave Beijing before the November US Presidential election, the source said.

The announcement comes amid increasing tensions between the US and China on several fronts. The Chinese government announced on Friday it would be imposing unspecified restrictions on senior US diplomats and personnel inside China after Washington put in place a similar measure targeting Beijing’s diplomatic corps on September 3.

In a Twitter post early Monday, US Secretary of State Mike Pompeo thanked Branstad for his service to the American people as the US Ambassador.

“President (Donald Trump) chose Ambassador Branstad because his decades-long experience dealing with China made him the best person to represent the Administration and to defend American interests and ideals in this important relationship,” Pompeo said.

Pompeo didn’t give a reason for Branstad’s departure, or any announcement about a potential successor to the important diplomatic post.

Branstad was one of then-President-elect Trump’s first ambassadorial picks in December 2016, shortly after Trump won the US Presidential election.

Trump said at the time that the then-Iowa governor was picked for his experience in public policy, trade and agriculture, as well as his “long-time relationship with (Chinese) President Xi Jinping,” whom Branstad had known since 1985 through US-China government exchanges.

During that period, the two were believed to have maintained a friendship of sorts, with Xi meeting again with Branstad during a visit to the US in 2012 while still vice-president.

Originally Branstad’s appointment was welcomed by Beijing, with Chinese Foreign Ministry spokesman Lu Kang lauding him as an “old friend of the Chinese people.”

But Branstad has overseen one of the rockiest periods of US-China relations in recent history. Since his appointment, the Trump administration has placed tariffs on hundreds of billions of dollars of Chinese goods as part of a long-running trade war. It has also banned Chinese technology firms such as Huawei from the country’s communications infrastructure and receiving US components, and tightened visa restrictions on Chinese state media journalists working in the US.

On Sept. 9, an opinion piece written by Branstad, in which he accused the Chinese government of “exploiting” US openness in recent decades, was rejected for publication by Communist Party mouthpiece People’s Daily for being “seriously inconsistent with facts.”

“If you do wish to publish this op-ed in the People’s Daily, you should make substantive revisions based on facts in the principle of equality and mutual respect,” the state media publication said in its rejection letter.

In response, Secretary of State Pompeo accused People’s Daily of “hypocrisy,” saying that if the Chinese government was a mature power, it would “respect the right for Western diplomats to speak directly to the Chinese people.”