Video: Employees get into brawl at discount store 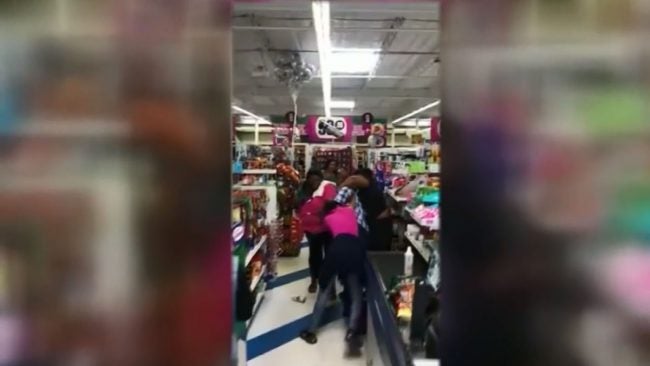 HOUSTON (WCMH) – It was a typical shopping trip at a 99-Cents Only store for one Houston family. Then, a fight between employees broke out.

“I’m shopping with my mom and my daughter at the 99-cent store, and while I’m waiting, I see two cashiers arguing with each other,” said Leonardo Balderas, who witnessed the fight.

The woman wearing the plaid shirt in the video, named Kodi, had asked her manager if she could take a break. That’s when the argument started.

That’s when the fight broke out. Balderas was shocked, but he managed to record the brawl on his cell phone.

“I see this on Facebook on Black Friday sales, you know?” he said. “Clearly I left the video on so that other store owners can see what does on when two employees have a dispute. Why not do something about it?”

A customer tried to break up the fight, but then the woman in the pink shirt grabbed a bottle and hit Kodi in the face. Another customer stepped in, with a baby in tow, and pulled the two women apart.

Kodi’s mother told KTRK that she has a learning disability, autism and schizophrenia and that the other woman in the video has bullied her in the past. Kodi reportedly told store management about the bullying, but nothing was done.

The 99-Cents Only store’s representatives have repeatedly said they have no comment on the altercation that left Kodi with a gash above her eye.

Balderas says he hopes the video he took can help change the way employee disputes are handled at other retail stores.

“They’re out there working their butt off, but when there’s a dispute and you don’t do nothing, that’s what happens,” he said. “So I want that video to be an example to other store owners.”