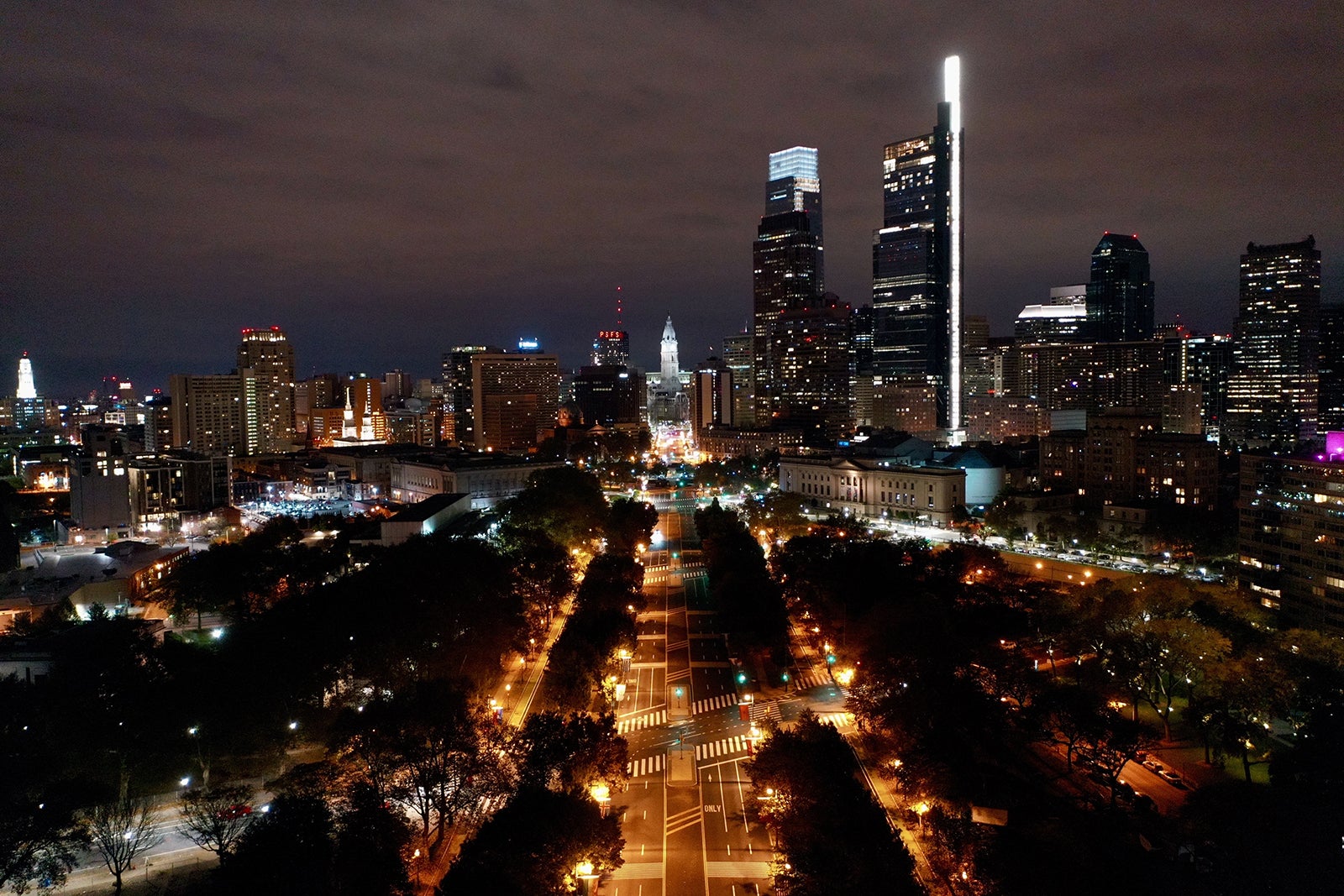 PHILADELPHIA, USA - OCTOBER 28: A drone photo shows a view from West Philadelphia, United States on October 28, 2020 after curfew comes in effect for the city, on the third night of protesting and unrest after the fatal shooting of Walter Wallace Jr. by police. Mayor Jim Kenney announced a nighttime curfew on October 28 following two nights of unrest over the latest police killing of a Black man whose family said suffered from mental health issues. Thousands of people have taken to Philadelphia's streets, with looting and violence breaking out, since police on Monday shot dead 27-year-old Walter Wallace, who Philadelphia police officers claimed was armed with a knife. (Photo by Lokman Vural Elibol/Anadolu Agency via Getty Images)
by: Madeline Holcombe, Mark Morales and Brynn Gingras, CNN
Posted: Oct 29, 2020 / 11:48 AM EST / Updated: Oct 29, 2020 / 11:49 AM EST

(CNN) — The family of Walter Wallace Jr., the Black man fatally shot by Philadelphia police this week, has reviewed all available police body camera footage and listened to available 911 audio recordings related to the incident, a source close to the family said Thursday.

The emergency calls and body camera footage will be released to the public in the next couple of days, Philadelphia Police Commissioner Danielle Outlaw said Wednesday. She will also release a history detailing previous police responses to the home, she said.

Wallace, 27, was shot and killed Monday while holding a knife during a confrontation with police in West Philadelphia. His family has said he suffered from bipolar disorder and was in crisis at the time of the shooting. A family attorney said Wallace was a mental health patient who was prescribed lithium.

The police shooting has set off unrest in the city the past few nights, with demonstrators marching in the streets and some incidents of looting, property destruction and attacks on police officers. A citywide curfew of 9 p.m. to 6 a.m. began Wednesday night and will be reevaluated daily, Mayor Jim Kenney said.

Authorities are investigating what the two responding officers, who didn’t have Tasers, knew when they answered a call about a man with a knife.

“This investigation has many moving parts and we are working hard to ensure that a fair and thorough investigation takes place,” Outlaw said.

Police said the incident started with a call about a man with a knife, KYW reported. “Responding officers witnessed a male on the block. Immediately they noticed he had a knife in his possession and he was brandishing it, and waving it erratically,” Philadelphia Police Sgt. Eric Gripp told KYW.

Shaka Johnson, an attorney for Wallace’s family, said relatives had made at least three calls to authorities that day. The initial call was for an ambulance, he said, but police arrived first.

It’s unclear how many calls police responded to on Monday. CNN reached out to police and the family attorney for clarity.

At a Tuesday news conference, police officials did not answer questions about whether officers were there earlier in the day or had previously interacted with Wallace. They did not say what officers knew of the situation prior to arrival.

Federal criminal indictments are expected to be announced Thursday “stemming from violent civil unrest in Philadelphia,” according to a tweet by the US Attorney for the Eastern District of Pennsylvania.

Protests on Tuesday began as a large, peaceful march, but turned violent when the crowd came upon a group of police officers near Philadelphia Police 18th District.

Protesters set cars and dumpsters on fire, Outlaw said, and officers were hit with bricks and “something that appeared to be blood.” Police are also investigating reports of Molotov cocktails being thrown.

Twenty-three officers were injured responding to protests and looting incidents overnight, Outlaw said. All were treated and released from local hospitals.

Outlaw said 91 people were arrested, including 11 on charges of assaulting police and 76 for burglary.

Pennsylvania National Guard members will guard businesses to prevent looting, but troops will not be deployed until later this week, officials said.

Former Philadelphia Police Commissioner Charles Ramsey told CNN’s “New Day” the case is not as clear-cut as some other police shootings because Wallace was armed.

“Well, I mean, listen, you never want deadly force to be the outcome of any encounter,” Ramsey said. “And I can see in the tape that they were backing up and so forth. At some point in time, the distance was beginning to close between themselves and the individual.”

Ramsey said the officers had seconds to make “crucial decisions.”

“This is why it’s so complicated and this is why police need the adequate tools and training, but more importantly there needs to be a beef-up of mental health services, not only in Philly, but in cities around the country so that police will not have to be dispatched,” Ramsey said.

“But having said that, I can’t think of any mental professional that would have done this without calling 911, because the person was armed,” he added.

When police arrived at the man’s house, JaHiem Simpson, who took video of the police shooting, told CNN a person who he later was told was Wallace’s mother told police that Wallace had mental health issues.

Simpson said Wallace exited the house with a knife and everybody told him to put the knife down. Simpson said he saw officers pull their guns as soon as they saw the knife.

The two officers can be seen in the video backing up as he walks towards them. Multiple shots ring out as police fire, striking him. Sgt. Gripp told KYW that an officer took Wallace in his police cruiser to Presbyterian Hospital, where he died.

“It could have been dealt with in a different way,” Wallace Sr. told CNN Tuesday night, adding he believes the officers “could have called a superior to handle the situation.”

Johnson, the attorney for the Wallace family, said that if the officers had had a less lethal option, the outcome could have been different.

“The officers did not have what they needed. There wasn’t a less-than-lethal option available. They didn’t have Tasers,” Johnson explained. “A person is in mental decline and in crisis.”

There are about 4,500 patrol officers on the Philadelphia police force and the department has 2,300 Tasers, Outlaw said in the news conference Wednesday.

The department gets $900,000 a year for the electrical weapons, enough to buy a few hundred per year, she said.

“What the conversation is today is how do we ensure that we get enough Tasers so that every officer — at least every officer that’s working in operations — has a Taser,” Outlaw said.

She said she feels the city is supportive of that goal.

“We are supportive of every officer having access to them. The issue is cost,” Kenney said. “It’s the issue of resources. We can try to find grants and other things … but we have a lot of needs and a lot less money than we used to have.”