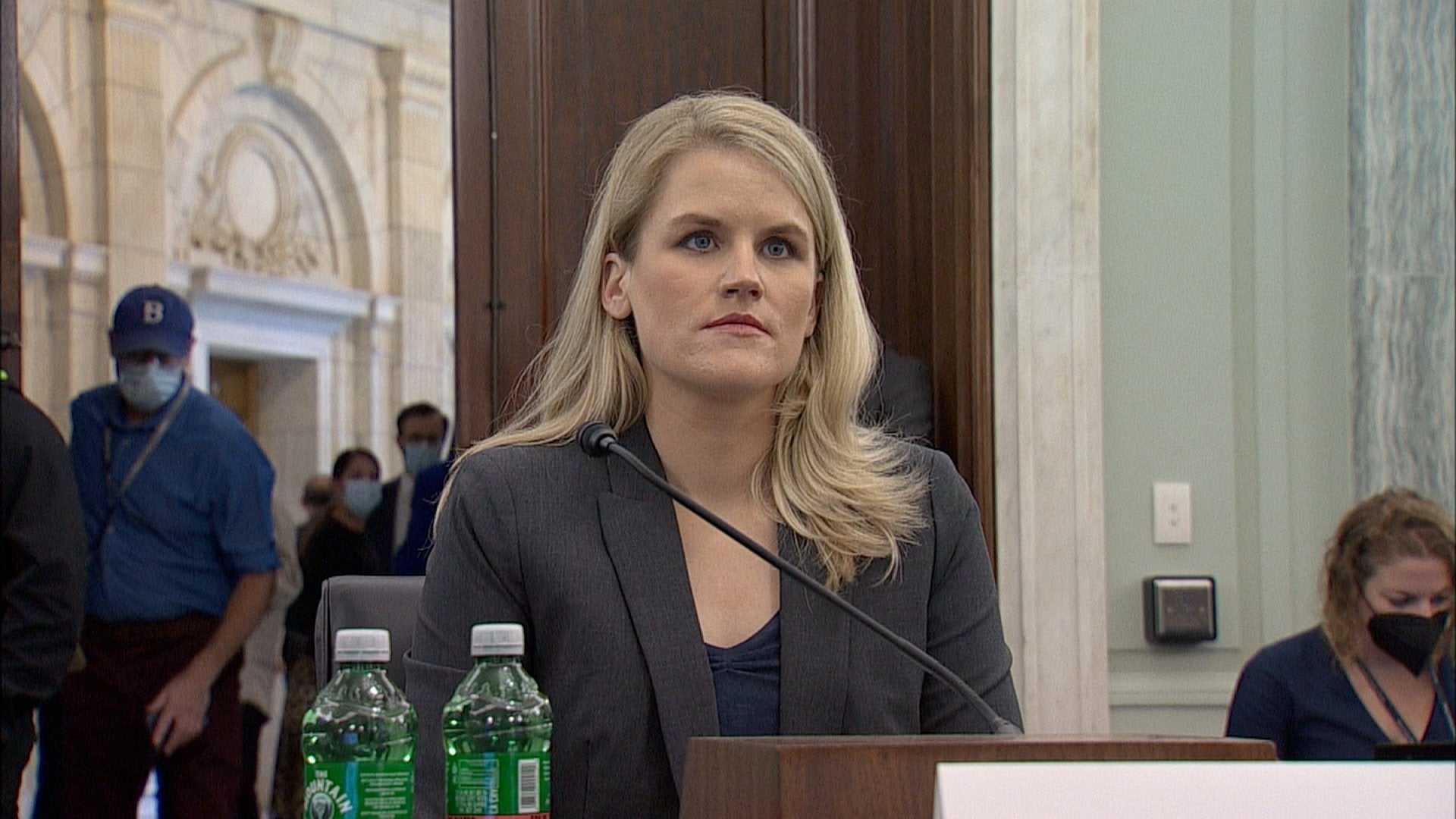 (CNN) — The former Facebook employee whose leaks triggered some of the most intense scrutiny in the company’s history revealed her identity Sunday night.

Frances Haugen, a former Facebook product manager with stints at several other big tech companies, went public with an appearance on “60 Minutes.”

Here’s what we know about her so far.

Haugen grew up attending the Iowa caucuses with her parents, according to her personal website. That experience instilled “a strong sense of pride in democracy and responsibility for civic participation,” the website added.

After studying electrical and computer engineering, followed by an MBA, Haugen worked at several tech firms starting in 2006, including Google, Pinterest and Yelp. She specializes in “algorithmic product management,” and has worked on several ranking algorithms similar to the one Facebook uses to organize its main newsfeed, according to her prepared testimony obtained by CNN on Monday. She is scheduled to appear Tuesday before the Senate subcommittee on Consumer Protection, Product Safety, and Data Security.

“Working at four major tech companies that operate different types of social networks, I have been able to compare and contrast how each company approaches and deals with different challenges,” she wrote in her prepared testimony.

Haugen, 37, joined Facebook in 2019 to work on civic integrity, including “issues related to democracy and misinformation,” according to her website. Those issues have been front and center for critics of Facebook and other social media companies, particularly around the coronavirus pandemic and the 2020 US Presidential Election.

Haugen took the job at Facebook to work on addressing misinformation, she said in her “60 Minutes” interview. But she said her feelings about the company started to change when it decided to dissolve its civic integrity team shortly after the election.

She suggested that this decision, in part, allowed the platform to be used to help organize the January 6 riot on Capitol Hill.

Facebook says the civic integrity team’s work was distributed to other units when it was dissolved, and the company’s executives have pushed back against accusations it was responsible for the Capitol Hill riot.

Haugen’s revelations are also important because they come as lawmakers, regulators and activists around the world have repeatedly slammed the company for not doing enough to protect its hundreds of millions of users.

“I joined Facebook … because someone close to me was radicalized online,” she said in her comments to the Senate subcommittee. “I felt compelled to take an active role in creating a better, less toxic Facebook.”

But over the better part of two years, she said she began to feel that Facebook wasn’t as committed to ensuring its products furthered the public good.

In her statement to the Senate subcommittee on Tuesday, Haugen slammed Facebook’s creation of a “system that amplifies division, extremism, and polarization” around the world.

“Facebook became a $1 trillion company by paying for its profits with our safety, including the safety of our children,” she wrote. “And that is unacceptable.”

About a month ago, Haugen filed at least eight complaints with the Securities and Exchange Commission alleging that the company is hiding research about its shortcomings from investors and the public.

Haugen also shared the documents with the Wall Street Journal, which published a multi-part investigation showing that Facebook was aware of problems with its apps, including the negative effects of misinformation and the harm caused, especially to young girls, by Instagram.

“Every day our teams have to balance protecting the ability of billions of people to express themselves openly with the need to keep our platform a safe and positive place,” Facebook spokesperson Lena Pietsch said in a statement to CNN Business following Sunday’s “60 Minutes” interview. “We continue to make significant improvements to tackle the spread of misinformation and harmful content. To suggest we encourage bad content and do nothing is just not true.”

Haugen resigned from Facebook in April this year and left the company in May after handing off some projects, according to a profile in the Journal, but not before collecting the documents that would form the basis for the publication’s investigation.

“If people just hate Facebook more because of what I’ve done, then I’ve failed,” she told the Journal. “I believe in truth and reconciliation — we need to admit reality. The first step of that is documentation.”

On Tuesday, Haugen will testify in front of the Senate subcommittee chaired by Democratic Senator Richard Blumenthal.

The subcomittee last week questioned Facebook’s global head of safety, Antigone Davis, about the impact its apps have on younger users. Davis sought to paint the company’s services, particularly Instagram, as more helpful than harmful to teenagers.

“Now that doesn’t mean that the ones that aren’t [finding it helpful] aren’t important to us. In fact, that’s why we do this research,” she said.

Those lawmakers will now hear from Haugen firsthand and have the opportunity to question her about what she experienced inside Facebook.

The company has strongly pushed back against its former employee’s claims, including a more than 700-word statement late Sunday laying out what it called “missing facts” from the “60 Minutes” segment and saying the interview “used select company materials to tell a misleading story about the research we do to improve our products.”

But her revelations appear likely to cause more than just a ripple for Facebook. The company has faced scrutiny from regulators and governments around the world for years, and the pressure on it continues to mount with each week.

Even as it dealt with the continued fallout from Haugen’s revelations as well as a widespread outage of its main services for several hours on Monday, Facebook sought to dismiss an antitrust complaint by the Federal Trade Commission accusing it of being a monopoly.

Haugen says the only way to hold Facebook accountable is to reveal its inner workings in the way she did.

“I came forward because I recognized a frightening truth: almost no one outside of Facebook knows what happens inside Facebook,” she wrote to the Senate committee on Monday. “As long as Facebook is operating in the dark, it is accountable to no one. And it will continue to make choices that go against the common good.”