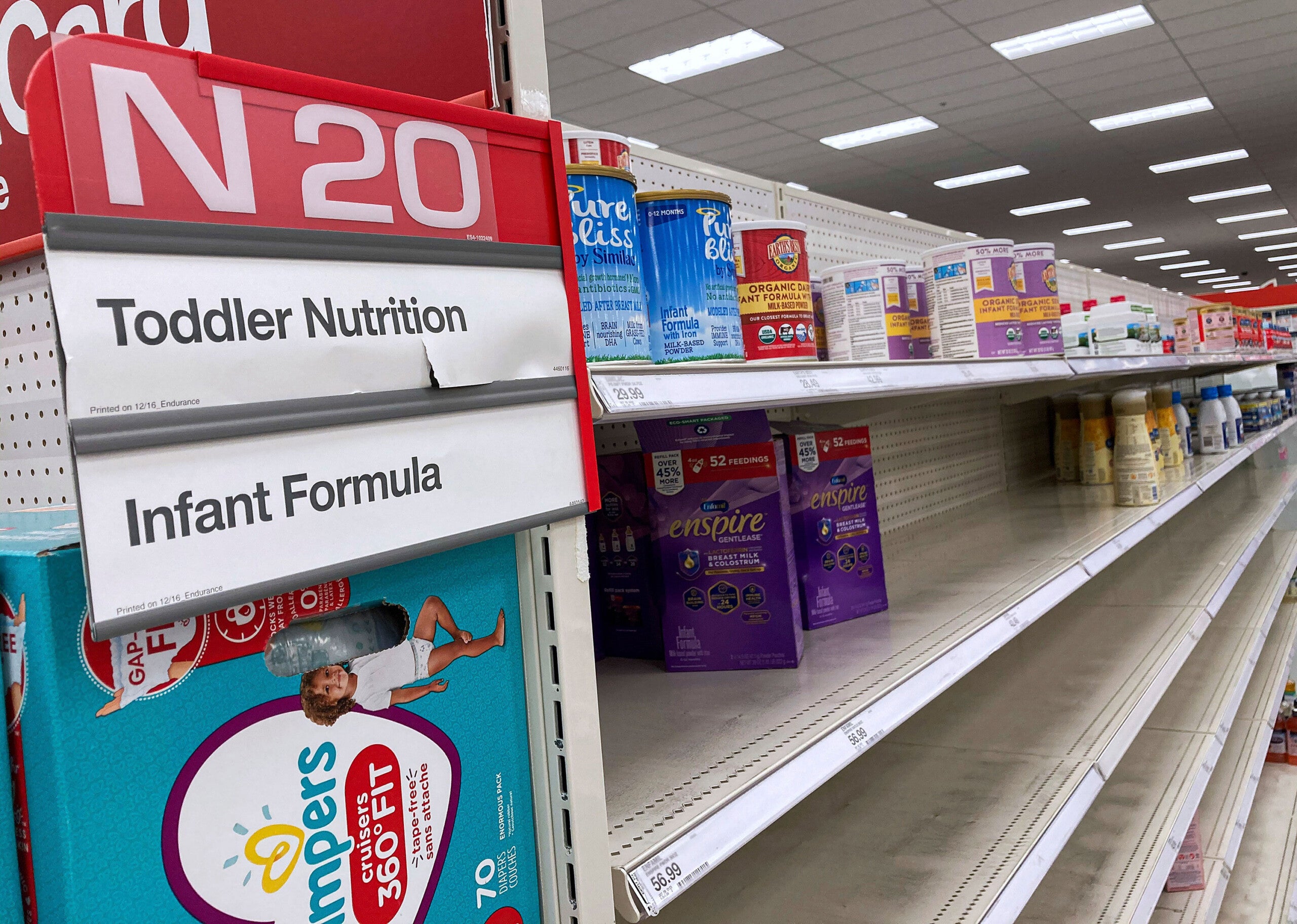 A nearly empty baby formula display shelf is seen at a Target store in Orlando. Stores across the United States have been struggling to stock enough baby formula, causing some chains to limit customer purchases. While manufacturers report that they are producing at full capacity, it's still not sufficient to meet the current demand, which has been aggravated by product recalls. (Photo by Paul Hennessy / SOPA Images/Sipa USA)(Sipa via AP Images)
by: MJ Lee and Maegan Vazquez, CNN
Posted: May 13, 2022 / 03:35 PM EST / Updated: May 13, 2022 / 03:35 PM EST

Virginia Democratic Rep. Abigail Spanberger told CNN Friday morning that she spoke with Klain twice in the last two days to discuss the shortage, saying that Klain told her the White House views using the law as potentially a “really important step.” The possibility of deploying the Defense Production Act — which allows the government more control during emergencies to direct industrial production — to address the formula issue was one of the many things they discussed, Spanberger said.

“I think the White House absolutely understands the severity and the urgency of the issue,” Spanberger said. “But until there’s more food on the shelves, I am not satisfied.”

Spanberger said that she and Klain also discussed the fact that invoking the law may provide a longer term solution, but would not be the quickest way to get baby formula back on shelves.

“We talked through the fact that the DPA, while potentially a really important thing for them to consider,” Spanberger said, “may not be as fast as just loading up planes and ensuring that baby food from the Netherlands or other European partners can get here quickly.”

“I think the White House absolutely understands the severity and the urgency of the issue,” Spanberger added. “But until there’s more food on the shelves, I am not satisfied.”

“So, right now of course we’re keeping that option under consideration, but our focus primarily is on twofold: One is increasing supply, and the other is making it readily available,” Psaki told reporters in the White House press briefing.

Efforts to address the shortage come as American stores have had a hard time keeping baby formula in stock for months due to a recall, inflation and supply chain problems. Manufacturers have said they are producing at full capacity, but it’s not enough to keep up with current demand.

US grocery store shelves had even less infant formula last week than they had the week before, according to a new report from Datasembly, a real-time data tracking agency that gauges how much product is available.

The White House on Thursday unveiled a series of limited steps to address the shortage, including importing more formula from overseas, urging states to allow government nutritional assistance recipients more flexibility in the varieties of infant formula they can buy and calling on the Federal Trade Commission and states attorneys general to crack down on price gouging by manufacturers.

After Psaki on Thursday struggled to answer what the administration’s guidance is for a concerned parent who cannot find formula to feed their baby, she announced Friday that the US Department of Health and Human Services has launched a new website to assist parents searching for infant formula amid national supply shortages.

Individuals can visit HHS.gov/formula, which Psaki said will provide “resources and places that parents can go to obtain formula, including contacts with companies, food banks (and) health care providers.”

Psaki seemed to suggest that the website was created over the last 24 hours amid growing concerns.

“We wanted to make (information) readily available and accessible to people. But prior to that period of time, we had not seen, obviously, what we’ve seen over the last few days,” Psaki added.

She also told reporters that a national baby formula stockpile is not under consideration by the administration as a step to prevent a similar crisis in the future.

Administration officials have noted that production has increased since the massive February recall of formula produced by Abbott Nutrition exacerbated the current problem.

On Friday, a White House spokesperson said Abbott committed to providing critical flexibility to states through the end of August in response to a letter sent by Agricultural Secretary Tom Vilsack.

“This means that families on (Special Supplemental Nutrition Program for Women, Infants, and Children, or WIC) can purchase any available product in the months to come, and states and retailers can plan ahead as they work to keep their stocks shelved, and most importantly provide certainty for families,” the spokesperson said.

Though they’ve expressed optimism about increased production levels, Biden officials have repeatedly declined in recent days to predict when store shelves will return to normal.

On Friday, Kate Bedingfield, the White House communications director, told CNN’s Kate Bolduan that she could not indicate when the shortage will end.

“I’m not going to stand here and tell your audience that I can give you a hard timeline that I can’t give you,” she told Bolduan when pressed several times on when parents can expect a return to more formula on store shelves. “We are being candid about moving as quickly as possible. And we are relentlessly focused on this.”

Bedingfield also refused to call the shortage a crisis.

“Well, I don’t think it’s about a label. I think it’s about addressing directly the need that families all across the country have,” she said. “Listen, I’m a mom. I have two young kids. I’m not terribly far removed from the days of feeding my kids with formula. I know … and the President knows how stressful this is for families across the country.”

Later Friday, Food and Drug Administration Commissioner Dr. Robert Califf tweeted that the FDA is “working around the clock” to get more formula to shelves and will announce plans next week to streamline formula imports.

Though the commissioner didn’t indicate exactly when formula stock would return to normal, he wrote that the new and ongoing steps “will help dramatically improve the supply in the U.S. in a matter of weeks.”

Califf also said that the FDA is continuing to work with existing manufacturers to increase production. FDA data, he said, “indicates that in stock rates in retail stores are stabilizing but we continue to work around the clock to further increase availability.”

House Speaker Nancy Pelosi on Friday outlined the House’s plans next week to deal with the shortage.

In a letter to fellow House members, she wrote that the House “will bring up on suspension a bill to grant emergency authority to the WIC program to address supply chain disruptions and recalls.” The House Appropriations Committee, she said, will “bring to the Floor an Emergency Supplemental Appropriation to immediately address the infant formula shortage.”

At least three House committees have announced this week they are looking into the issue.

A spokesperson told CNN that the House Committee on Oversight and Reform on Friday morning sent letters to four separate companies that produce baby formula requesting information about the supply chain issues.

A House Energy and Commerce Committee spokesperson announced a hearing on baby formula for May 25 and told CNN they plan to call representatives from the FDA and Abbott, a major baby formula producer, to testify.

And the appropriations committee will also hold two hearings related to the shortages, including one next week with Califf on the FDA’s 2023 budget request and oversight of infant formula.

The committee’s chairwoman, Connecticut Democratic Rep. Rosa DeLauro, told CNN she believes the FDA “dragged their feet” in addressing problems with Abbott Nutrition but that she doesn’t blame the Biden administration for the shortage.

“Abbott Nutrition has been a bad actor, produced a contaminated product,” she said. “They had a whistleblower’s report that went to the FDA in October. (The whistleblower) was not interviewed until December and then the recall happened in February.”

Senate Health, Education, Labor and Pensions Committee Chair Patty Murray, Pennsylvania Democratic Sen. Bob Casey and 30 Senate Democrats sent a letter to the president of the Infant Nutrition Council of America “calling on infant formula manufacturers to make every effort possible to get parents and families the formula they need to feed their kids.”

This story has been updated with additional developments on Friday.