Young hunter gets one of a kind experience with first hunt 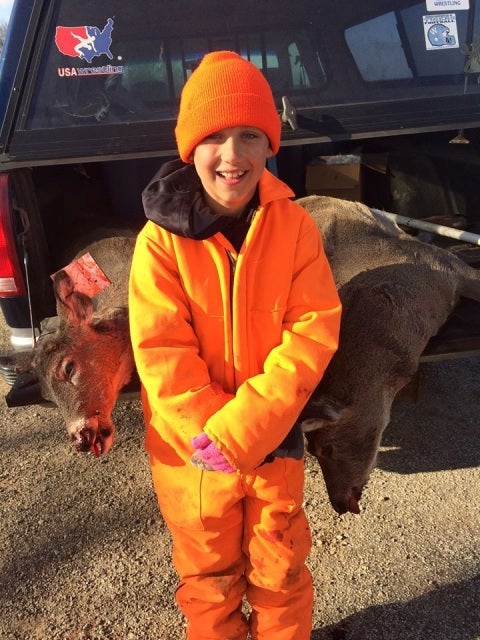 GREEN BAY, Wisc. (WBAY) – Every hunter remembers the first buck the shot and the story of how they got it. But one area 10-year-old may have one of the rarest experiences reported over the years.

“I wanted to go hunting this year because I really wanted a deer,” said 10-year-old Kyler Verbeten.

Kyler went out hunting Sunday with his dad, with his gun for the first time.

“This squirrel kept distracting me, so I kept watching the squirrel,” said Kyler. “The squirrel was just jumping from tree to tree, everything. It was just doing weird stuff.”

Kyler and his dad eventually saw two deer in the woods.

“I said, shoot the big doe, because there was a smaller one,” said Matt Verbeten, Kyler’s dad. “He had the gun, and I’m kind of laughing, we’ll see how he does, he’s 10…”

“I said, ‘Shoot again,’ he puts it back up, BOOM. They just fell right over,” said Matt.

“I was so excited I almost jumped out of the stand,” said Kyler, “I just ran down the ladder and ran out there to look at them.”

Kyler’s dad helped him gut and drag the deer, and used his own tag, along with Kyler’s, since they weren’t planning on Kyler shooting two deer.

His dad says besides a one-of-a-kind first experience, he hopes Kyler takes away a lesson from the woods.

“Just for kids nowadays to get the value of nature, to get outside and do something,” said Matt. “There’s not an app for something like that.”

Kyler says he’ll sit with his dad and his brothers the rest of the season, and will definitely be back for more next year.

“Are you going to get three with one shot next year?” we asked Kyler.