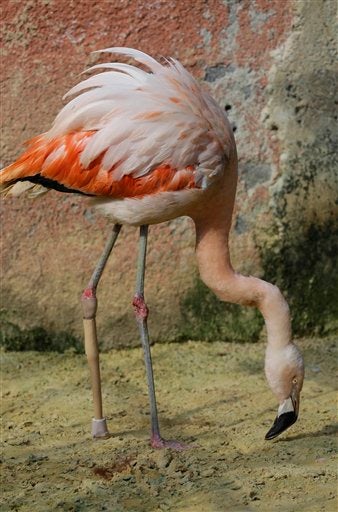 SOROCABA, Brazil (AP) – A pink flamingo in Brazil has gotten a new leg to stand on – an artificial one.

Zookeepers at a zoo in southeastern Brazil said this week they think it’s the first time a flamingo has used a prosthetic leg.

The 6-year-old Chilean flamingo at the Sorocaba zoo fractured his left leg a month ago.

“To prevent an infection from setting in and spreading to the rest of his body, which would have killed him, we decided to amputate the leg and give him the prosthesis,” said the zoo’s veterinarian, Andre Costa, who performed the surgery on the bird.

Costa said it’s unknown how bird’s leg was injured, but that “perhaps one the clumsy pelicans that share the enclosure crashed into him or he was attacked by one of the crowned cranes, who are very aggressive and territorial.”

Whatever the cause, it was clear the bird would have little chance of survival with just one leg, so the zoo decided to give the artificial leg a try.

The 7-inch carbon limb was donated by a local prosthesis manufacturer.

Within days the flamingo was adjusting nicely to his new leg – even tucking it under his body to make the flamingo’s classic one-leg standing pose.

Costa said the bird remains apart from the other 28 flamingos kept at the zoo and will only be gradually reintroduced to the flock.

“The other birds might see the prosthesis as an object to be attacked, not as a leg,” he said. “They may shun or attack, and even kill him.”