No. 22 Creighton uses hot shooting to run past No. 16 Butler 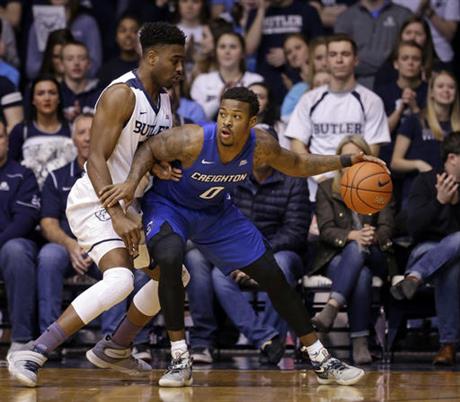 Justin Patton, Marcus Foster and Khyri Thomas all scored 15 points Tuesday night and No. 22 Creighton regained its 3-point shooting touch as it ran away from No. 16 Butler, 76-67.

“This is a huge win for us given the events of the past couple of weeks,” McDermott said. “We’re still trying to find ourselves in some regards, so to come in here and get this victory is a real shot in the arm.”

But after losing three of their previous four and sliding from the top 10 almost out of the Top 25, Creighton has reverted to its early season form.

It has won two straight and moved into second place in the conference standings after going 13 of 21 from 3-point range, a season-high 61.9 percent.

They were 55.8 percent from the field, limited the usually high-scoring Bulldogs to just 40.0 percent and allowed only 2 3s in the second half.

“We were never going to fold, we never doubted ourselves,” Patton said after scoring 12 points in the second half. “We just had to learn everything all over again and it looks pretty good right now, if I do say so myself.”

After losing the first meeting and playing catch-up most of the first half Tuesday, Butler scored the first five points of the second half to take a 38-37 lead.

Then Creighton went on a 17-4 run to take a 54-42 lead with 14:05 left. After the Bulldogs cut the deficit to five, the Bluejays quickly extended the margin to double digits and Butler couldn’t get closer than seven the rest of the night.

Kamar Baldwin scored 14 points and Kelan Martin added 11 for the Bulldogs (18-5, 7-4), not nearly enough to avoid their first back-to-back losses of the season.

Creighton: After experimenting with lineups and combinations, McDermott and the Bluejays seem to have rebounded. They have their second sweep of Butler in three seasons and some momentum heading into the weekend.

Butler: A week ago, the Bulldogs looked like they were on the verge of cracking the top 10. Now, they are in a funk – largely because of poor defense. Expect Holtmann to spend most of his time over the next week looking for solutions.

Traditionally, Butler has ranked among the national leaders in scoring defense. Not lately.

This was not just another win for the Bluejays.

Creighton improved to 4-1 against the Top 25 this season and 5-69 all-time in true road games against ranked teams. The Bluejays finished January with their third win of the month over a ranked opponent, their third straight win over a Top 25 foe and their first season sweep of Top 25 team – all school firsts.

Butler: After a weeklong break, the Bulldogs return to action Feb. 7 at Marquette.