No. 23 Hoosiers ride hot shooters past No. 13 Maryland 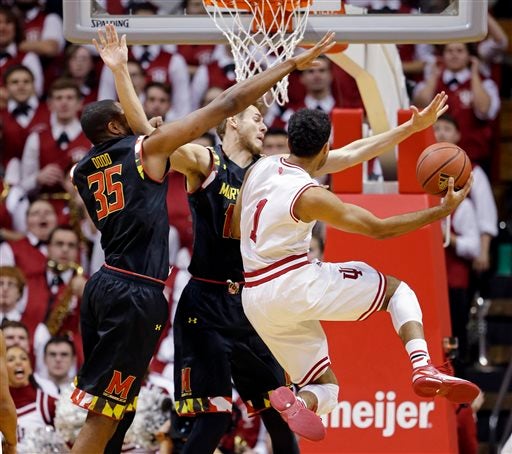 The Hoosiers (15-4, 5-1 Big Ten) have won four straight and are tied with No. 6 Wisconsin for the conference lead.

Jake Layman had 13 points and Jared Nickens finished with 12 for Maryland (17-3, 5-2), which was off all night. The defense was shredded for a season-high point total and the league’s best 3-point defense allowed Indiana to make 15 3s.

Hartman got Indiana started by scoring seven points in the opening 12-3 flurry, which erased Maryland’s only lead of the game.

The Terrapins spent the rest of the night playing catch-up and finally tied the score at 26.

Indiana regained control with a 7-0 run and gradually extended the lead in the second half. Maryland couldn’t get closer than eight over the final 18½ minutes.

For Indiana, upsets are becoming the norm. The Hoosiers have beaten a league-high 19 wins over ranked teams since 2011-12 including four this season – SMU, Butler, Ohio State and Maryland.

And Thursday night’s was the most impressive of all.

Maryland stayed close through the first half, but couldn’t keep up with Indiana’s shooters in the second half.

Terrapins: The vaunted defense was missing Thursday. Coming into the game, opponents were shooting just 37.7 percent from the field and 27.9 percent on 3-pointers. But the Hoosiers made 60 percent of their shots from the field and were 15 of 22 on 3s, falling two makes short of tying the school record for a single game.

Hoosiers: Hartman has done a terrific job filling in since Hanner Mosquera-Perea went down with an injured right knee. But he was at his best Thursday. Hartman was 3 for 3 of 3 from the field in the first half – all 3-pointers. He opened the second half with two blocks, finishing 4 of 4 from the field, 4 of 5 on free throws with four rebounds and three blocks.