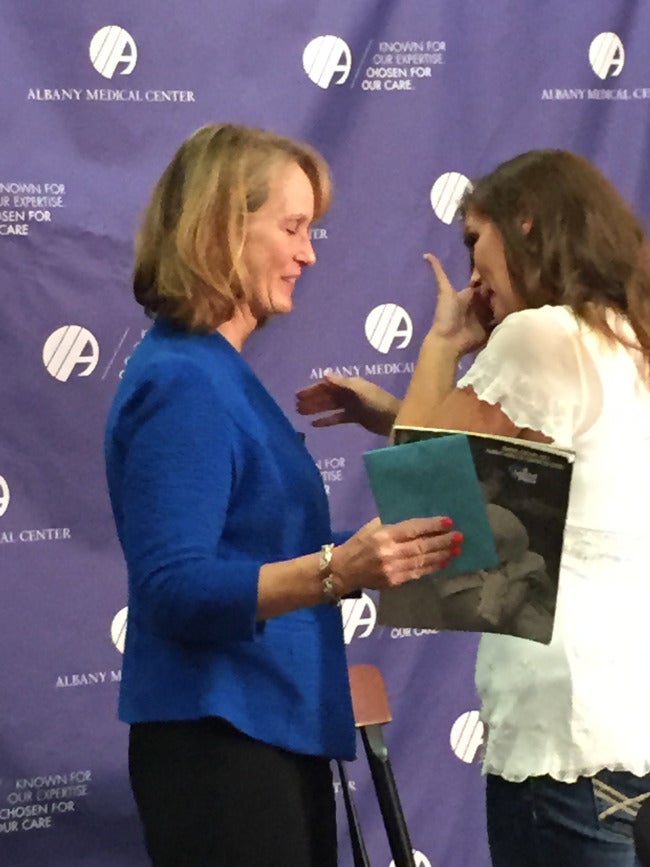 ALBANY, N.Y. (NEWS10) – It all started with a photo posted to social media and a plea for help finding the woman in it.

Amanda Scarpinati is the baby being held by nurse Sue Berger in a photo taken in 1977 at Albany Medical Center. It was so long ago, that the recovery room doesn’t exist anymore.

Scarpinati was just three months old in the image. She was recovering from severe burns after an accident.

Scarpinati endured years of surgeries for her wounds and said she would look at the picture every time she was bullied for her burns.

Scarpinati said the photo meant someone cared about her and for years, she hoped to one day meet Berger.

“Just to see the love and the caring in these pictures just blows my mind,” she said. “That a complete stranger can just open themselves up and care for you, and I just want to be able to thank her for that.”

On Tuesday, nearly 40 years after it was taken, Berger and Scarpinati were reunited, and both could hardly believe it was really happening.

Scarpinati said it felt like the excitement of Christmas. Berger gasped as she turned the corner to see Scarpinati’s face.

“You know, I held her for the longest time,” Berger recalled. “‘Does she really have to be discharged and go back to her unit now? I’d like a few more minutes.’ She was just so good and so trusting and amazing for such a tiny baby.”

Scarpinati first shared the photo of the pair on Facebook last week and asked the media to do the same.

Angela Leary, of Delmar, was also a nurse at Albany Medical when the picture was taken. She recognized Berger and helped make the reunion happen.

Berger said she didn’t realize how much of an impact she had by just loving and holding a baby.

“I think it’s just that reminder that you can make a difference,” she said. “You just have to remember to have that compassion every day, and nursing is very difficult to always stay on. Teachers are the same way. It’s just difficult to always be on, and you never know what you say or what you do can do for others.”

Scarpinati and Berger said they planned to spend some time together Tuesday evening and plan to keep in touch.