Oakland will give low-income families of color $500 per month, no strings attached 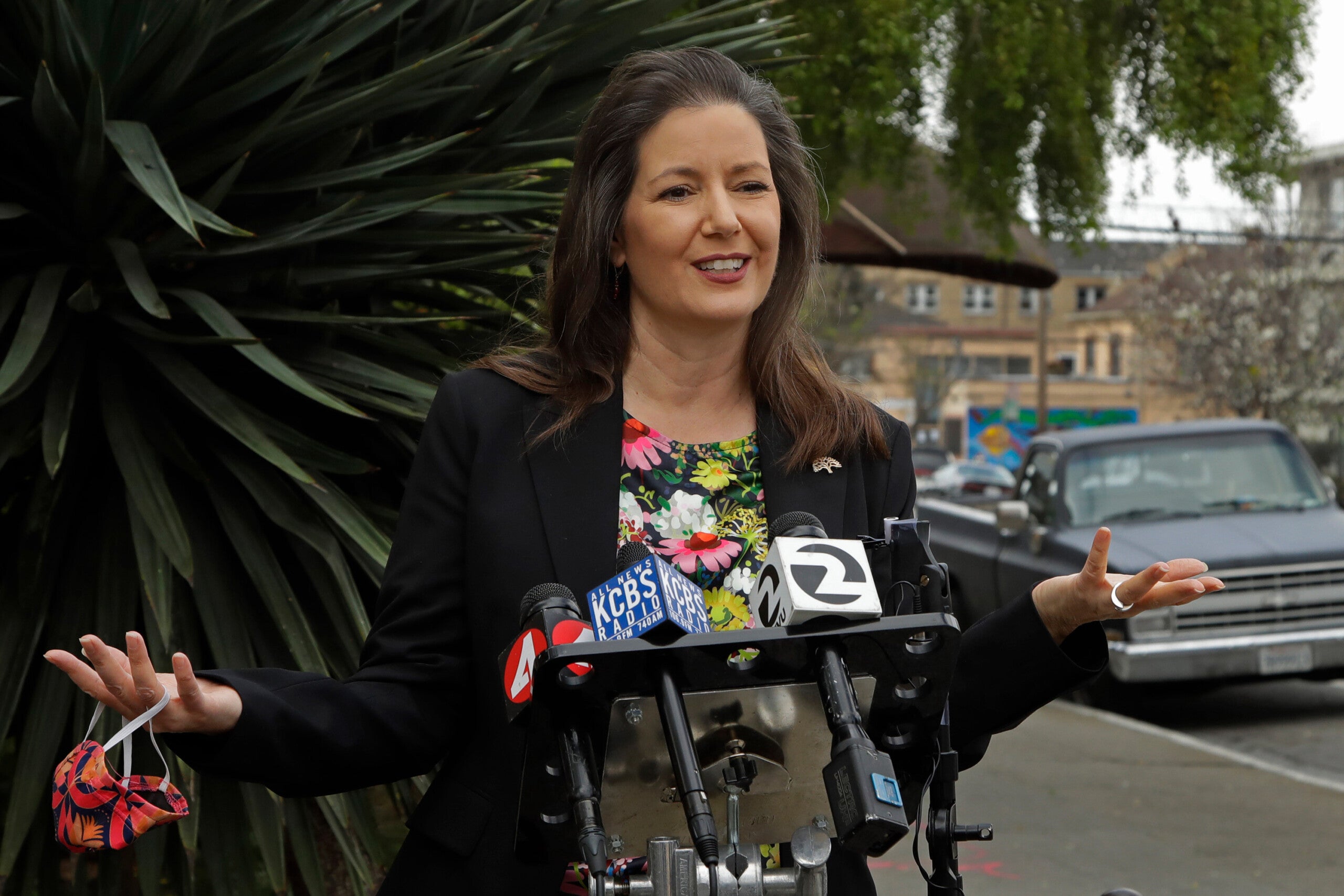 FILE - In this April 10, 2020, file photo, Oakland Mayor Libby Schaaf speaks at a news conference in Oakland, Calif. Mayor Schaaf on Tuesday, March 23, 2021, announced a privately funded program that will give low-income families of color $500 per month with no rules on how they can spend it. The program in Oakland is the latest example of "guaranteed income," an idea that giving poor people a set amount of money each month will ease the stresses of poverty that contribute to poor health and hinder their ability to find full-time work. (AP Photo/Ben Margot, File)
by: By Maria Morava and Scottie Andrew, CNN
Posted: Mar 24, 2021 / 12:27 PM EST / Updated: Mar 24, 2021 / 12:29 PM EST

(CNN) — Low-income families of color in Oakland, California, could receive some extra financial assistance over the next year and a half.

Oakland Mayor Libby Schaaf announced this week that the city will launch a guaranteed income project to give hundreds of Black and Indigenous families and people of color $500 per month for 18 months.

The project’s payments will be unconditional, and recipients may spend the money however they choose.

The Oakland Resilient Families program is the latest trial of a “guaranteed income” system of wealth distribution, where residents are given a set amount of money per month to supplement the existing social safety net.

The project targetsgroups with the city’s greatest wealth disparities, per the Oakland Equality Index, which reveals the median income for White households in Oakland to be nearly three times that of Black households.

“The poverty we all witness today is not a personal failure, it is a systems failure,” Schaaf said in a statement. “Guaranteed income is one of the most promising tools for systems change, racial equity and economic mobility we’ve seen in decades.”

Guaranteed income provides security to those who most need it

Instead, guaranteed income is only meant to supplement other wages and programs for low-income residents, helping to build the “income floor” on which people in poverty can begin to build financially secure lives.

Although the idea has seen a resurgence in recent years, it’s not new — Martin Luther King, Jr. advocated for it in his 1967 book, “Where Do We Go from Here: Chaos or Community?”

“I’m now convinced that the simplest approach will prove to be the most effective — the solution to poverty is to abolish it directly by a now widely discussed measure: the guaranteed income,” King wrote.

Other cities have implemented it

In 2019, 100 residents in Stockton, California, began receiving unconditional $500 payments. Other initiatives in Newark, New Jersey, and Atlanta, Georgia, were launched as recently as 2020.

Former Stockton Mayor, Michael Tubbs, is the founder of Mayors for a Guaranteed Income, a network of advocating mayors founded in 2020. Oakland Mayor Schaaf is also a founding member of the network.

“One of my hopes in testing out a guaranteed income is that other cities would follow suit, and I’m thrilled that Oakland is among the first,” Tubbs said. “By focusing on BIPOC residents, the Oakland Resilient Families program will provide critical financial support to those hardest hit by systemic inequities, including the pandemic’s disproportionate toll on communities of color.”

Oakland Resilient Families takes the guaranteed income model to new heights, with 600 families targeted for payments. The project, funded solely from philanthropic donations, has raised $6.75 million to date, of which it says at least 80% will be distributed.

To qualify for the Oakland Resilient Families payments, families must have at least one child under 18. Their income must be at or below the area’s median income: around $59,000 for a family of three.

But half of the available spots will be reserved for very low-income families — those who earn below 138% of the federal poverty level — or, about $30,000 per year for a family of three.

An online, multilingual screening form will be released later this spring and summer, after which families will be chosen at random to receive the payments. The program is also open to undocumented and/or unsheltered families. Because recipients will not be required to work for the payments, the money is not considered taxable income.

Oakland Resilient Families will partner with local community organizations and government leaders to incorporate community feedback during the project’s rollout, intended to be fully operational by the summer.