Parents of injured athlete say son is a fighter 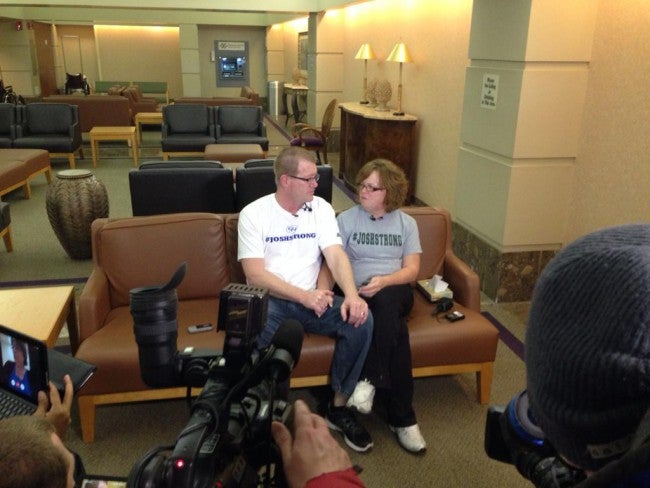 Josh was injured in a crash at the intersection of US 31 and Bear Lane Road in Taylorsville. He suffered from a fractured skull and broken jaw and has been hospitalized at IU Health Methodist Hospital since then. He’s currently listed in critical but stable condition.

On Wednesday, Josh’s parents said he’s a fighter. They said their son is on a ventilator but also breathing on his own. When they ask Josh to open his eyes and squeeze their hand, he doesn’t respond, but he does recognize some commands, the Speidels said.

Leaning on their faith is also what they have been doing from the second they learned their son was in a fight for his life.

“We are firm believers that God has a plan for all of this,” said David.

But that plan, along with how long it could take for their son to recover, is unknown. Doctors told the Speidels every brain injury is different just like the healing process.

If there’s one guarantee, it’s the endless support his family has heard, seen, and felt.

“It goes beyond Columbus,” the Speidels said.

A pep rally was held at Columbus North High School before his teammates took the floor, just two days after the crash. Josh’s parents couldn’t be there but said they listened to it on the radio.

“And then we had friends sending us videos of the chants and the cheers and taking pictures and sending those to us,” said Lisa. “It was emotionally overwhelming.”

Even the smallest messages, some no longer than 140 characters, made it to Josh. His parents said they read him every tweet and Facebook post with #JoshStrong, and they are confident he can hear them.

They just hope that in time, he’ll be able to read them on his own.

“God has him still for a reason and we’re excited that he’s healing and he’ll wake up when he’s ready. We believe,” David said.

The hashtag #JoshStrong started trending on Twitter shortly after the crash and a GoFundMe was set up to help the Speidels pay for Josh’s medical costs.