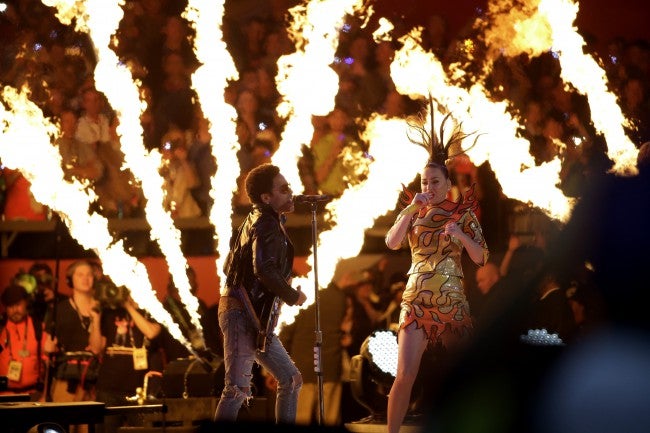 PHOENIX, Ariz. (KXAN) – She rode in on a giant tiger belting the lyrics to Roar and before it was all over Katy Perry head banged with Lenny Kravitz, got her freak on with Missy Elliott, and flew high above the stadium as fireworks shot into the sky.

Perry’s animatronic lion made for a terrific entrance for the flame-dress clad pop icon who prides herself in singing live during performances. She admitted in a news conference last week that there would “probably” be “some” pre-recorded vocals in the halftime show, but said she hoped that as much as possible would be live.

Her duet of “I kissed a girl and I liked it,” with Lenny Kravitz was a pyrotechnical fantasy. Flames towered over the duo as Perry fell to her knees and whipped her hair around with while Kravitz rocked on his guitar.

Perry donned a fun, summer themed dress for a rendition of “California Gurls” that was complete dirty dancing with sharks and beach balls.

There was little doubt we’d be treated with the bass chords of Missy Elliott’s “Get Ur Freak On,” and sure enough, no sooner than Perry slipped into an oversized jersey did that familiar beat drop. It’s not the first time Elliott and Perry joined forces to entertain the world. In 2011, Elliott was featured  in a Remix of Perry’s “Last Friday Night” that sent the song to the top of the charts.

Then, as Perry’s signature “Firework” began to play, Perry emerged in a new dress, decked out in stars, climbed into an elevator into the stars and belted out the song as she was lifted above the stadium. Fireworks and pyrotechnics were fired off inside the stadium and out as Perry gave the crowd one of her signature finales.

Twitter, meanwhile had a ball with Perry’s performance. Some people didn’t immediately recognize Lenny Kravitz as a musician but as an actor.

“why is that guy from Hunger Games playing guitar” – most people- Chase Mitchell (@ChaseMit) February 2, 2015

Others were already making Halloween plans:

And lastly, some folks saw a resemblance between NBC’s “The More You Know” and the grand finale.