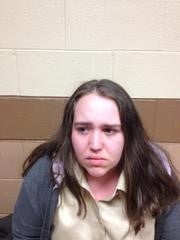 KINGMAN, Ind. (WISH) – Police say the parents of a neglected baby girl were arrested on Monday for her death.

On October 8, 2014, two-month-old Mellanie Briere was pronounced deceased when EMS arrived at at her parent’s home, according to police.

On Monday, Indiana State Police went to a residence at the 10 block of West State Street and served arrest warrants to Timothy J. Briere, 20, and Vanessa M. Largue, 20, both of Kingman.

Both suspects were transported to the Fountain County Jail.