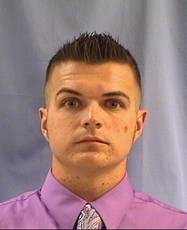 PLAINFIELD, Ind. (WISH) – After an internal investigation, a Plainfield correctional officer was arrested for trafficking drugs to inmates.

Daniel faces possible charges of trafficking with an inmate, a Level 5 felony, and dealing in a synthetic drug, a Level 6 felony.

With the arrest, Daniel was put on suspension without pay.

He was being held at the Hendricks County Jail on Friday.