Biden, Yellen to talk with Senate Democrats on virus aid 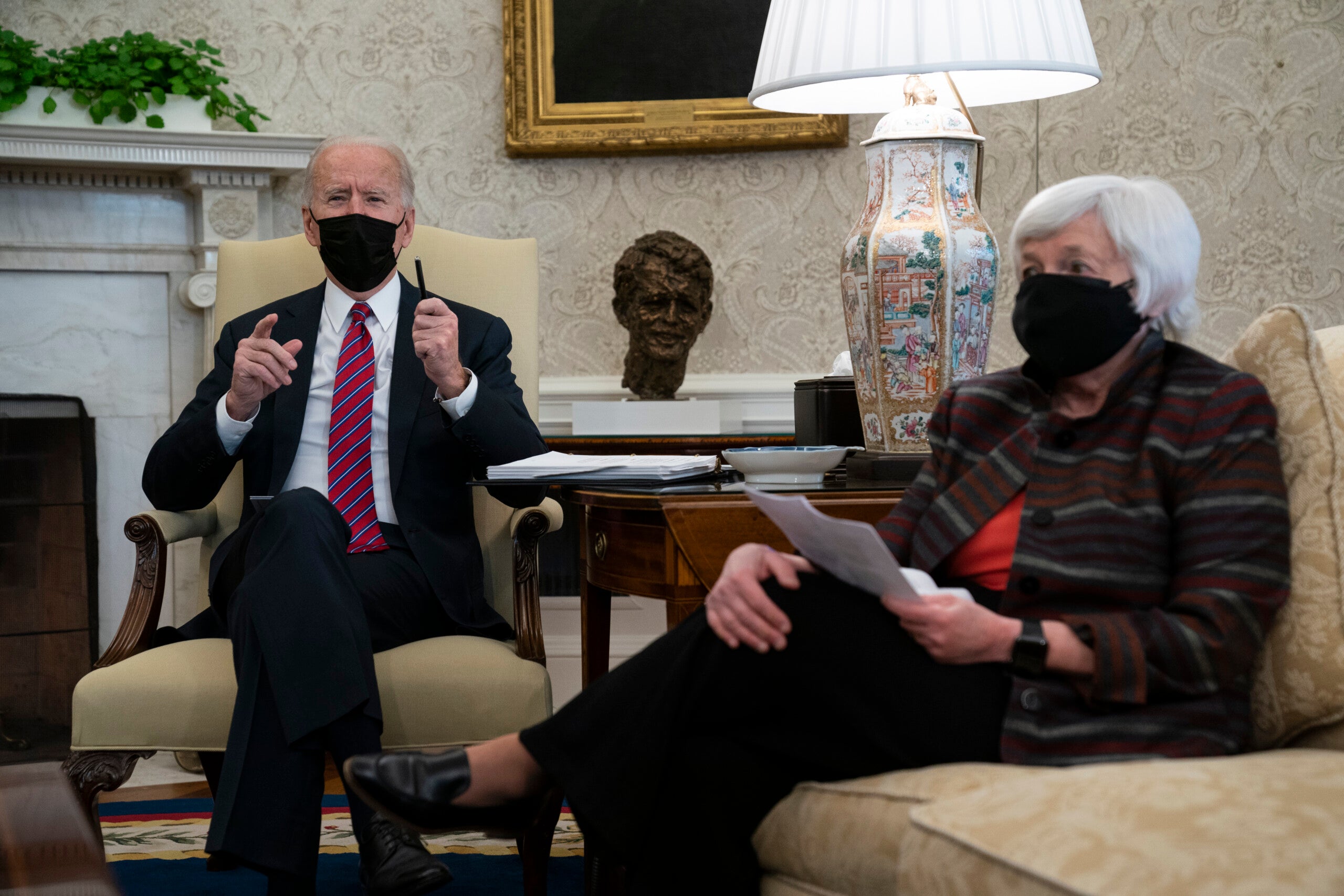 WASHINGTON (AP) — President Joe Biden will join Senate Democrats for a virtual lunch Tuesday to discuss his $1.9 trillion coronavirus rescue plan as Congress sets up votes to fast-track the sweeping aid package toward eventual approval with or without Republican support.

Biden and Treasury Secretary Janet Yellen will meet with the senators during the private session, both having urged lawmakers to act big in confronting the pandemic and economic crisis.

Senate Majority Leader Chuck Schumer announced the meeting as he, too, said Congress must take bold action toward “America’s long-awaited come back.” He set up a procedural vote for later Tuesday in the Senate, launching a lengthy budget procedure that would allow Democrats who have a slim majority to pass Biden’s proposal on their own if Republicans object.

The swift action on next steps comes after Biden told Republican senators during a lengthy two-hour meeting he’s unwilling to settle on an insufficient coronavirus aid package after they pitched their slimmed down $618 billion proposal.

No compromise was reached night during the Monday night meeting, Biden’s first with lawmakers at the White House. The president made it clear that he won’t delay aid in hopes of winning GOP support.

White House press secretary Jen Psaki said that while there were areas of agreement, “the president also reiterated his view that Congress must respond boldly and urgently, and noted many areas which the Republican senators’ proposal does not address.”

She said, “He will not slow down work on this urgent crisis response, and will not settle for a package that fails to meet the moment.”

White House officials have previously cited the U.S. Chamber of Commerce as evidence of broad support for their plan, but the nation’s most prominent business group issued a letter Tuesday that urged a bipartisan compromise.

“What we’ve seen based on what the president has put forward and what 10 Senate Republicans have put forward, there ought to be common ground for a bipartisan proposal that can become law,” said Neil Bradley, executive vice president and chief policy officer, said in an interview.

The Chamber’s letter said a move by congressional Democrats to use the budget process to pass an aid package along party lines could be damaging other parts of the Biden agenda such as infrastructure, climate change and overhauling immigration.

The two sides are far apart, with the Republican group of 10 senators focused primarily on the health care crisis and smaller $1,000 direct aid to Americans, and Biden leading Democrats toward a more sweeping rescue package to shore up households, local governments and a partly shuttered economy.

The goal is to have COVID-19 relief approved by March, when extra unemployment assistance and other pandemic aid expires, testing the ability of the new administration and Congress to deliver, with political risks for all sides from failure.

Republican Sen. Susan Collins of Maine called the meeting a “frank and very useful” conversation, noting that the president also filled in some details on his proposal.

“All of us are concerned about struggling families, teetering small businesses and an overwhelmed health care system,” said Collins, flanked by other senators outside the White House.

Republicans are tapping into bipartisan urgency to improve the nation’s vaccine distribution and vastly expand virus testing with $160 billion in aid. That is similar to what Biden has proposed. But from there, the two plans drastically diverge.

The GOP’s $1,000 direct payments would go to fewer households than the $1,400 Biden has proposed, and the Republicans offer only a fraction of what he wants to reopen schools.

They also would give nothing to states, money that Democrats argue is just as important, with $350 billion in Biden’s plan to keep police, fire and other workers on the job. Gone are Democratic priorities such as a gradual lifting of the federal minimum wage to $15 an hour.

Wary Democrats pushed ahead at the Capitol, unwilling to take too much time in courting GOP support that may not materialize or in delivering too meager a package that they believe doesn’t address the scope of the nation’s health crisis and economic problems.

House and Senate Democrats released a separate budget resolution Monday a step toward approving Biden’s package with a reconciliation process that wouldn’t depend on Republican support for passage.

The accelerating talks came as the Congressional Budget Office delivered mixed economic forecasts Monday with robust growth expected at a 4.5% annual rate but employment rates not to return to pre-pandemic levels for several years.

Asked if Biden had shown a willingness to reduce his $1.9 trillion top line, Republican Sen. Bill Cassidy of Louisiana, said, “He didn’t say that, nor did we say we’re willing to come up” from the GOP plan. He said it’s “too early” to say if a deal can be reached.

An invitation to the GOP senators to meet with Biden and Vice President Kamala Harris came hours after the lawmakers sent Biden a letter on Sunday urging him to negotiate rather than try to ram through his relief package solely on Democratic votes.

The cornerstone of the GOP plan is $160 billion for the health care response — vaccine distribution, a “massive expansion” of testing, protective gear and funds for rural hospitals, according to a draft. It also includes $20 billion to reopen schools compared to $170 billion in Biden’s plan. The Republicans offer $40 billion for Paycheck Protection Program business aid.

The meeting, though private, was Biden’s most public involvement in the negotiations.

Winning the support of 10 Republicans would be significant, potentially giving Biden the votes needed in the 50-50 Senate where Harris is the tie-breaker. Or he can push it through the budget reconciliation process, which would allow the bill to pass with a 51-vote majority in the Senate, rather than the 60 votes typically needed to advance legislation.

Biden has leaned on his resume of decades in the Senate and as vice president to bring the parties together, but less than two weeks into his presidency he has shown frustration with the pace of negotiations as applications for jobless benefits remain stubbornly high and the COVID-19 death toll nears 450,000 Americans.