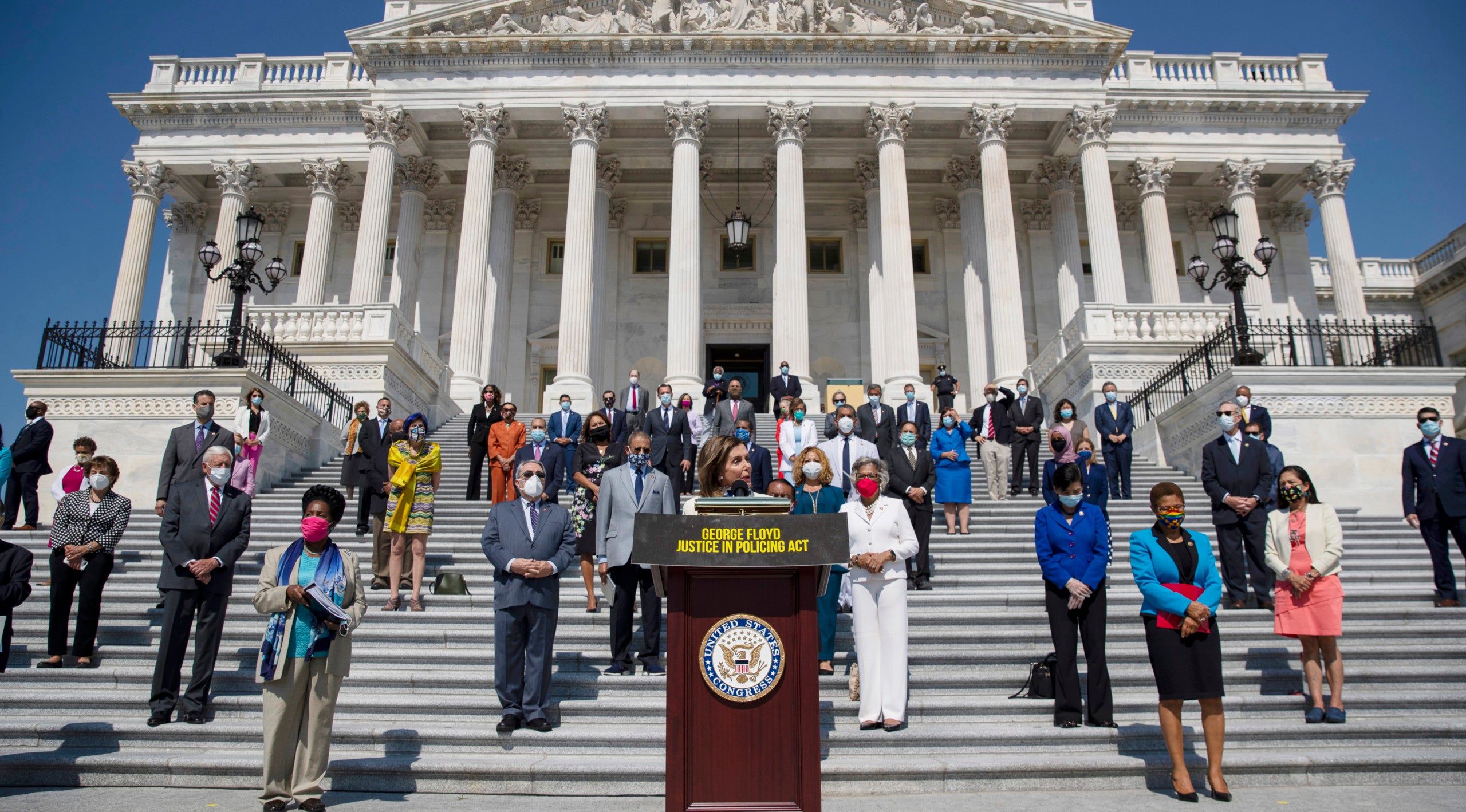 (CNN) — The House of Representatives on Thursday passed policing legislation named in honor of George Floyd, whose death in police custody has sparked nationwide calls to address police misconduct and racial injustice and prompted weeks of protests and civil unrest.

The bill passed largely along party lines amid Republican opposition with a final tally of 236-181. Three Republicans crossed party lines to vote in favor: Brian Fitzpatrick of Pennsylvania, Will Hurd of Texas, and Fred Upton of Michigan.

The legislation was put forward by House Democrats and is not expected to be taken up in the Senate. Its passage comes a day after Democrats blocked a competing Republican bill in the upper chamber.

Despite calls from both parties for quick action to address police misconduct, efforts to find common ground have largely devolved into partisan finger-pointing as each side takes issue with the other party’s approach. As a result, Capitol Hill is in a stalemate.

The House legislation — titled the George Floyd Justice in Policing Act of 2020 — has provisions to overhaul qualified immunity for law enforcement, prohibitions on racial profiling on the part of law enforcement and a ban on no-knock warrants in federal drug cases. It would ban chokeholds at the federal level and classify them as a civil rights violation, and would establish a national registry of police misconduct maintained by the Department of Justice.

“Today with the George Floyd Justice in Policing Act, the House is honoring his life and the lives of all those killed by police brutality and pledging: Never again,” House Speaker Nancy Pelosi said at a press event on Thursday ahead of the vote.

“When we pass this bill, the Senate will have a choice: to honor George Floyd’s life or to do nothing,” the California Democrat added.

Pelosi said last week that she had hoped to bring the Democratic legislation to conference with the Senate GOP proposal. It is unclear, however, whether the Senate will be able to pass any kind of policing measure after the defeat of the Republican proposal on Wednesday. Senate Majority Leader Mitch McConnell has already shot down the House’s plan, saying it is an overreach and will not advance in the Senate.

As efforts to enact reform are taking place in a presidential election year, the odds of finding a compromise in the coming months may be even more slim than usual on Capitol Hill.

“The House will do its duty and pass the Justice in Policing bill today. I hope the Senate will do the same, but I fear it will not,” House Judiciary Chairman Jerry Nadler said Thursday morning.

Senate Democrats on Wednesday criticized the GOP policing reform proposal as an inadequate response to the national calls to address police misconduct, and they denied Republicans the votes needed to clear a procedural hurdle and open floor debate on the legislation.

Senate Republicans have criticized Democrats in return, arguing that they are being obstructionist and shutting down an open legislative process.

South Carolina Republican Sen. Tim Scott, who introduced the GOP measure, slammed Democrats for blocking debate and said the move was “about politics, and a refusal to find a solution.”

“Americans made their voices clear: they want police reform and they want it now. It is incredibly disappointing we are missing a moment in time when both parties in Congress have significant agreement on how our country can change for the better. The fact of the matter is strong majority of the provisions of the Republican JUSTICE Act and the Democratic Justice in Policing Act are the same. Unfortunately, House Democrats chose to not work with the House Republicans on this lifesaving legislative moment. House Democrats instead will only accept 100 percent of what they want. History teaches us that any meaningful reforms must be bipartisan to succeed, which is why I’m incredibly disappointed Democrats chose to put election messaging before meaningful reform. Americans should know that it wasn’t the Republicans who chose to not come to the negotiating table. Republicans still stand ready to work with Democrats to provide meaningful reforms to police practices.

“The devastating reality of the Democrats politicizing this issue is that we will not enact reform now and eventually we will find ourselves in this very same situation debating this very same issue in the future. There is a strong will on both sides of the aisle to pass police reform legislation. I encourage my Democratic colleagues to work with us on getting this done once to help secure justice for all.”

“Hoosiers are grieving the countless loved ones we have lost to police brutality and racism, and are demanding change,” said Rep. Carson. “The House’s passage of the Justice in Policing Act is a bold step towards much-needed reforms, with provisions that address systemic racism and help save Black lives while increasing transparency to ensure police are held accountable. As a former law enforcement officer, I know this bill will make a positive difference. I am pleased that it also includes many of the recommendations I’ve made over a number of years – especially requiring body cameras and dash cams.”

“I also want to thank the passionate advocacy of Hoosiers and people across America, as well as the leadership of the Congressional Black Caucus, and a host of civil rights organizations, for helping to create this strong and effective legislation. I believe it represents a turning point in our march towards justice.”

“As someone who was unjustly arrested at a young age, I understand the urgent need to reconstruct policing to better connect law enforcement to the communities they serve,” said Rep. Carson. “The George Floyd Justice in Policing Act will help achieve this goal, but there’s still much more work to be done at the local, state and federal level. I urge the Senate to put politics aside and pass this legislation, and I pledge to continue working hard to ensure our justice system reflects the fundamental truth that Black Lives Matter.”

“I have heard the voices of Hoosiers and others across America calling out for police reform. That is why I co-sponsored the JUSTICE Act, which would increase accountability, improve training methods, and further transparency between local, state, and federal law enforcement to stop tragic events, such as the death of George Floyd from happening.  The JUSTICE Act is a commonsense bill that can be signed into law by President Trump – if Washington Democrats would reach across the aisle and work with Republicans in Congress.

“Unfortunately, Democrats in the Senate blocked the JUSTICE Act from even being debated, showing the true agenda of Congressional Democrats is not police reform, but rather further fanning the flames of division and dividing Americans in order to gain votes in the 2020 election. That is why Speaker Pelosi introduced the Justice in Policing Act, a partisan bill written behind closed doors in the Speaker’s office. House Democrats didn’t even try to work with House Republicans to come up with reform legislation that Republicans and Democrats could support. The American people must know that Republicans in Congress stand ready to work with Democrats to advance bipartisan, commonsense reforms that President Trump could sign into law. However, solving problems is not in the interest of Democrats running for office in 2020 – they seemingly would rather push far-left, partisan rhetoric that might gain them votes instead of enacting reforms that would keep Americans safe.”