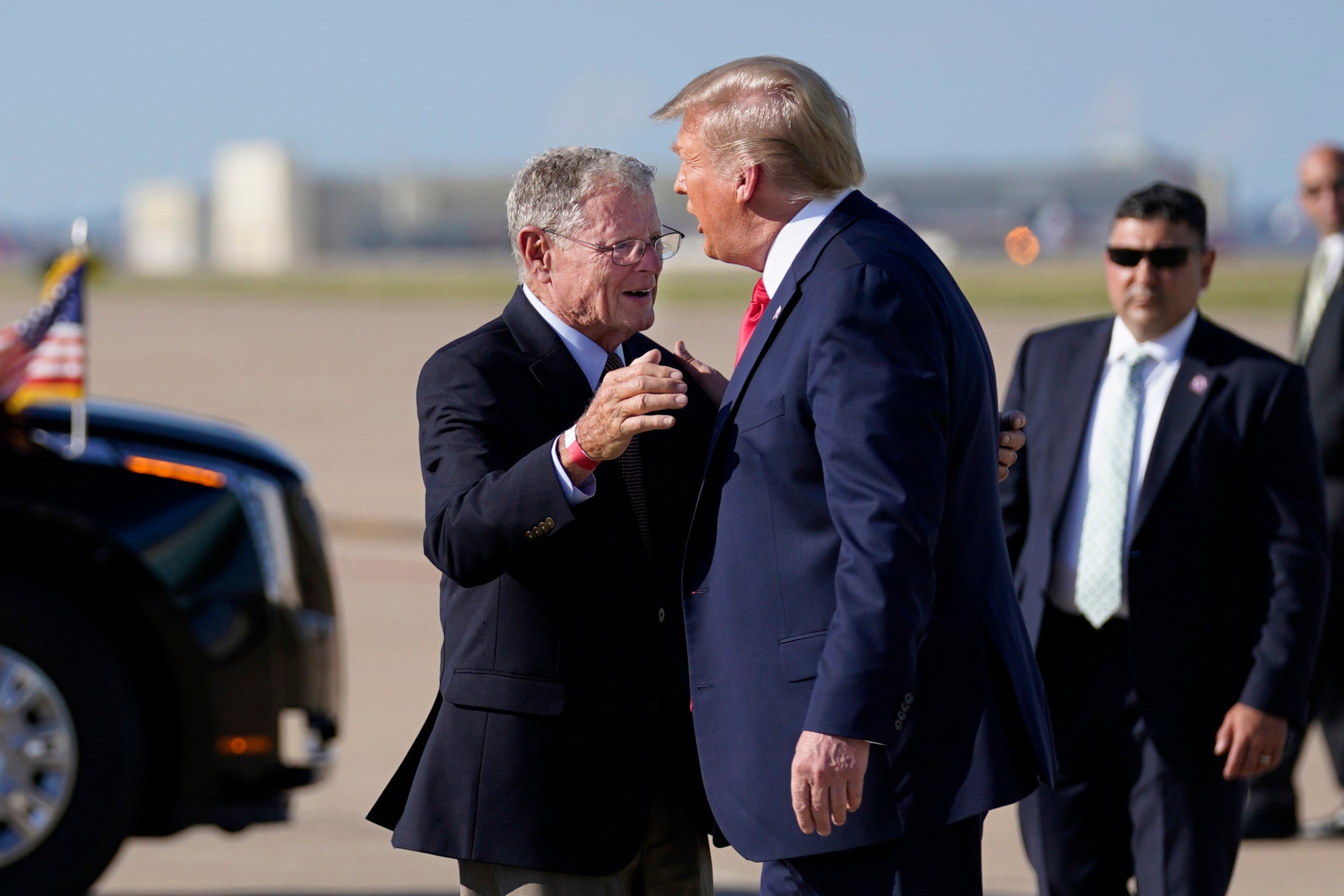 FILE - In this June 20, 2020 file photo, Sen. Jim Inhofe, R-Okla., hugs President Donald Trump as he arrives at Tulsa International Airport in Tulsa, Okla. Trump said in a tweet Friday that he had spoken to Oklahoma Sen. Jim Inhofe, the Republican chairman of the Senate Armed Services Committee, “who has informed me that he WILL NOT be changing the names of our great Military Bases and Forts, places from which we won two World Wars (and more!).″ (AP Photo/Evan Vucci)
by: MATTHEW DALY, Associated Press
Posted: Jul 24, 2020 / 04:32 PM EST / Updated: Jul 24, 2020 / 04:32 PM EST

WASHINGTON (AP) — President Donald Trump and a top Senate Republican are pushing Congress to preserve the names of military bases that honor Confederate generals, even though the House and Senate have overwhelmingly approved bills that rename them.

Trump said in a tweet Friday that he had spoken to Oklahoma Sen. Jim Inhofe, the Republican chairman of the Senate Armed Services Committee, “who has informed me that he WILL NOT be changing the names of our great Military Bases and Forts, places from which we won two World Wars (and more!).″

Like him, Inhofe “is not a believer in ‘Cancel Culture,’ ” Trump said.

Inhofe, a staunch conservative and close Trump ally, also opposes the name change, even though he led Senate approval of the defense bill that would mandate name changes at Fort Bragg, Fort Benning and other Army posts named for Confederate generals.

Inhofe told The Oklahoman newspaper that he spoke with Trump on Thursday about the base names, adding: “We’re going to see to it that provision doesn’t survive the bill. I’m not going to say how at this point.”

Defense policy bills approved by both the House and Senate would change the names of 10 Army posts that honor Confederate leaders. The two versions must be reconciled, but both bills were approved by veto-proof margins this week.

White House press secretary Kayleigh McEnany said Friday that the White House would “leave that to Senator Inhofe as to how that works legislatively speaking,” but said Trump “was assured by Sen. Inhofe that that (provision) would be changing and that Republicans stood with the president on this.”

The top Democrat on the Senate Armed Services panel said Trump was “on the wrong side of history” trying to defend traitors who “fought to preserve slavery.”

“The diverse men and women of today’s United States Armed Forces are united in defending our nation and serving a cause greater than themselves,” said Sen. Jack Reed, D-R.I. “We should put their interests ahead of those who fought to preserve slavery.”

If Trump vetoes a bill with a 3% pay raise for U.S. troops “in an attempt to get his way, it will severely backfire and he should be overridden by Congress,” Reed said.

Forty-nine GOP senators voted for the defense bill that includes the base-renaming, while just four Republicans voted against it. Thirty-seven Democrats supported the bill, and 10 opposed it. The $741 billion measure would authorize all defense programs worldwide.

Colorado Sen. Cory Gardner, one of the GOP’s most vulnerable incumbents in the election, said he had no problem with renaming the bases. “If it’s something we can do to heal this country and bring people together, let’s do it,” Gardner told reporters Friday after an event with Ivanka Trump, the president’s daughter, in a Denver suburb.

“Let’s learn from the last several months of division and put the country together,” Gardner said.

Gardner’s comment illustrated how Trump’s tweet had unsettled GOP allies on a high-profile issue they thought had been resolved involving race and the military.

The debate over the military bases comes amid a reckoning over racism sparked by the police killing of George Floyd, a Black man in Minneapolis. The Democratic-controlled House has approved a bill to remove statues of Gen. Robert E. Lee and other Confederate leaders from the Capitol, and Speaker Nancy Pelosi last month ordered that the portraits of four speakers who served the Confederacy be removed from the ornate hall just outside the House chamber.

A spokesman for Senate Majority Leader Mitch McConnell, a Kentucky Republican who also is seeking reelection and voted in favor of the defense bill, declined to comment Friday. The aide steered a reporter to a statement McConnell made on the Senate floor praising the defense bill and its strong bipartisan support.

There are 10 Army posts named for Confederate military leaders, including Fort Hood in Texas, Fort Benning in Georgia, Fort Bragg in North Carolina and Forts Robert E. Lee and A.P. Hill in Virginia.

The House bill would require the base names to be changed within a year, while the Senate would give the military three years to rename them.

The Senate’s top Democrat, Minority Leader Chuck Schumer of New York, has dared Trump to veto the defense bill over Confederate base names. “It’s in the bill. It has bipartisan support. It will stay in the bill,” Schumer said earlier this month.

Congress has approved the annual defense measure every year for almost six decades. It typically enjoys veto-proof support, though various controversies often delay final passage until late in the year.