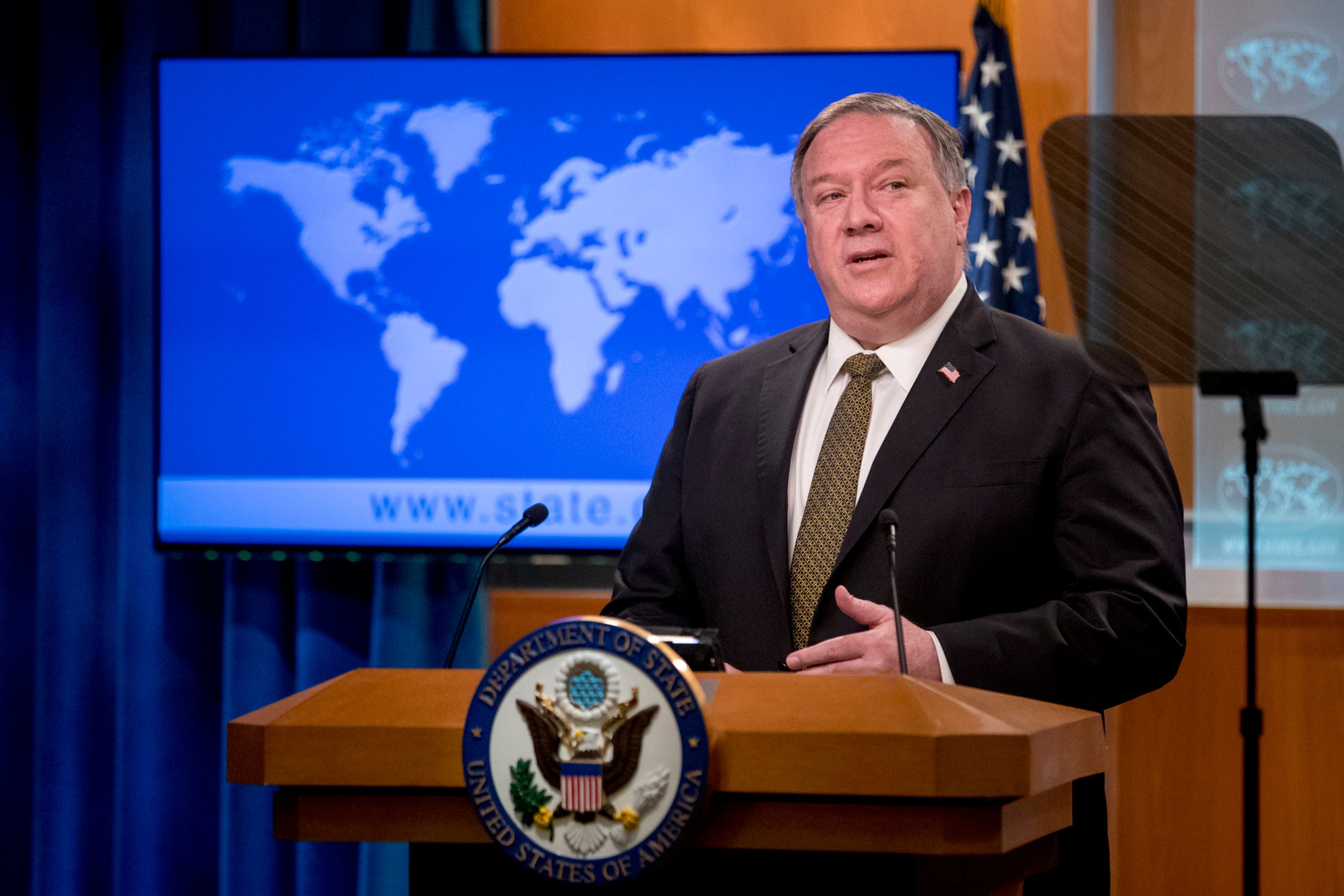 Secretary of State Mike Pompeo speaks during a news conference at the State Department in Washington,DC on June 10, 2020. - US Secretary of State Mike Pompeo pledged a probe Wednesday into complaints that foreign news crews covering the street protests against racism and police brutality were mistreated. Australia, for instance, is investigating a US police attack on two Australian television journalists outside the White House last week."I know there have been concerns from some countries of their reporters having been treated inappropriately," Pompeo told a news conference. (Photo by Andrew Harnik / POOL / AFP) (Photo by ANDREW HARNIK/POOL/AFP via Getty Images)
by: Jennifer Hansler, Kylie Atwood and Nicole Gaouette, CNN
Posted: Jul 20, 2020 / 02:02 PM EST / Updated: Jul 20, 2020 / 02:02 PM EST

(CNN) — A State Department official raised concerns to the agency’s watchdog about “questionable activities” related to Secretary of State Mike Pompeo’s conduct, according to a whistleblower complaint made public in recent days.

The complaint was filed with the State Department Office of Inspector General (OIG) by an employee who said they “directly witnessed and/or heard numerous firsthand accounts” of the behavior.

It is unclear when the complaint was filed with the OIG. Inspector General Steve Linick, who was fired on Pompeo’s recommendation in mid-May, told lawmakers that his office was looking into five matters of potential wrongdoing at the State Department.

Although it is unclear from the heavily redacted four-page document what specific concerns were raised by the whistleblower, they note that there were attempts “on several occasions to obtain clarifications from senior leadership in (the Executive Secretariat) and from the Office of the Legal Advisors,” but those who tried “were blocked from doing so.”

The whistleblower also said that to their knowledge there was no action taken to “resolve the issues” and “several” of the individuals whose names are redacted in the complaint “specifically directed subordinate staff to continue facilitating questionable activities after the concerns were raised.”

The complaint was obtained by the watchdog group American Oversight, which has sued “for any records of complaints filed by employees concerning the conduct of Mike Pompeo during his tenure as secretary of state or CIA director.” It was first reported by McClatchy.

Clark Pettig, the spokesperson for American Oversight, said the whistleblower complaint shows what kind of red flags were being raised about Pompeo’s conduct at the State Department.

“From the outside, Secretary Pompeo’s conduct has been deeply troubling for a long time, and now we can see the kind of red flags it was raising inside the State Department. Even with the heavy redactions, the details of this complaint are cause for concern as Secretary Pompeo continues to hold questionable, political events around the country,” he said.

The State Department did not reply to a request for comment.

Among the issues Linick’s office was investigating at the time of his ouster were Pompeo’s potential misuse of taxpayer resources and his decision to expedite an $8 billion arms sale to Saudi Arabia.

Pompeo has denied that he was aware of ongoing probes related to his conduct and insisted that his recommendation to fire Linick was not retaliatory. Instead, Pompeo accused him of undermining the department’s mission and of not following directions, despite the inspector general’s mandate as an independent watchdog.

However, Linick told Democratic and Republican lawmakers and select staff from the House Foreign Affairs and House Oversight committees, and Democrats from the Senate Foreign Relations Committee in early June that he didn’t believe there was “any valid reason that would justify (his) removal.”

Pompeo’s push to fire the inspector general reportedly looking into his actions at the oldest US Cabinet agency refocused scrutiny of the top US diplomat’s transparency record and his activities at home and abroad.

Amid speculation about Pompeo’s political future, meetings with political donors or important domestic constituencies have been excluded from the manifest that is given to traveling press who are charged with tracking his work. In London in December 2019, for example, Pompeo attended an off-the-books sit-down meeting with a conservative group that included a small number of wealthy Republican donors.

In Florida, according to the Tampa Bay Times, Pompeo reportedly made a stop at the politically powerful retirement community called the Villages, which was not disclosed on his public schedule.