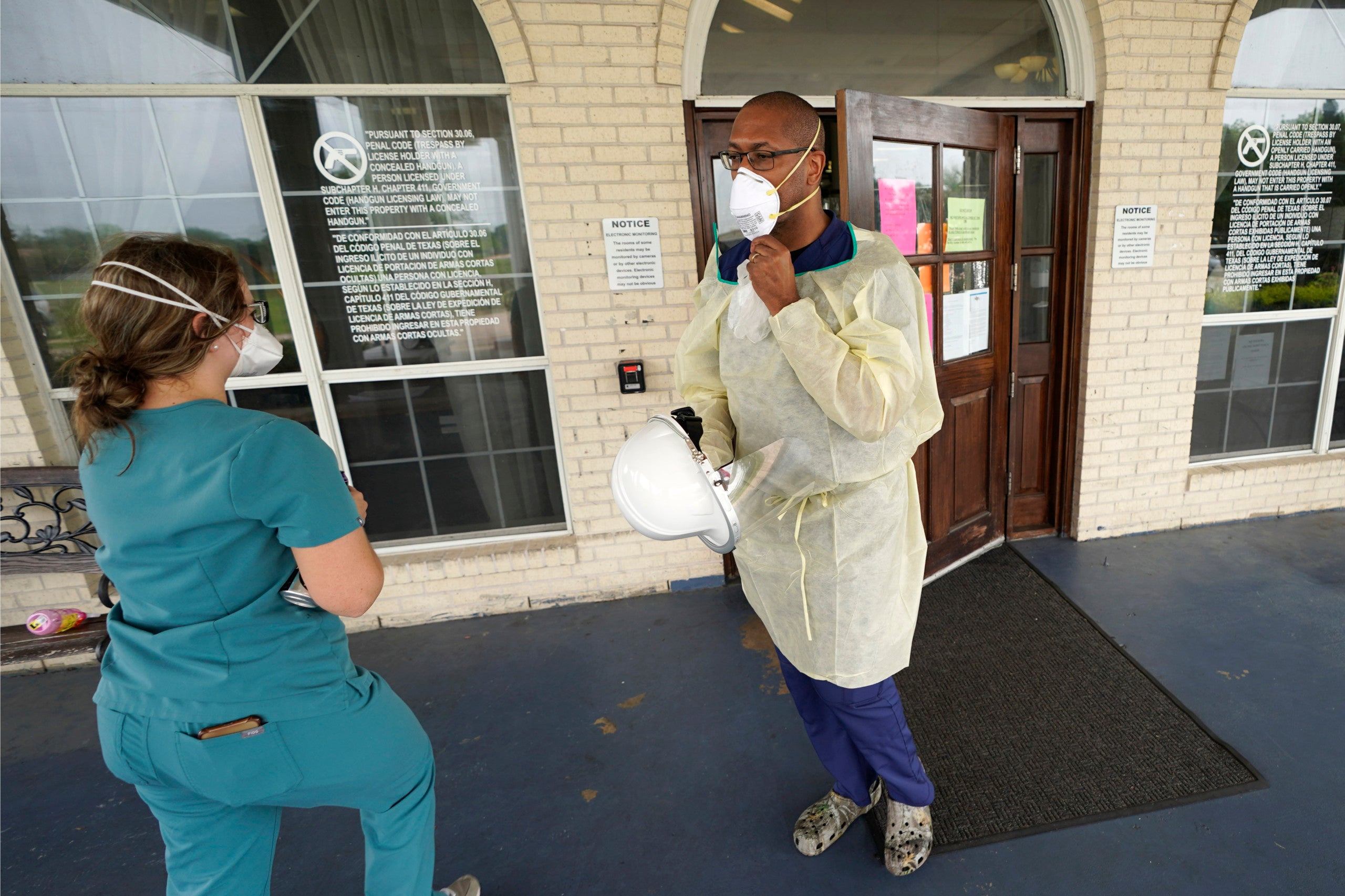 Dr. Robin Armstrong, right, adjusts his mask outside the entrance to The Resort at Texas City nursing home, where he is the medical director, Tuesday, April 7, 2020, in Texas City, Texas. Armstrong is treating nearly 30 residents of the nursing home with the anti-malaria drug hydroxychloroquine, which is unproven against COVID-19 even as President Donald Trump heavily promotes it as a possible treatment. Armstrong said Trump's championing of the drug is giving doctors more access to try it on coronavirus patients. More than 80 residents and workers have tested positive for coronavirus at the nursing home. (AP Photo/David J. Phillip)
by: DARLENE SUPERVILLE and BERNARD CONDON Associated Press
Posted: May 11, 2020 / 04:36 PM EST / Updated: May 11, 2020 / 04:39 PM EST

WASHINGTON (AP) — With deaths mounting at the nation’s nursing homes, the White House strongly recommended to governors Monday that all residents and staff at such facilities be tested for the coronavirus in the next two weeks.

Why the government is not ordering testing at the the nation’s more than 15,000 nursing homes was unclear. Nor was it clear why it is being recommended now, more than two months after the nation’s first major outbreak at a nursing home outside of Seattle that eventually killed 43 people.

“We really believe that all 1 million nursing home residents need to be tested within next two weeks as well as the staff,” added Dr. Deborah Birx, the task force coordinator, according to a recording of the call obtained by The Associated Press.

More than 26,000 residents and staff have died from outbreaks of the virus at the nation’s nursing homes and long-term care facilities, according to an AP tally based on state health departments and media reports. That is about a third of all 76,000 deaths in the U.S. that have been attributed to the virus.

Nursing home operators have said the lack of testing has left them nearly powerless to stop the virus from entering their facilities because they haven’t been able to identity silent spreaders among already sick residents and staff not showing symptoms.

Charlene Harrington, a professor emeritus of nursing at the University of California, San Francisco, said nursing homes should have been prioritized from the start given their vulnerable populations and questioned why the testing recommendation is only happening now.

“We’re two months into it,” she said. “If they had done that to begin with, we would’ve picked up cases early and we wouldn’t have so many deaths.”

Representatives for the federal Centers for Medicare & Medicaid Services did not immediately respond when asked why the agency wasn’t making testing a requirement, as it did in mid March when it ordered all homes to cease group gatherings and visitations, and to screen staff with such measures as temperature checks.