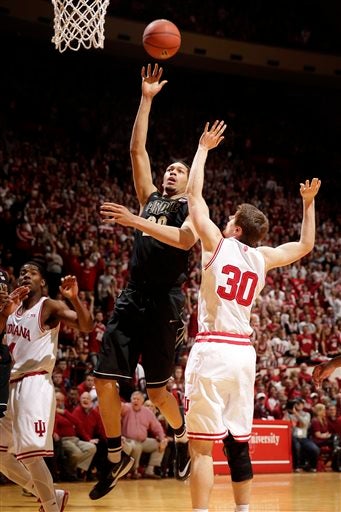 Rapheal Davis gave Purdue the lead for keeps at 64-61 with back-to-back driving layups at the 1:21 mark and again with 36 seconds to play.

Davis finished with 11 points and 10 rebounds, and Hammons added 20 points. Haas added 12 points and nine rebounds as Purdue won in Bloomington for the first time since a 72-61 triumph on Feb. 23, 2011.

Ferrell led Indiana (18-9, 8-6) with 21 points. Troy Williams and James Blackmon, Jr. each added 14 for Indiana, which made only five 3-pointers after sinking 18 on Sunday against Minnesota.

Ferrell’s driving layup just ahead of the buzzer gave Indiana a 29-27 halftime lead, although the Hoosiers scored only nine points during the first half’s final 10:37.

But with Isaac Haas contributing six points and Jon Octeus five, the Boilermakers mounted a 15-7 run to tie it at 27 before Ferrell’s buzzer-beater.

Indiana made eight of its first 11 field goal attempts.

Purdue: The Boilermakers entered 9-31 all-time in Indiana’s Assembly Hall. … Before facing the Hoosiers, Purdue had won six of its most recent seven games. … In Big Ten games, Purdue leads the conference in field-goal percentage defense at 38.8.

Indiana: Yogi Ferrell made two 3-pointers in the opening half, extending his streak of consecutive games with at least one trey to 58. … Indiana entered shooting 41.7 percent from 3-point range, third best in the nation. … The Hoosiers have six victories against teams in the RPI Top 50, best in the Big Ten.