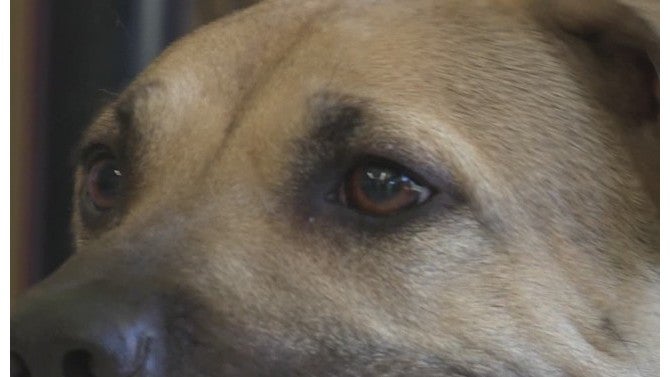 INDIANAPOLIS (WISH) — New Indianapolis-based research is the first in the world to quantify the correlations and implications of intimate partner violence and animal abuse.

Researcher Andrew Campbell from Campbell Research & Consulting worked alongside Indianapolis Metropolitan Police Department officers and other community groups to gather the data and conclude that animal violence and domestic violence are not only correlated, but have serious implications for public safety.

“Utilizing Marion County police officer data, we found intimate partner violence occurring at a rate here in Marion County that was eight times the national rate reported by the DOJ (the U.S. Department of Justice),” Campbell said. “When we started to look at the severity of these incidents, pet abuse seemed to come out and as an indicator of severity, of risk.”

His research concluded that in cases where both intimate partner abuse and animal violence were present, 74 percent of victims experienced strangulation. Almost one-third had a history of sexual assault or rape. Children were also present in the home in 60 percent of the cases. Campbell also learned 70 percent of suspects report either having easy access to or owning a firearm. A total of 78 percent of the victims feared they would eventually be killed by the suspect.

The suspects “are presenting a risk to the victims in the home, to first responders responding, but also to the community because they’re also fleeing the scene under the influence of a substance,” Campbell said.

He added that substance abuse is also common in cases with offenders acting violent toward both humans and animals.

“We probably get a couple calls a week for someone who’s looking for shelter and is afraid to do that because of a pet in their life,” said Catherine O’Connor, president and CEO of The Julian Center in Indianapolis, which helps survivors of domestic and sexual violence. “Pets can be used as tools to exert power and control over another person in a domestic violence relationship.”

O’Connor and the Julian Center hosted a community informational gathering last week to hear the results of Campbell’s research and try as a community to come up with cooperative solutions. Indianapolis Animal Care Services were also in attendance.

“Right now we are all very separate in what we’re dealing with and we want open up those lines of communications to see how we can be more effective in addressing the big picture,” said Katie Trennepohl from Indianapolis Animal Care Services. “We have seen an increase in the last 10 years in care and treatment calls and calls for animal abuse.”

Already several agencies have met to discuss risk factors for domestic violence and animal abuse and how to help victims safely exit the situation with their pets. The Julian Center’s O’Connor said pets are powerful therapy companions and should be a part of the solution.

More community conversations are in the works from The Julian Center to educate the public on all issues associated with domestic violence, including gang connections, mental health issues and substance abuse. Campbell is also working on new research, partnering with the Indiana University School of Medicine to study the effect domestic violence has on pregnant victims.

If you or someone you know is experiencing domestic violence or sexual assault, call 211 for help and 911 in an emergency. If you are aware of animal abuse in Indianapolis, call Indianapolis Animal Care Services at 317-327-4622.