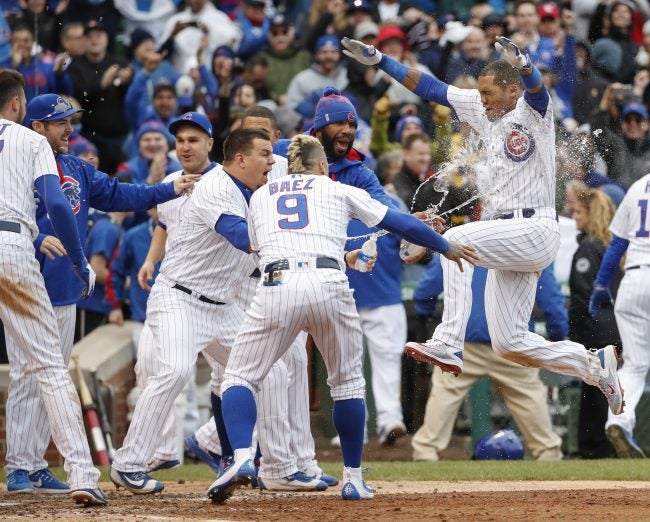 Chicago trailed 4-1 before Willson Contreras’ RBI single in the sixth Carlos Torres, and Russell’s run-scoring single cut the deficit to one run in the eighth.

Trying for his first four-out save this year, Feliz (0-2) struck out Javier Baez to strand a runner on third. But Jon Jay walked with one out in the ninth, took third on a single by pinch-hitter Miguel Montero and scored on Kris Bryant’s single.

Anthony Rizzo ground out, and Russell hit his second home run this season, a drive into the left-field bleachers.

Wade Davis (2-0) worked around a walk in the ninth to win in relief of Kyle Hendricks, who tied his career-high with four walks in five innings. Travis Shaw and Jett Bandy homered off Hendricks, who finished third in the NL Cy Young Award voting last year.

Brewers starter Tommy Milone allowed one run and three hits in five innings on a cold afternoon at Wrigley Field, where the temperature dipped into the 40s. Rain delayed the start by 55 minutes.

Chicago went 4-5 on its first homestand this year as World Series champion. Hendricks walked Milone in the fourth – the first time in his four-year big league career that Hendricks walked a pitcher.