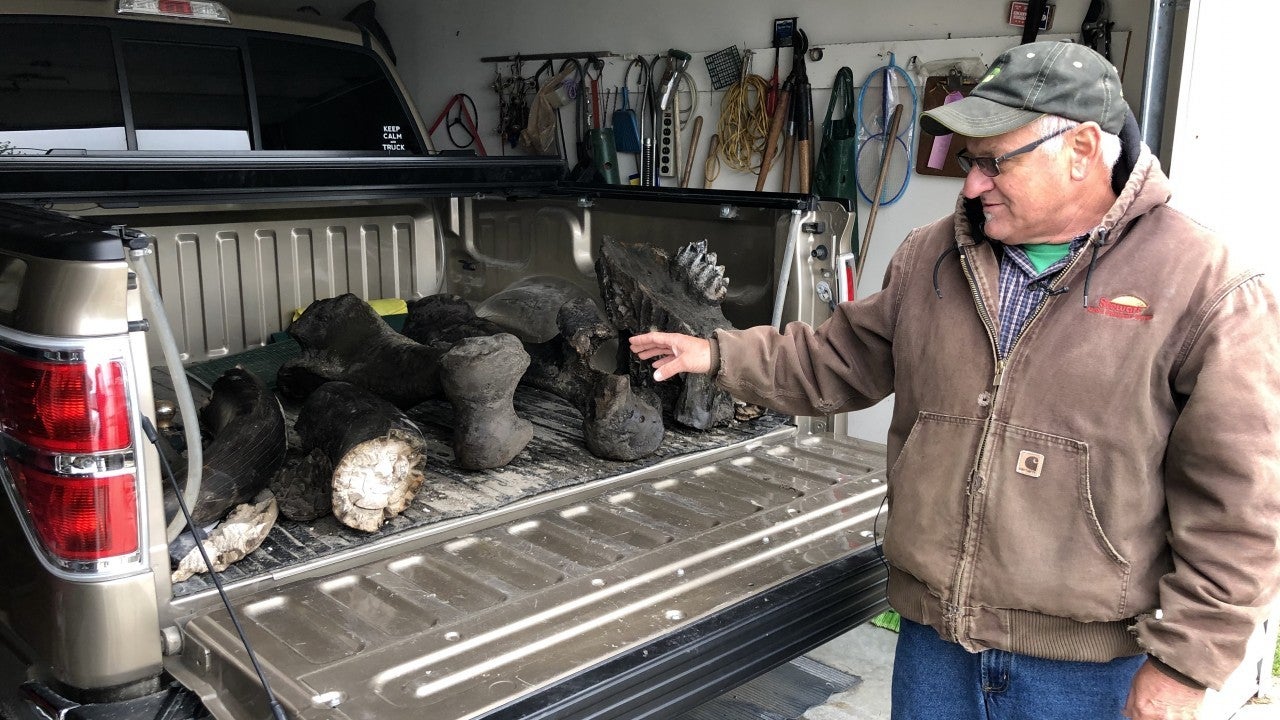 He stood more than 9 feet tall, weighed an estimated 12,000 pounds and roamed the Earth during the Pleistocene epoch.

His gravesite would later be farmed by an Indiana family unaware of his fossilized remains and accidentally excavated by workers installing sewer lines in Seymour.

Portions of his tusk, skull, jawbone, teeth, two upper-leg bones, vertebrae and a joint would be unearthed more than 13,000 years after his death.

He was a mastodon, a paleobiologist declared after examining the bones.

Joe Schepman, whose family owns the property where the ancient mammal’s remains were found Saturday by Atlas Excavating workers, told News 8 he was “overwhelmed” by the unexpected discovery.

“It’s hard to wrap your head around something being that old,” he said. “They didn’t talk about history going that far back when we were in school.”

WATCH: Check the video to see how News 8 was loaned a bone

Schepman named the mastodon Alfred in honor of his grandfather. Alfred Schepman was born in 1905 and established the family farm on the east side of Seymour, approximately 60 miles south of Indianapolis.

Ancient Alfred lived between 13,000 and 20,000 years ago, according to Ron Richards, senior research curator of paleobiology at the Indiana State Museum. Radiocarbon dating results will be available within several weeks, he said.

“You just can’t imagine something that large and that old — that long ago — was traipsing around on this property,” said Schepman, gazing at the bones in the bed of his pickup. “The farm probably was a swamp when this creature was roaming around. And you have to wonder if he sunk in the mud or what actually happened when he died.”

Did Alfred suffer? Was he alone? Did he have a family? Could their fossilized bones also be buried near Schepman Farms?

The family has no plans to fund digs for additional mastodon bones on their property, they said Friday, but welcomed answers about the creature temporarily housed in their garage.

He will likely be moved to the Indiana State Museum if accepted by the museum, Schepman said.

Richards, who has excavated more than a dozen mastodons in the past 35 years, is leading research and advising the family on preservation.

“In southern Indiana, normally [mastodon bones] are found along river basins (including) the White River, the Wabash (and) the Ohio rivers,” he told News 8. “They tend to be isolated bones.”

It’s rare for numerous mastodon bones to be discovered in close proximity to each other in southern Indiana, Richards said.

Fewer than five mastodon discoveries have been reported in southern Indiana since the 1920s.

International media coverage of the Seymour discovery surprised both Schepman and Richards, they said.

“Well, maybe people need a little bit of relief from some of the normal news,” Richards said, laughing.

News 8’s broadcast also deviated from the norm when the reporter assigned to this story arrived on set with a loaner bone.

Schepman generously lent the 9-inch piece of fossilized mastodon to the station for its Friday evening newscasts.