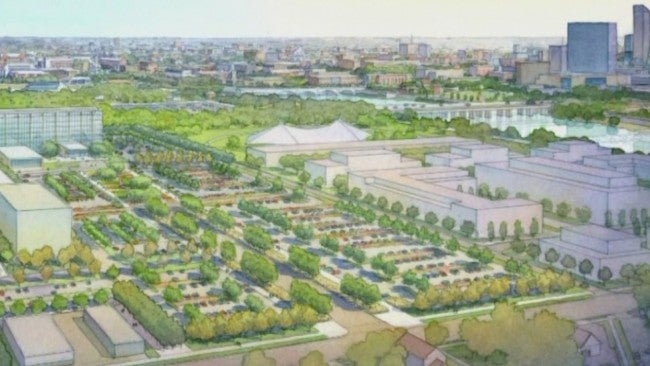 INDIANAPOLIS (WISH) – Delaying a decision on a new Marion County Justice Center is not welcome in Mayor Ballard’s office.

Tuesday night, a committee of the City County Council evaluated the $400 million proposal. That committee approved the creation of a board that will oversee the project and report to the full council. Board members will be made up of appointees from the mayor’s office, two appointees from the city county council and the Marion County sheriff or someone he appoints in his place.

“We are encouraged to see the Justice Center Board creation move forward,” said Jen Pittman, communications director for Mayor Ballard. “This is a critical step in the public vetting process, and we look forward to continued discussion with the council and community.”

The court office and jail complex will be built on part of the former GM Stamping Plant in Indianapolis, if Mayor Greg Ballard has his way.

In fact, Ballard told 24-Hour News 8 a decision on the Justice Center is one reason he decided not to seek re-election. Ballard described the partnership on the project as “the last thing that had to be done.”

“I mean, that was one that had been kicked down the road for a long time,” Ballard said. “We think we’ve figured it out, financially,” Ballard said. “So, I hope the council acts appropriately on it.”

The proposal is described as a public-private partnership with WMB Heartland and Justice Partners. The combination would finance, operate and maintain the new complex at 340 South White River Parkway West Drive.

Ballard worries that a delay, now, misses “a window of opportunity that may not come up again for a long time.”

“If we don’t get it done now, it may cost us hundreds of millions more in the future,” he said. “So, I’m hoping that they get it done right now.”

“Right now, all that’s been presented to us is what the administration has provided,” she said.

“We’ve hired an outside consultant that will take a look at the numbers and then dive in deeper and really see can we really afford this project or not,” said Council President Maggie Lewis. “I believe most of the Councillors believe we do need a new jail but can we afford this project this way?”

The committee also passed an amendment to make all documents pertaining to the project available for review.

“I’m not going to force my colleagues to rush through this process,” said Lewis. “We want to do what’s best for the taxpayers.”

The full council will take up the matter at a meeting next week.