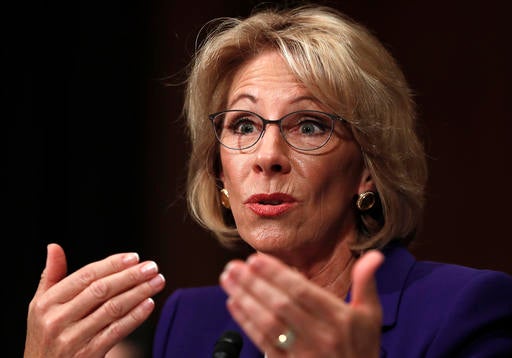 WASHINGTON (AP) – The Latest on developments in Congress (all times local):

After a heated debate Tuesday morning, senators on the Health, Education, Pensions and Labor Committee have voted 12-11 along partisan lines to support DeVos’ nomination, sending it to the full Senate for action.

But two prominent Republicans on the committee, Sens. Susan Collins of Maine and Lisa Murkowski of Alaska, are expressing their skepticism over DeVos. They say they are not yet sure whether they will vote for her on the Senate floor.

Murkowski says DeVos has yet to prove that she deeply cares about America’s struggling schools and its children. Murkowski says the nominee has not yet earned her full support.

The AFL-CIO is urging the Senate to reject President Trump’s pick for to lead the Labor Department.

He added that Puzder’s record as CEO of CKE Restaurants, Inc., could risk government protections on overtime and worker safety. He noted that Puzder is opposed to a big hike in the minimum wage and could “torpedo” pay rules on certain federal contracts.

Puzder has said that “the right government policies can” produce more jobs and better wages. His confirmation hearing is expected Feb. 7.

Democrats have widely panned Puzder’s nomination in similar terms. But Republicans control the Senate and there’s no sign Puzder’s confirmation is imperiled.

Democratic Sen. Maria Cantwell of Washington state says she is disturbed that President Donald Trump has removed the energy secretary from a permanent positon on the National Security Council. Trump removed the energy chief as part of a shake-up that also ousted the chairman of the Joint Chiefs of Staff and the director of national intelligence.

Cantwell, the senior Democrat on the Senate energy panel, said the energy secretary has a key role in safeguarding the nation’s nuclear stockpile. Former Energy Secretary Ernest Moniz, a nuclear physicist, played a crucial role in developing the 2015 agreement aimed at preventing Iran from developing a nuclear weapon.

Cantwell said “now is not the time to remove the energy secretary” from the national security post, noting that the Iran deal is “based so much on science.”

Republican and Democratic senators are clashing over the nomination of charter school activist and wealthy Republican donor Betsy DeVos as education secretary.

He says he respects his colleagues and doesn’t question their motives or votes but thinks “their concerns are misplaced.”

Sen. Patty Murray of Washington State, the top Democrat on the committee said it was clear that DeVos is “the wrong choice.”

Murray charged that DeVos has spent her family’s wealth to push “extreme anti-student ideology” siphoning money away from public schools “toward taxpayer funded private school vouchers, with little accountability, for just a few.”

Democratic senators held an abruptly called briefing for reporters outside the hearing room. They said they were demanding more information about the two nominees, GOP Georgia Rep. Tom Price to be Health secretary and financier Steve Mnuchin to head the Treasury Department.

The Democrats cited separate newspaper reports about Price’s trading in a health company stock and Mnuchin’s behavior involving foreclosures when he was a banker.

Finance Committee Chairman Orrin Hatch said he planned to reschedule the votes but did not say when. He said Democrats “ought to stop posturing and acting like idiots.”

Sen. Dianne Feinstein of California says she can’t reconcile the independence required in the job “with the partisanship this nominee has exhibited.” Sessions was one of Trump’s earliest supporters.

The Senate Judiciary Committee is meeting Tuesday to vote on the nomination.

Feinstein also praised Sally Yates, the former acting attorney general who was fired by Trump Monday after she publicly questioned the constitutionality of his refugee and immigration ban.

“That statement took a steel spine to stand up and say no,” Feinstein said. “That is what an attorney general must be willing and able to do.”

Feinstein said she has “no confidence” Sessions would do that.

Attorney general nominee Jeff Sessions says he had no role in helping the White House draft an executive order on refugees and immigration.

In responses to Vermont Sen. Patrick Leahy about his involvement in writing executive orders, Sessions wrote: “None. Neither I, nor any of my current staff, had such a role.”

The Judiciary panel is meeting to vote on Sessions’ nomination. Senate Judiciary Committee Chairman Charles Grassley defended the Alabama senator, who has been one of President Donald Trump’s strongest supporters.

“It’s not clear to me why it would be a problem even if he had been involved,” Grassley said.

President Donald Trump’s nominees met little resistance in the panel Tuesday morning. The committee voted 16-6 for Zinke and 16-7 for Perry.

The nominations now go to the full Senate.