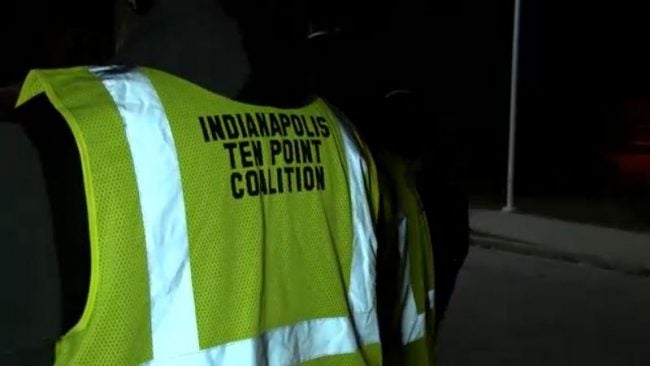 INDIANAPOLIS (WISH) — The Indianapolis Ten Point Coalition is being recognized by the FBI for their work in reducing violence in the community. The coalition is being awarded the FBI Director’s Community Leadership Award Monday morning.

Ten Point Coalition leaders call this humbling. They are optimistic about what this could mean moving forward.

Wallace Nash is the Butler-Tarkington lead for the Indianapolis Ten Point Coalition. He’s lived in the neighborhood for more than 50 years and says he’s seen the positive impact the group has had.

“A year or so ago this was a very violent street. This intersection here, this street period, but as you can see it is nice and quiet now,” said Nash while walking through Butler-Tarkington Tuesday night.

It’s been more than 450 days since there’s been a homicide in Butler-Tarkington. The Crown Hill and United Northwest Area neighborhoods have also seen a dramatic drop in violence. The statistics caught the attention of the FBI.

“It is just remarkable of the work that they are doing and now people are recognizing that,” said Reverend Charles Harrison.

Rev. Harrison says the special agent in charge at the FBI’s Indianapolis office called him Monday and told him the group was being honored.

“He really talked about the impact that Ten Point has had in the city of Indianapolis, particularly in the three neighborhoods that we are working in. Not just what we do on the ground — we try to redirect the lives of our young people on a pathway to success. We talked about our impact in working with the neighborhood police, business community, a holistic approach,” said Rev. Harrison.

The award comes one week before Councilor Jeff Coats plans to introduce a proposal restoring city funding for crime-fighting groups like the Ten Point Coalition.

“We appreciate the FBI recognizing us. We tip our hats to them, but we have to come closer to home. We have to get our city leaders to acknowledge what is happening here and to adopt this program throughout the city and push for it,” said Nash.

Nash said he is hoping this award helps inspire city leaders to provide funding for the group so they can expand. He wants other neighborhoods to experience the same drop in violence.

Ten Point Coalition members will meet with the local FBI office on Monday. They will travel to Washington to receive the award in April.