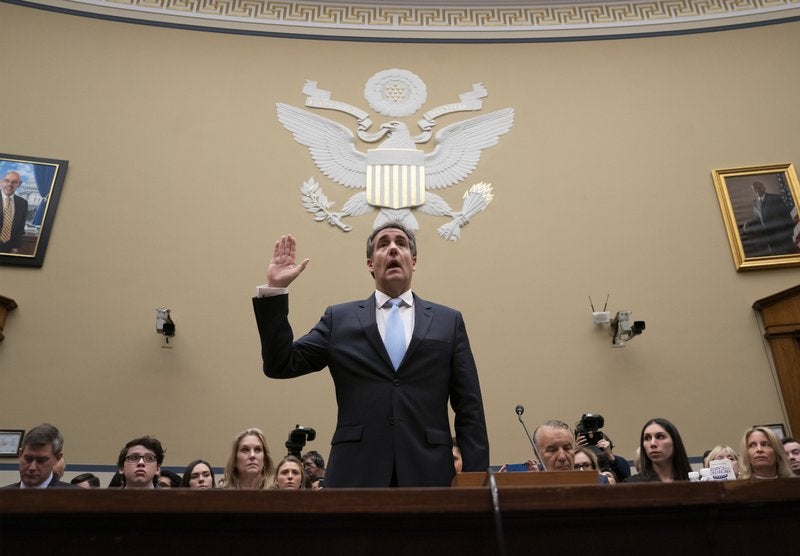 In a tweet, Trump said Cohen’s manuscript was a “love letter” to him and said Congress should demand the manuscript as evidence Cohen’s testimony this week was “fraudulent” and “dishonest.”

Cohen told a House panel Trump was a “racist,” ″con man” and liar. He testified that Trump used his inner circle to cover up politically damaging allegations about sex, and lied throughout the 2016 election campaign about his business interests in Russia.

“Congress must demand the transcript of Michael Cohen’s new book, given to publishers a short time ago,” Trump tweeted. “Your heads will spin when you see the lies, misrepresentations and contradictions against his Thursday testimony. Like a different person! He is totally discredited!”

Cohen testified to the House Oversight committee in public Wednesday and to a House intelligence panel behind closed doors on Thursday.

Reports last year indicated Cohen was shopping a book, one favorable about Trump, and that Cohen had an agreement with a Hachette Book Group imprint before his legal troubles ended the deal.

A person familiar with negotiations confirmed Cohen’s book was submitted for auction, and that Hachette discussed an offer, but didn’t reach a deal. The person spoke on condition of anonymity because the person wasn’t authorized to speak on the record.