Umbarger reflects on more than 45 years in the military 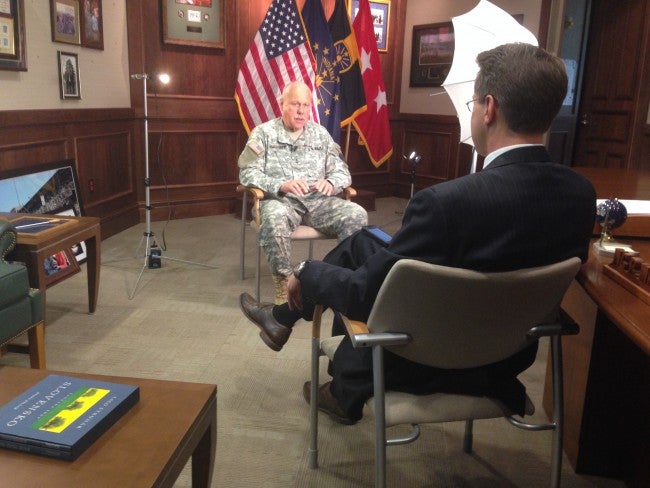 INDIANAPOLIS (WISH) — If you saw Martin Umbarger in civilian clothes, you probably wouldn’t guess what he’s done for the last eleven years.

Just talking to him, you find a tall, soft-spoken man.  Probably not the stereotypical image of a military man.

Martin Umbarger – Major General Umbarger – is about to retire as Adjutant General for Indiana.  For the last eleven years, he has been the leader of the state’s Army and Air National Guard and the Indiana Guard Reserve.  He’s been the commander of 15,800 people.

He told 24-Hour News 8 he “never, never dreamed of becoming a general, let alone making the military a career.”

“Looking back a little bit, I can’t believe it’s been over 45 years,” he said.  And, as he reminisces, he recalls “how much of an honor and privilege it’s been to wear this uniform.”

We talked in his office at Stout Field, southwest of downtown.  Looking around, you see an array of memorabilia from his years in the service.

A picture of him with Governor Frank O’Bannon who presented Umbarger’s first star.  A picture with Governor Joe Kernan who promoted him to Adjutant General, and pictures with the Governors who kept him there, Mitch Daniels and current Governor Mike Pence.  “I’ve been very fortunate to work for three great leaders.”

The honor and privilege he recalls is not just for the opportunity to wear the uniform, but also for the people who have worn it with him.

“We’ve deployed over 23,000 Indiana National Guardsmen all over the world,” during Umbarger’s years.  The General is clearly proud of them.

“Every time there’s a conflict,” he says, “Hoosiers are willing to raise their hand and leave their homes and go off and serve and protect our freedoms and come back.”

Umbarger is also grateful to everyone who supports the soldiers and airmen, the families left behind at every deployment and the employers who accept the challenges of hiring citizen soldiers.

The call to duty as Adjutant General caused some concern about his own business when Governor Kernan offered the opportunity for this state command.  Umbarger said he told Kernan he didn’t want his Umbarger & Sons Show Feeds in Bargersville to suffer because he wasn’t there.

Umbarger recalls a meeting, some months after the transition, when Kernan asked about the business.  Umbarger said he had learned he was not as important as he thought.  The business was running well.

That’s the kind of humility that seems such a prominent part of General Umbarger.   He said the decisions he made were not designed to impress other commanders or anyone at headquarters.  His interest, he said, was the soldiers and airmen.  As he retires, he hopes they know “I really cared for them.”

Martin Umbarger has lived the motto above a hallway at Stout Field: “National Guardsmen are Citizens most of the time, Soldiers some of the time, Patriots all of the time.”

Now, after Saturday’s retirement, his patriotism proven, he can learn what it’s like to be a full time citizen.