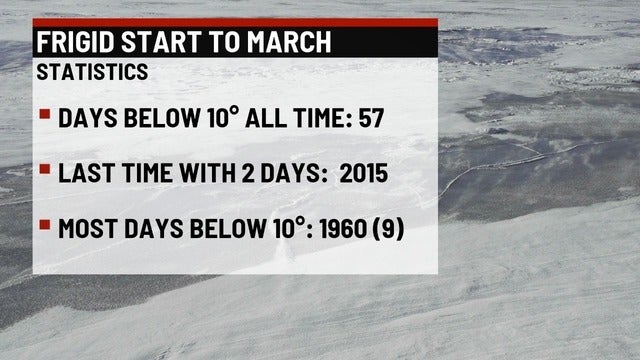 We tied a record in Indianapolis at 2. The previous record was set back in 1873!

Including Monday monring, we have only had 57 days in March with a recorded low temperatures below 10.

Even more than that, we have only had 24 years that the month of March produced two or more days with a low temperature below 10. With the cold air settling in again for Monday night into Tuesday morning, we’ll likely tack on another day.

The most March days with temperatures below 10 was back in 1960. That was also the coldest March on record, with an average temperature of 26.2.

While it may not feel like it, meteorological spring kicked off Friday. In terms of snowfall, we were not too far off the average, picking up just under 17 inches of snow. The three-month average for Decebmer, January and February is 22 inches. Last year at this time, we only picked up around 9 inches of snow. This winter ranks as the 61st snowiest winter.

Despite the record-breaking cold to wrap up the month of January, we still ended up with a relatively mild winter, ranking as the 37th warmest all-time with an average temperature of 32.6.

We will see a significant jump in temperatures through the month of March. Average highs for the start of the month should be in the middle 40s but move closer to 60 heading into the start of April.