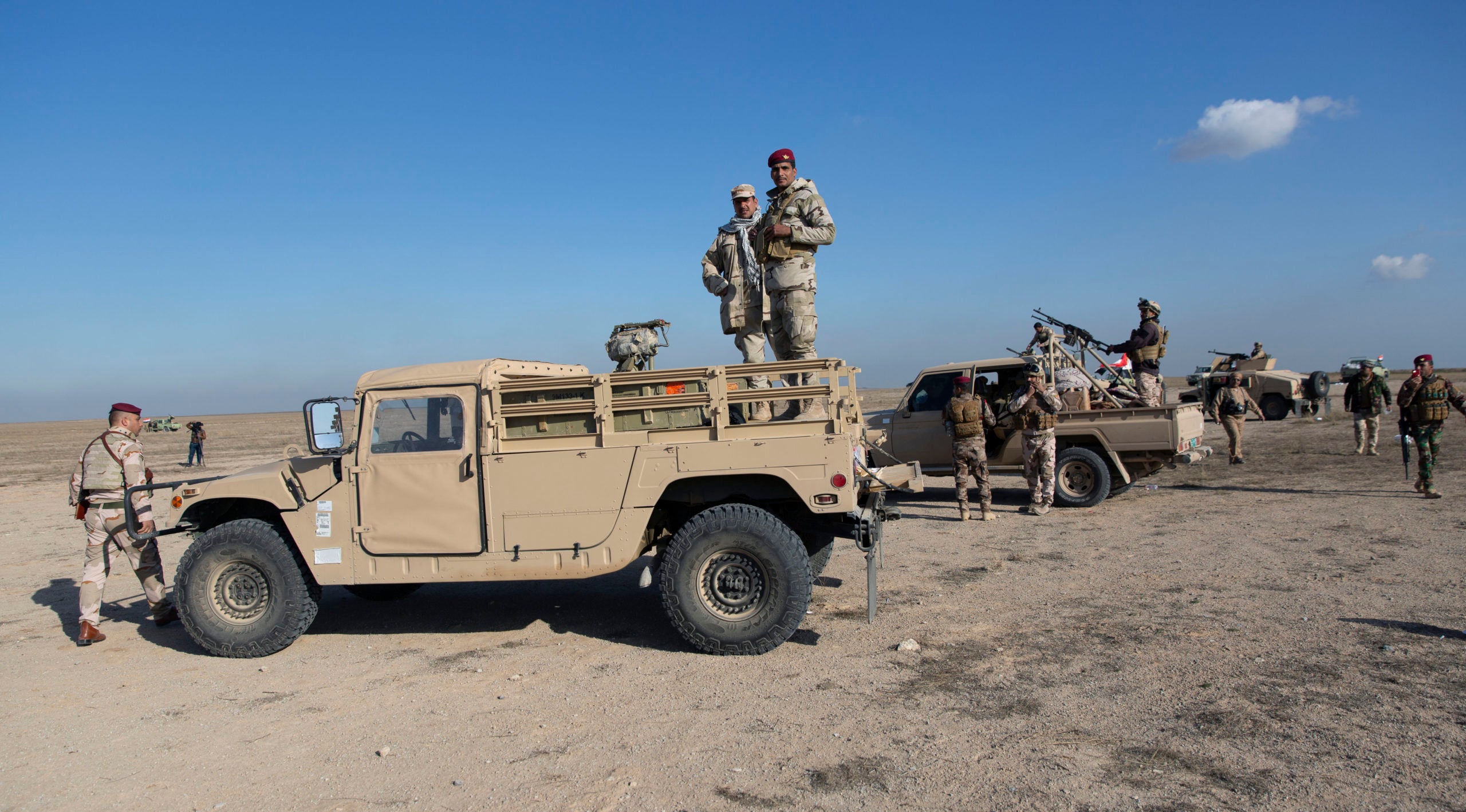 Secretary of State Mike Pompeo said the strikes send the message that the U.S. will not tolerate actions by Iran that jeopardize American lives.

The U.S. blames the militia for a rocket barrage Friday that killed a U.S. defense contractor at a military compound near Kirkuk, in northern Iraq. Officials said as many as 30 rockets were fired in Friday’s assault.

Esper said the U.S. hit three of the militia’s sites in western Iraq and two in eastern Syria, including weapon depots and the militia’s command and control bases.

U.S. Air Force F-15 Strike Eagles carried out the strikes and all the aircraft safely returned to their home base, Esper said. At the ammunition storage facilities that were struck, significant secondary explosions were observed.

Pompeo, Esper and Gen. Mark Milley, chairman of the Joint Chiefs of Staff, flew to Palm Beach, Florida, after the operation to brief President Donald Trump.

Esper said they discussed with Trump “other options that are available” to respond to Iran.

“I would note also that we will take additional actions as necessary to ensure that we act in our own self-defense and we deter further bad behavior from militia groups or from Iran,” Esper, who was accompanied by Pompeo and Milley, said in a brief statement to reporters in a ballroom at Trump’s Mar-a-Lago club, where the president is on a more than two-week winter break.

The national security officials did not answer any questions.

Pompeo said the “decisive response” makes clear that the U.S. ”will not stand for the Islamic Republic of Iran to take actions that put American men and women in jeopardy.”

Trump was at Mar-a-Lago but did not appear with his top national security officials. Shortly after Pompeo and Esper spoke, he left for dinner at his private golf club in West Palm Beach.

Iraq’s Hezbollah Brigades, a separate force from the Lebanese group Hezbollah, operate under the umbrella of the state-sanctioned militias known collectively as the Popular Mobilization Forces. Many of them are supported by Iran.

Kataeb Hezbollah is led by Abu Mahdi al-Muhandis, one of Iraq’s most powerful men. He once battled U.S. troops and is now the deputy head of the Popular Mobilization Forces.

In 2009, the State Department linked him to the elite Quds Force of Iran’s Revolutionary Guard, designated a foreign terrorist organization by President Donald Trump earlier this year.

The U.S. maintains some 5,000 troops in Iraq. They are there based on an invitation by the Iraqi government to assist and train in the fight against the Islamic State group.

The militia strike and U.S. counter-strike come as months of political turmoil roil Iraq. About 500 people have died in anti-government protests in recent months, most of them demonstrators killed by Iraqi security forces.

Abdul-Mahdi had made no public comment on Friday’s militia attack but condemned the U.S. retaliatory strike on Sunday. He called it a violation of Iraqi sovereignty and a “dangerous escalation that threatens the security of Iraq and the region.”

In a statement, Abdul-Mahdi said Defense Secretary Mark Esper had called him about a half-hour before the U.S. strikes to tell him of U.S. intentions to hit bases of the militia suspected of being behind Friday’s rocket attack. Abdul-Mahdi said in the statement he asked Esper to call off U.S. retaliation plans.

The statement said Iraqi President Barham Salih also received advance notice from a U.S. diplomat, and also asked unsuccessfully for Americans to call off it off.

This story has been corrected to show that about 500 people have died in recent anti-government protests, not nearly 600.