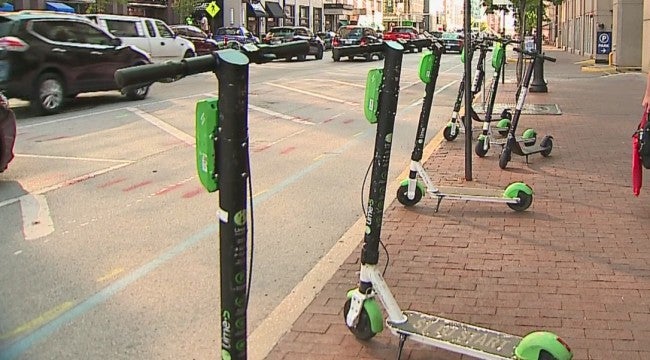 Someone is cutting the brake lines on Lime scooters.

“I didn’t notice anything out of the ordinary when I picked it up. But when I went to brake the first time, I noticed the brake line had been cut and it was kind of even wagging around a little bit,” said resident Charles Elliott.

Using a scooter to get around downtown is something Elliott does quite often.

But he said his ride on Monday was different.

The scooter he picked up at the corner of Pennsylvania and Ohio Streets was vandalized.

“It did appear to be cut, it didn’t look like an accident. It was just right here, just right in the middle like somebody had cut it with a pair of scissors,” Elliott said.

Luckily, Elliott jumped off the scooter before anything happened.

Elliott said he filed a police report with IMPD and took to Twitter to warn others.

News 8 reached out to Lime. A spokesperson for the company said they have had two scooters in Indianapolis with brake lines cut and released the following statement:

Vandalizing property is not only a crime, it’s dangerous and directly harms those who rely on these vehicles everyday as an affordable, convenient way to get around. Lime will pursue appropriate legal action against those who vandalize our property and put innocent riders in harm’s way.”

Scooter riders in Indy are on edge after hearing the news.

“To know that the one that I use for my daily, weekly commute, could be that. That’s some scary stuff,” said scooter rider Ben Wallace.

“Wow! If that were us, we’d been out in the middle of the road,” scooter rider Jay Sadler added.

Indianapolis isn’t the only city where this has happened.

Just last week, a man in Florida was arrested for cutting the brakes on more than 140 scooters.

In Kentucky, more than a dozen scooters had their brake lines cut in August.

In the meantime, Elliott hopes police find whoever is behind this, before someone gets hurt.

“Yeah that’s my thing, I don’t want anybody to be hurt riding a scooter. We all deserve safe modes of transportation,” said Elliott.

Lime says so far they have not heard of anyone getting injured in Indianapolis from the brake lines being cut.

They encourage you to inspect your scooter before getting on it, and if you do see damage, contact Lime and police.