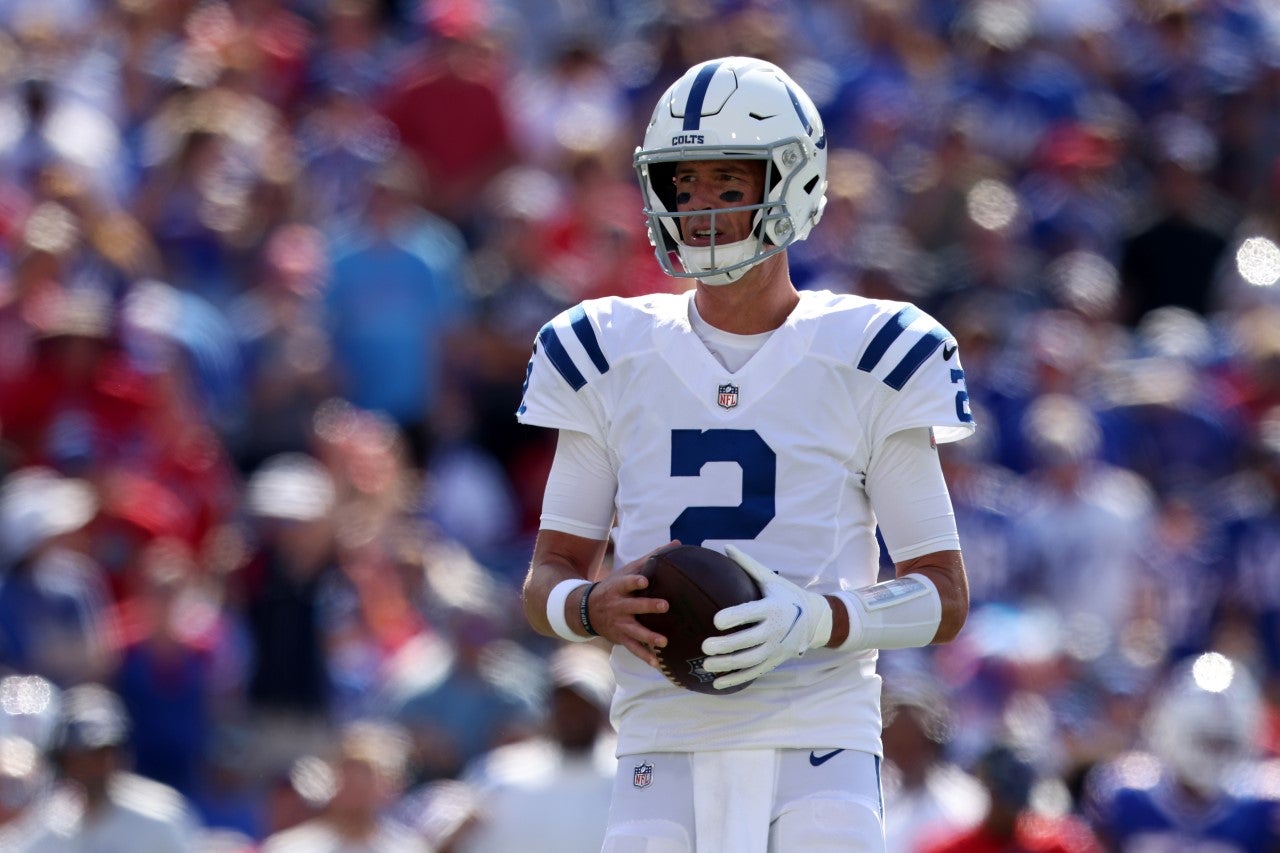 INDIANAPOLIS (WISH) — Saturday evening the Bills defeated the Colts 27-24 in Buffalo to open the preseason which was headlined by Quarterback Matt Ryan’s debut with Indianapolis following 14 seasons in Atlanta.

All-pro running back Jonathan Taylor was the Colts’ lone healthy starter who did not play, with All-pro linebacker Shaquille Leonard (back) staying back in Indianapolis as he continues to recover from surgery in early June.

Thanks to a choppy, turnover-filled first quarter from both sides, Ryan played into the second quarter finishing four series that netted just 61 total yards and three points. Ryan’s top throws were a pair of connections (17 & 13 YDS) to Michael Pittman Jr., finishing 6/10 for 58 yards which included a dropped pass by Parris Campbell and one sack.

A chance for Ryan to capitalize on an early turnover deep inside Bills territory was thwarted by a penalty on 4th & goal at the one-yard line. Instead, Frank Reich settled for Rodrigo Blankenship’s lone field goal of the game. The three points were the only points from the Colts’ offense under Ryan’s command.

During the in-game broadcast, Ryan weighed in on his preseason debut: “It feels good, it really does,” Ryan said. A little bit surreal this morning coming in and seeing the locker set up and just putting on the uniform. I’m excited to be here, excited to be a part of this group. Just a ton of fun today… Just to hear the operation, a new voice in the headset, all those different things. Be with those guys, communicate at the line of scrimmage, I thought that part was good. I would have liked a little more production from all of us, but you know, it’s a good start for us.”

After finishing this past season second in the NFL in takeaways, the Colts defense was back at it under new DC Gus Bradley.

In total, the unit forced five turnovers including interceptions for veteran safety Rodney McLeod, third-year cornerback Isaiah Rodgers, and undrafted rookie and Cicero, Ind. native Sterling Weatherford. Weatherford finished with a team-high 8 tackles. In addition to the interceptions, the Colts’ leading tackler from one season Bobby Okereke channeled his inner Leonard, forcing a fumble with the help of safety Julian Blackmon following a Bills reception which was recovered by Isaiah Rodgers.

On the next Bills drive, defensive lineman Cameron Cline, who is fighting for a roster spot, came up with a strip sack of Case Keenum. Overall, the Colts’ starters on defense worked the first two series holding Buffalo scoreless, and the second unit continued to harass Keenum who finished 11/18, 86 YDS, 2 INT, and was sacked twice (Cline, Ben Banogu).

Second-round pick Nick Cross out of Maryland, a rare draft pick added by Chris Ballard via trading up, got the nod as the starter over McLeod who was picked up in free agency following six solid seasons in Philadelphia. Cross came to play on his first NFL preseason drive, coming up to stop a Bills running back on third and goal and playing solid pass coverage on the very next play to hold Buffalo scoreless on its first drive.

McLeod subbed in for the second drive, making an easy interception on a ball that was tipped at the line. Bradley will certainly need both of these players, but the thought of Cross starting the season-opener in Houston next month, just one day after his 21st birthday, is a story within itself.

A quiet day for top wide receivers outside of MPJ

Outside of Pittman Jr.’s two receptions, none of the Colts’ top five projected wide receivers put together a stellar day. Second-round pick Alec Pierce played the opening quarter-plus, collecting two catches for 27 yards on three targets. Campbell was targeted twice, tallied one drop, and no catches.

Ashton Dulin, who has arguably had the best training camp of any Colt, was also held without a reception. Without question, the most intriguing part of this coming week’s joint practices with Detroit in Westfield, Ind. will be how the Colts’ unproven wide receiving corps fair in more game-like competition.

This January, as the Colts started their soul-searching at quarterback, I asked General Manager Chris Ballard about Sam Ehlinger’s rookie season in Indianapolis. His response: “We like Sam, we like him. Thought he had a pretty good preseason, and we definitely think he is made of all the right stuff. Whether he is good enough, we still have to find out.”

The former Texas Longhorns star started his sophomore NFL season with a bang, finishing 10/11 for 88 yards and 2 touchdowns. Both of his touchdown throws came out of the pocket, on the run, an option the Colts currently don’t have with Ryan or Foles. For Ehlinger, this appears to be a perfect understudy opportunity with Ryan’s leadership guiding the way in 2022.

Elsewhere at quarterback, Foles finished 7/11, 92 YDS, 1 TD, 1 INT (lost fumble returned for a touchdown), and the undrafted rookie out of Notre Dame Jack Coan closed out the game 1/5, 0 YDS.

Concerns over Reich’s inexperienced tight end room were quieted Saturday, as second-year pro Kylen Granson and rookie Jelani Woods put together two of the most impressive catches of the game. Granson, who is fighting to establish himself as the second tight end behind Mo Alie-Cox, found open space on two different occasions during a touchdown drive with Nick Foles including a 23-yard reception that stands as the Colts’ longest play of the preseason opener.

Woods, who hasn’t flashed much at camp, came alive late in the first half highlighted by an 11-yard touchdown catch in traffic over the middle to give the Colts a 10-7 lead at intermission. Woods finished with two catches for 22 yards and the touchdown. Late, undrafted rookie tight end Michael Jacobson, who played basketball at Iowa State, added to the unit’s bragging rights by hauling in Ehlinger’s second touchdown toss of the day.

Blackmon, who ruptured his achillies at practice this past October, was back on the field for his first in-game action since the injury. The prized free-agent addition on defense, Stephon Gilmore, played the team’s first series, alongside edge rusher Yannick Ngakoue who also made his Colts preseason debut. Neither recorded a tackle in their short stints on the field.

Cornerback Brandon Facyson, who like Ngakoue joins on in Indianapolis following spending this past season in Las Vegas, once again remained the Colts’ third starting cornerback ahead of Rodgers.

Incumbent kicker Rodrigo Blankenship finished 1/1 on FGs and 1/1 on XP, topping Jake Verity who missed his lone XP try of the game. It was a slow day for action in this battle, which has been fairly even up to this point at Grand Park.

The Colts’ viral moment of the evening came backup offensive lineman Wesley French and Will Fries stood in the huddle together. Hang it in the Louvre: