Woman caught driving with dog tethered to back of Jeep 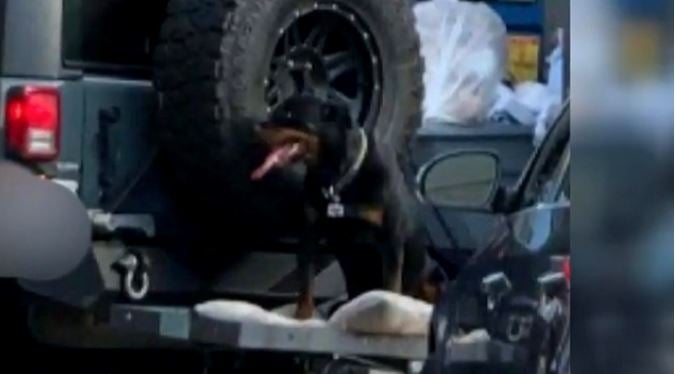 HUNTERSVILLE, NC (WFLA/WCNC) – A woman in North Carolina was caught driving with her dog tethered to the back of her car.

Witnesses and people on social media are expressing outrage for fear of the dog’s lack of safety.

“Somebody could rear-end her and he would have no chance,” said one witness.

The driver was spotted all around town over the past few days taking the dog on a dangerous drive on busy roads, even on the back bumper in a fast food drive-through.

Other drivers tried to get her to stop.

Thousands on social media are demanding the driver face charges.

Huntersville police say she probably will.

A spokesperson said this is a crime, called “conveying animals in a cruel manner.”

The driver could be arrested if police can find her.

Police posted pictures on Twitter and Facebook on Tuesday, hoping to track her down before the dog winds up dead.

Police say they know who she is thanks to her license plate, but they still haven’t been able to track her down.

They still don’t know if the dog is okay.

“Just one sharp turn from falling off a platform and hanging itself basically,” said a witness.