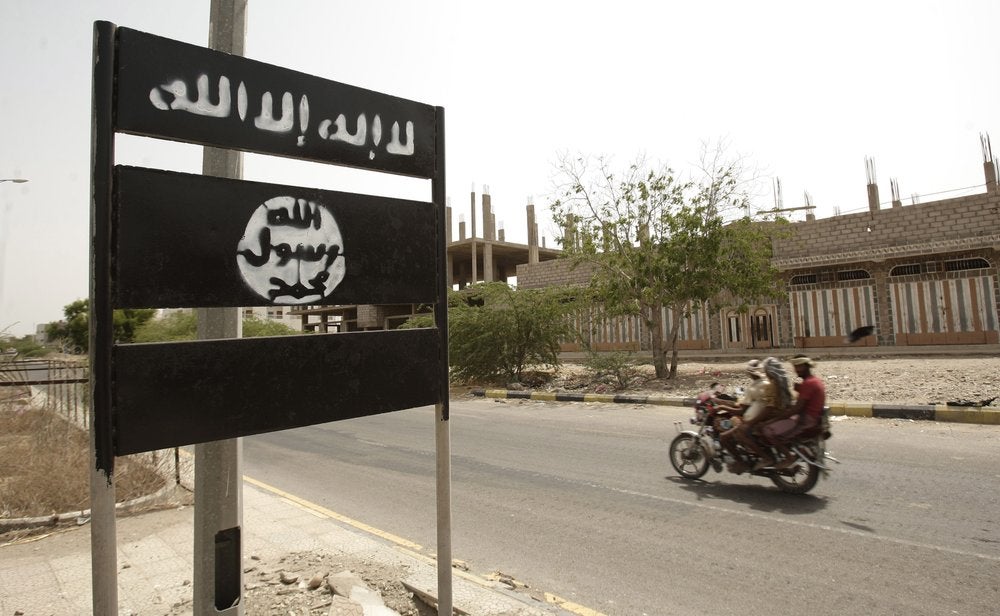 FILE - In this June 15, 2012, file photo, an al-Qaida logo is seen on a street sign in the town of Jaar in southern Abyan province, Yemen. Yemeni officials and tribal leaders say al-Qaida militants targeted a military camp in southern Abyan province with rocket propelled grenades and automatic rifles around midnight, setting off clashes that lasted until early morning on Friday, Aug. 2, 2019. Arabic on the logo reads: "There is no god but God," and "Muhammad is the messenger of God." (AP Photo/Hani Mohammed, File)
by:
Posted: Aug 2, 2019 / 05:57 AM EST / Updated: Aug 2, 2019 / 05:57 AM EST

The attack began around midnight, with militants firing rocket propelled grenades at the camp belonging to members of a Yemeni force trained by the United Arab Emirates, a member of the Saudi-led coalition fighting the Houthi rebels in Yemen since 2015.

The militants then overran the camp, seizing and confiscating equipment and weapons, before setting it on fire, according to the tribal leaders. There was no immediate claim of responsibility by al-Qaida but the officials said the attack bore all the hallmarks of the Sunni militant group.

The attack came a day after the main southern city of Aden was shaken by double attacks. The Houthi rebels fired a missile at a military parade of the same UAE-trained militia known as the Security Belt while suicide bombers blasted a police station in another of the city’s neighborhoods.

At least 51 people were killed in the double attacks — the deadliest day in Aden in nearly two years. The city has been the seat of Yemen’s internationally recognized government, which is at war with the Houthis.

For nearly four years, Yemen has been torn by the civil war between the Iran-backed Houthi rebels, based in the capital, Sanaa, to the north, and the government forces, backed by the Saudi-led coalition.

Islamic militants — both Yemen’s al-Qaida branch and the Islamic State group’s affiliate in the country — have exploited the chaos of the civil war to carry out bombings, shootings and assassinations in an effort to expand their footprints in Yemen, the Arab world’s most impoverished country.

In Thursday’s attacks in Aden, the Houthis announced they had fired a ballistic missile at the camp of the UAE-trained forces. No group has so far claimed responsibility for the attack on the police station.

Following the deadly attack in Abyan, to the east of Aden, security officials said the UAE-trained force sent reinforcements to pursue militants who had ransacked the Security Belt’s camp.

The Yemeni officials and tribal leaders spoke on condition of anonymity, the officials because they were not authorized to talk to reporters and the tribal elders because they feared reprisals.