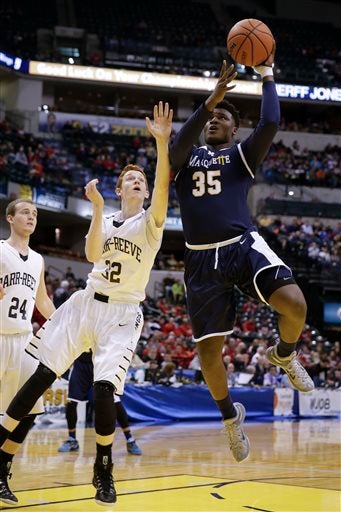 INDIANAPOLIS (AP) – When the Class A boys state basketball Finals tipped Saturday at Bankers Life Fieldhouse, it seemed familiar – at least at the start.

But in the end, Barr-Reeve avenged its four-point overtime loss to Marquette Catholic in last year’s state finals with a decisive 65-50 win over Marquette.

“From losing last year, it gave us a little more energy coming into it,” said Barr-Reeve junior Logan James. “We knew what to expect from their pressure.”

The win gave Barr-Reeve its first boys basketball state crown after being a four-time runner-up.

“This is the great state of Indiana and being a high school basketball coach, this is what everybody shoots for,” Barr-Reeve coach Bryan Hughes said. “I feel blessed right now and it will sink in at some point.”

Roy, who was limited in practice this week due to an ankle injury, said he knew he “had to be aggressive on the offensive end.”

“I came out and hit a couple shots and my groove going and just tried to stay aggressive the rest of the game,” Roy said.

Roy and Swartzentruber were 5 of 12 from beyond the arc and handled the outside while Addison Wagler patrolled the paint. The 6-foot-5 center accounted for six of the Vikings’ 22 points in the paint en route to a 12-point performance to round out Barr-Reeve’s double-digit scorers.

“This basketball team all year we have had different people that have stepped up,” Hughes said. “What made us this really good this year was the number of players that could step up at different times and make plays and make shots.”

Offense was not the only course of success for Barr-Reeve. The Vikings’ defensive pressure led to 11 Marquette turnovers that were converted into 18 points. The Blazers were scored just two points on seven turnovers.

“I thought defensively, the entire ball game, we were really good,” Hughes said.

Ryan Fazekas, a Providence (RI) College commit, scored a game-high 18 points for Marquette; just five came in the opening half.

With 3:53 to play in the first quarter Swartzentruber found Roy cutting through the lane for layup and a 7-5 lead for second-ranked Barr-Reeve (27-2). Roy followed with a 3-pointer on the next Vikings’ procession as they began to slowly pull away from fifth-ranked Marquette (24-7).

The Vikings trailed for just 39 seconds during the opening moments of the game and led 34-20 at the break.

Free throws proved to be a key to the Vikings win. Their 26 of 36 set a Class A Championship record for free throws made and for attempts.

“Barr-Reeve deserved to win today, it is about as simple as that,” Marquette coach Donovan Garletts said.” They played better than us in about every category of the game.”

Each team will now be forced to move up to Class 2A based under the IHSAA Tournament Success Factor.

It’s the second time this season Barr-Reeve has defeated Marquette. The two teams squared off in an early season battle that the Vikings took 70-58.

Duncheon, who plans on attending medical school, was the Class A Arthur L. Trester Award for Mental Attitude recipient for excelling in mental attitude, scholarship, leadership and athletic ability in basketball. He is the fifth member of his family to win the award.