No. 7 Maryland remains unbeaten in Big Ten with 84-74 win 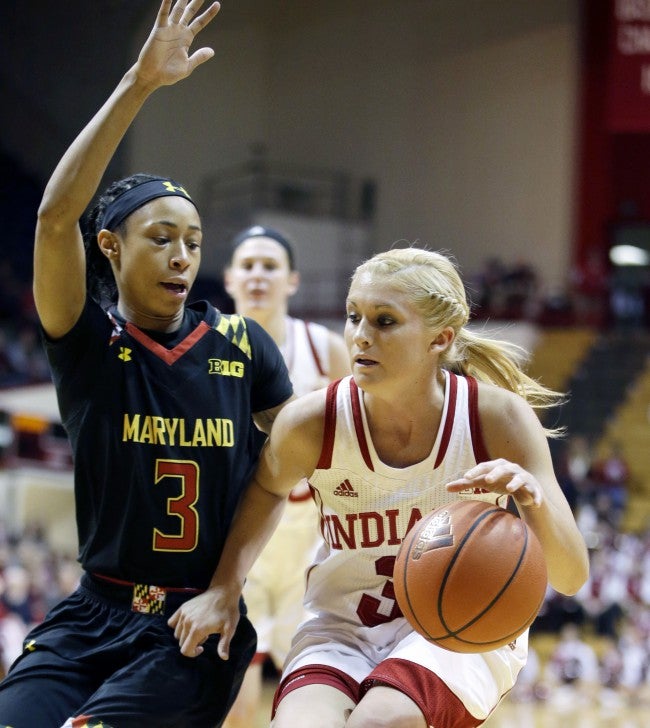 The Terrapins won their 11th straight Sunday defeating Indiana 84-74 and remained unbeaten in Big Ten conference play (17-2, 8-0). Sophomore Brionna Jones had a double-double, 10 points and 14 rebounds for the Terrapins.

“We thrive off energy, feeding off of each other and celebrating each other,” Brown said. “That’s when we’re at our best, when our bench is energized and coach B is energized and everyone is pumped up. Obviously today we didn’t show (energy). It definitely wasn’t the best that we’ve played, but top to bottom we had a lot of great moments throughout the team.”

The Hoosiers led early and tied with the Terrapins five times through the 12:44 minute mark in the first half. With the game tied at 15, Maryland finished the first half outscoring Indiana 32-14, leading 47-29 at the half. Maryland made 19 of its 30 attempts, shooting 63.3 percent in the first half.

Despite competing neck and neck early, the Hoosiers (12-7, 2-6) were outrebounded by the Terrapins 23-15 at the end of the first half and only shot 26 percent from the floor making eight of 31 attempts while going 0-11 from beyond the arc.

The final 10 minutes of the first half was a turning point for Maryland and indicative of the type of basketball the Terrapins have been playing over the last 11 games. The Terrapins outrebounded Indiana 40 to 27 for the game and finished shooting 54 percent.

“I thought we shared the basketball extremely well on the offensive end and we really started getting up and down our transition game,” Maryland head coach Brenda Frese said. “Lexi does a tremendous job as our floor general, Bri struggled a little bit and she still gets a double-double. Being able to have that inside-outside presence is key.”

Maryland continued to stretch its lead in the second half as Indiana faced its largest deficit, 24, trailing 57-33 with 15 minutes to play in the game. But the Hoosiers put together a 26-13 run that pulled them within 11 over a 10-minute span.

Indiana’s standout freshman Tyra Buss had 19 points and six assists. Alexis Gassion finished 18 points. A late surge by Indiana closed the deficit to 10 with under a minute to play when Gassion scored four points off of two consecutive steals during inbound passes from Walker-Kimbrough.

“(Buss) plays hard. She’s scrappy, gets to the rim and makes a lot of plays,” Frese said. “She’s hard to guard, really quick and athletic and can get to the rim. She’s just a really hard matchup. Indiana played a great game. I thought they played extremely hard for 40 minutes.”

Maryland: Sunday’s game was Jones’ fifth double-double this season. She leads the Big Ten conference in offensive rebounds per game at 5.4 against conference opponents. The Terrapins are the top scoring offense in the conference averaging 82.7 points.

Indiana: The Hoosiers have not won a conference game on the road since defeating Illinois on February 2, 2014.