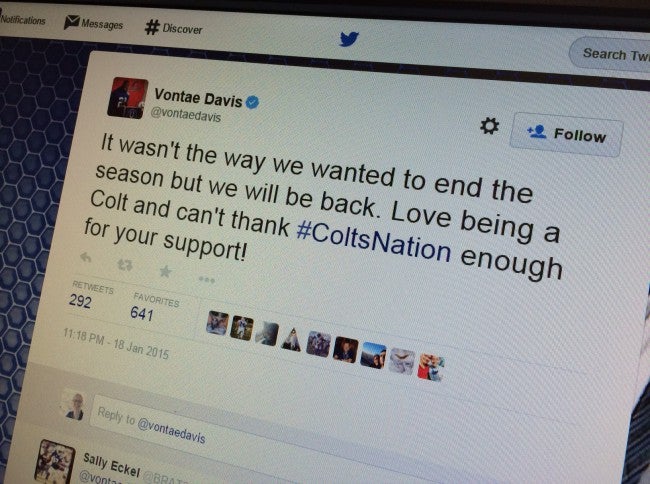 INDIANAPOLIS (WISH) – In the hours following a disappointing attempt at another Super Bowl appearance, fans of the Indianapolis Colts were quick to join conversations reacting to the AFC Championship game on social media.

Several people took to Twitter to express their support is steadfast.

@DrewBlairTV @Colts played their hearts out this season. To the point of exhaustion. And I want to thank them.— Douglas McMillan (@StormChaseIWX) January 19, 2015

Travis Smith had a message specifically for Colts wide receiver Reggie Wayne whose future has been a topic of speculation.

Not every fan stayed positive including one who questioned the team’s management.

@DrewBlairTV @WISH_TV colts last 2 #1 picks are inactive for most important game of GM career; why did we fire Polian? We need to be honest— Chris Bryant (@bryantology007) January 19, 2015

Some Colts players reflected through social networks, in some cases apologizing to supporters.

It wasn’t the way we wanted to end the season but we will be back. Love being a Colt and can’t thank #ColtsNation enough for your support!— Vontae Davis (@vontaedavis) January 19, 2015

The Indianapolis Colts ended the 2014-2015 season on Sunday with a 45-7 loss to the New England Patriots.