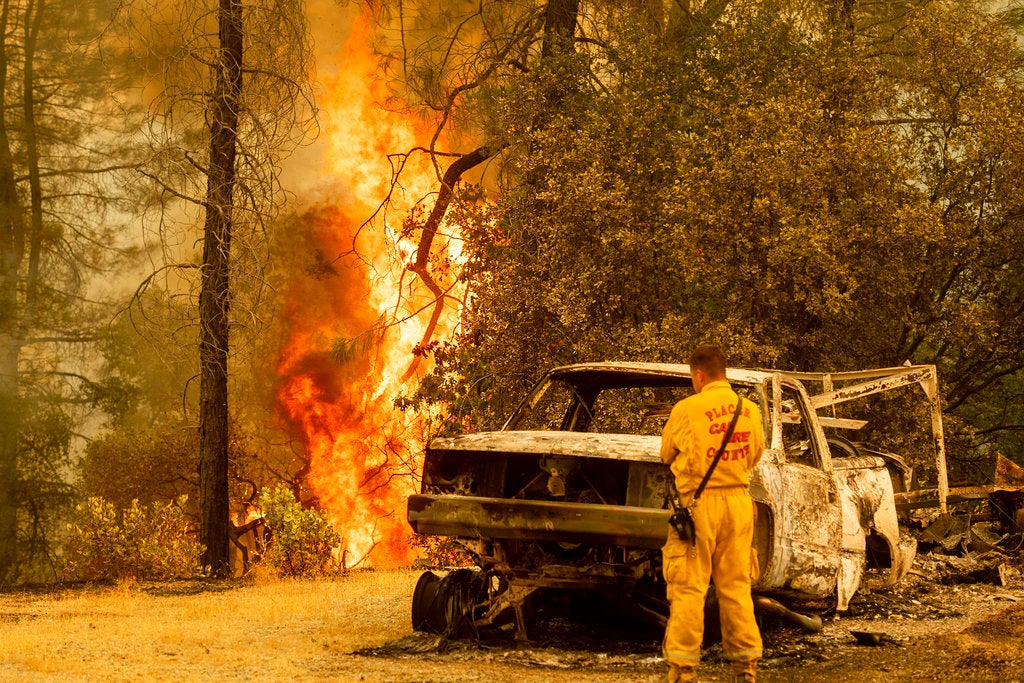 REDDING, Calif. (AP) — The death count from a rapidly growing Northern California wildfire rose to five Saturday after two young children and their great-grandmother who had been unaccounted for were confirmed dead.

“My babies are dead,” Sherry Bledsoe said through tears after she and family members met with Shasta County sheriff’s deputies.

Bledsoe’s two children, James Roberts, 5, and Emily Roberts, 4, were stranded with her grandmother Melody Bledsoe, 70, when walls of flames swept through the family’s rural property Thursday on the outskirts of Redding.

The three were among more than a dozen people reported missing after the furious wind-driven blaze took residents by surprise and leveled several neighborhoods.

Shasta County Sheriff Tom Bosenko said he expects to find several of those people alive and just out of touch with loved ones. Officers have gone to homes of several people reported missing and found cars gone — a strong indication they fled.

The fire sparked Monday by a vehicle in forested hills grew to 127 square miles (328 square kilometers). It pushed southwest of Redding, the largest city in the region, toward the tiny communities of Ono, Igo and Gas Point, where scorching heat, winds and bone-dry conditions complicated firefighting efforts.

It’s now the largest fire burning in California. The winds that aided firefighters in keeping the flames from more populated areas were propelling at a frightening rate in unpredictable directions.

“I don’t know why it’s doing what it’s doing,” Cal Fire Chief Steve Crawford said. “It’s burning in every direction all at the same time. … It’s burning as if it’s got strong wind on it even when there’s no wind.”

Two firefighters were killed in the blaze, including a bulldozer operator who was helping clear vegetation in the wildfire’s path. He was identified Saturday as Don Ray Smith, 81, of Pollock Pines. Redding fire Inspector Jeremy Stoke was also killed, but details of his death were not released.

About 38,000 people were under evacuation orders, 5,000 homes were threatened and the fire was just 5 percent contained.

The latest tally of 500 destroyed structures was sure to rise. A count by The Associated Press found at least 300 of those structures were homes.

Cal Fire officials said more than 10,000 firefighters were on the line, making progress on 14 large wildfires across California.

In the Redding area, authorities were investigating reports of looting in evacuated areas.

Police Chief Roger Moore said people were reportedly driving around evacuation zones and busting down doors of houses still standing. Sheriff Bosenko announced at a community meeting that authorities had made their first looting arrest, a parolee. Anxious residents cheered.

About 100 law enforcement officers and 260 National Guard soldiers were helping with evacuations and providing security in empty neighborhoods.

Moore was among the many who lost homes.

Greg and Terri Hill evacuated their Redding home of 18 years Thursday night with little more than medications, photo albums, clothes and firearms, assuming they’d be back home in a few days.

They returned Friday to find little more than ash.

The so-called Carr Fire wiped out forest around much of Whiskeytown Lake, burning dozens of boats docked at a marina and then swept through the historic Gold Rush-era town of Shasta and destroyed nearly all of Keswick, a hamlet just west of Redding.

The fire blew across the Sacramento River and burned a path to the property where Melody Bledsoe was living with her great-grandchildren.

Bledsoe’s husband, Ed, who had the couple’s only car, had gone to buy supplies before any evacuation order was issued, family members said.

His great-grandson phoned him at the store to say the flames were approaching and “we need your help,” according to Jason Decker, who is dating one of Bledsoe’s granddaughters.

Bledsoe rushed home, but was turned back by police because the fire was raging. He spent Friday searching in vain for the three at shelters while Decker’s girlfriend posted desperate messages on social media for any help locating them.

Decker rode his motorcycle up to view the property and found smoldering ruins too hot to enter.

“It looked like a war zone,” he said. “I couldn’t smell death in the air, which is good.”

While he discussed the worst-case scenario of the three staying put as the flames closed in, Decker held out some hope Saturday morning until he got the word they were dreading.

“We got horrible news. I have to go,” he said and hung up.